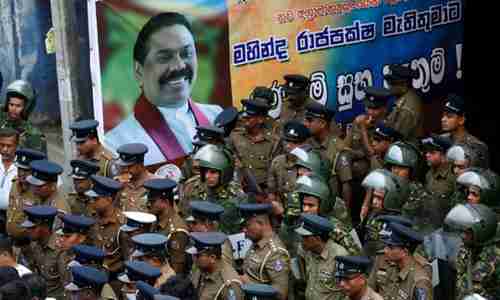 Mahinda Rajapaksa, a close ally of China and former president of Sri Lanka until he was defeated in a 2015 election, may be making a comeback as prime minister.

The fired prime minister, Ranil Wickremesinghe, has refused to leave the prime minister’s residence and hundreds of supporters have gathered outside.

Meanwhile, Rajapaksa has moved into the prime minister’s office and is starting to appoint a cabinet. So there are currently two prime ministers.

The president, Maithripala Sirisena, claims that he has the right to fire the prime minister and appoint a new one. His opponents say that it is unconstitutional and only the Parliament can fire a prime minister, and so the parliament should be called into session to decide who is prime minister.

Sirisena responded by announcing that the Parliament will remain closed until mid-November. This will give him to time to make sure that the members of Parliament are aligned behind his decision. However, the speaker of the Parliament said: “We need to solve this through Parliament. If we try to solve this in the streets it will lead to a major bloodbath.”

As the Prime Minister of Sri Lanka, I call upon all parties to assemble in parliament to regain our country’s peace, stability, and to vehemently defend the fundamental rights of our citizens. My expectation is that the Speaker [of Parliament] will exercise his constitutional rights and summon parliament within the next 2 days.

We ask the Honorable Speaker to summon Parliament urgently- only through the parliamentary system can we can save our country from this unfortunate and dangerous situation. Let us forget our political differences and rally to re-establish democracy in our country.

The reference to a “dangerous situation” is made because there has already been violence, including one person killed.

On Saturday, a pro-Wickremesinghe minister was confronted by a crowd of supporters of the president. The minister’s bodyguard opened fire on the crowd, killing one person and wounding two others. This followed the storming of two state-owned television stations by mobs of Rajapaksa supporters. Guardian (London) and NPR and Guardian

Mahinda Rajapaksa’s return to power will be welcomed by China

President Sirisena and fired prime minister Wickremesinghe have had a number of disagreements, especially because Wickremesinghe is “pro-India,” while Sirisena is “pro-China.”

In a bizarre manifestation of this difference, in mid-October Sirisena publicly accused India’s intelligence services of plotting his assassination. However, he spoke to India’s prime minister Narendra Modi on the phone the next day. Afterwards, Sirisena stated that the mischievous and malafide reports were utterly baseless and false, and seemed intended to create misunderstanding between the two leaders as well as damage the cordial relations between the two friendly neighbors.

Rajapaksa became president of Sri Lanka in 2005 but was defeated in the presidential election by Sirisena in 2015. The two men had maintained cordial relations, so in that sense, it was not a surprise that Sirisena decided to bring Rajapaksa back to power by appointing him prime minister after firing Wickremesinghe.

However, there is a great deal of hostility and violence in Sri Lanka related to the 30-year civil war between the governing ethnic Sinhalese, who are Buddhist, and the minority ethnic Tamils, who are Hindu. This was actually the first generational crisis war to reach a climax in this century. This civil war climaxed in May 2009. As in the case of all generational crisis wars, especially when they are civil wars, the war was extremely brutal and bloody with atrocities committed on both sides. Mahinda Rajapaksa was president during the last years of that war, and he has been personally charged with war crimes.

There have been sporadic surges in violence since then. Since 2014, there have been numerous hate crime attacks by Buddhists on Muslims, including arson at Muslim-owned businesses and petrol-bomb attacks on mosques. The attacks are being blamed on a radical nationalist Buddhist organization, Bodu Bala Sena (BBS – Forces of Buddhist Power).

Another important legacy of Rajapaksa’s presidency is that he made Sri Lanka the poster child and the first country to become victim to China’s “Debt Trap Diplomacy.” The Seaport of Hambantota, a Chinese infrastructure project in Sri Lanka, was funded with a loan from China, with almost all the labor performed by Chinese workers and all parts and services imported from China, so that the loan money never benefited Sri Lanka’s industries. Rajapaksa agreed to China’s demands for exorbitant loan repayment terms. Sri Lanka was unable to repay the loan and, in December of last year, Sri Lanka was forced to give the seaport away to China. So now Sri Lanka has a large seaport owned by China and a large Chinese enclave with hundreds of Chinese families, with no benefit to itself and to its own people.

What is more important is that the seaport is at a strategic location in the Indian Ocean, and is one of China’s “String of Pearls” seaports, and is considered a major security threat to India. Rajapaksa’s return to power means that China will play a dominant role in Sri Lanka’s politics and development. India Today and Foreign Policy and Diplomat