The video shows the police chief was bound, blindfolded, forced to kneel, murdered by Taliban gunmen, and left lying in the sand.

Strong graphics!
Haji Mullah, Police chief of Badghis province executed after surrender by #Taliban.
This is their public amnesty!
pic.twitter.com/RsyslvJw98

The video was initially “shared through a Taliban-related network” and then posted on Twitter by Nasser Waziri, a security adviser to the fallen Afghan government and former BBC journalist, Australia’s News.com reported. The authenticity of the video has not been independently confirmed.

“He was surrounded by the Taliban and had no choice but to surrender last night. The Taliban targeted Achakzai because he was a high-ranking intelligence official,” Waziri said.

“Gen. Achakzai, in his early 60s, was an avowed enemy of the Taliban and known as a seasoned fighter in the long-running conflict between the group and the forces of the Afghan civil government, which fell at the weekend,” the UK Daily Mail reported Thursday.

The late police chief executed by the Taliban.
Taliban forces continue to hunt down former security forces members that did not desert#Afghanistan #Badghis #Taliban pic.twitter.com/3eBmpbQs9m

“According to reports, the governor and police chief of Laghman Province near Jalalabad in eastern Afghanistan have also been detained, with their fate to be decided by the Taliban high command,” the Daily Mail added.

Badghis province includes the city of Herat, the third-largest city in Afghanistan. The Taliban captured the city without a fight last Thursday. Some government forces retreated, while others surrendered to the Taliban and pleaded for amnesty.

The Taliban told foreign media it would grant amnesty to all former employees of the deposed government, but the militants are reportedly using captured government data to hunt down, kidnap, and execute officials like Achakzai who opposed them.

The New York Times (NYT) on Thursday quoted former Afghan officials who said the Taliban is “combing through records at the ministry of defense and interior and the headquarters of Afghanistan’s spy service” and “drawing up lists of operatives to search for.”

“The Taliban began showing up at the houses of senior intelligence officials soon after moving into Kabul on Sunday. At the home of Rahmatullah Nabil, a former NDS [National Directorate of Security] chief who left the country in recent days, the Taliban came with electronic equipment to sweep the house,” said one of the NYT’s sources.

NEW: Hunted by the Taliban, Afghan soldiers and spies who didn't surrender are now on the run and hiding, desperate for an American rescue that will most likely never materialize. https://t.co/igc3VmY01x

“A senior member of the security forces of the ousted administration sent a message to journalists saying that the Taliban had obtained secret national security documents and Taliban were arresting former intelligence and security staff,” Reuters reported Thursday.

Waziri believes he is also on the Taliban death list. He has established an online private chat forum with secure VPN access for roughly a hundred former officials hunted by the Taliban, including governors, police officers, and advisers.

Waziri said a former district governor hiding in Kabul told him the Taliban dragged his family out of their house and beat them to obtain information on his whereabouts. Threats to family members are reportedly a standard part of the Taliban’s “door-to-door investigations.” 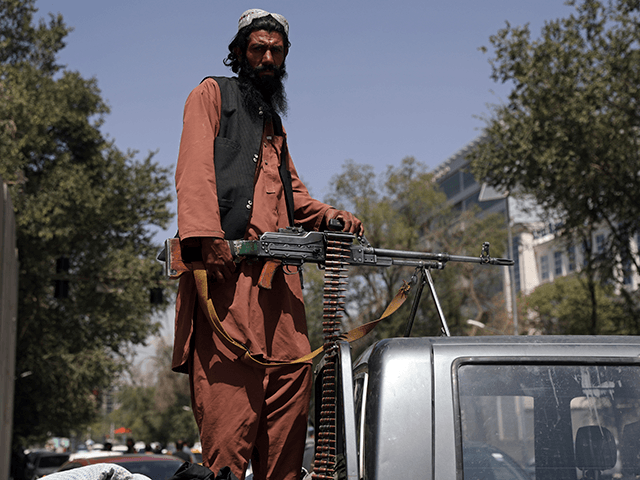 A Taliban fighter sits on the back of vehicle with a machine gun in front of the main gate leading to the Afghan presidential palace, in Kabul, Afghanistan, Monday, Aug. 16, 2021. The U.S. military has taken over Afghanistan’s airspace as it struggles to manage a chaotic evacuation after the Taliban rolled into the capital. (AP Photo/Rahmat Gul)

A confidential United Nations security report leaked on Thursday, which reportedly stated Taliban fighters are intensifying their search for former government employees and those who “collaborated” with the United States and other NATO forces.

The U.N. report confirmed Waziri’s claim that Taliban thugs are “arresting and/or threatening to kill or arrest family members of target individuals unless they surrender themselves to the Taliban.”

The report included a copy of a letter sent on Monday by the Taliban to a former Afghan counterterrorism official, threatening that his family would be “treated based on Sharia law” if he did not surrender himself.