China’s state-run Global Times on Wednesday boasted that China’s “energy independence capacity” is at a record high of over 80 percent thanks to the Chinese Communist Party “beefing up energy security” by burning mountains of heavily polluting coal. Some of that coal is coming from North Korea, in defiance of U.N. sanctions.

The Global Times piece was a reprise of the usual song-and-dance China uses on climate change activists, who are apparently willing to fall for the act indefinitely, even as China burns enough coal to fill the Christmas stockings of every naughty child on Earth a thousand times over.

The gist of China’s grift is that everyone should stop criticizing it for polluting like mad today because, as an iron-fisted authoritarian regime, it can simply order its economy to begin reducing carbon emissions in 2030 and eliminate them entirely by 2060. The climate change movement largely pretends to believe this – with a few grumbles over the past year or so – even though China is steadily increasing its use of coal, and its future demand, by building more coal-fired plants. 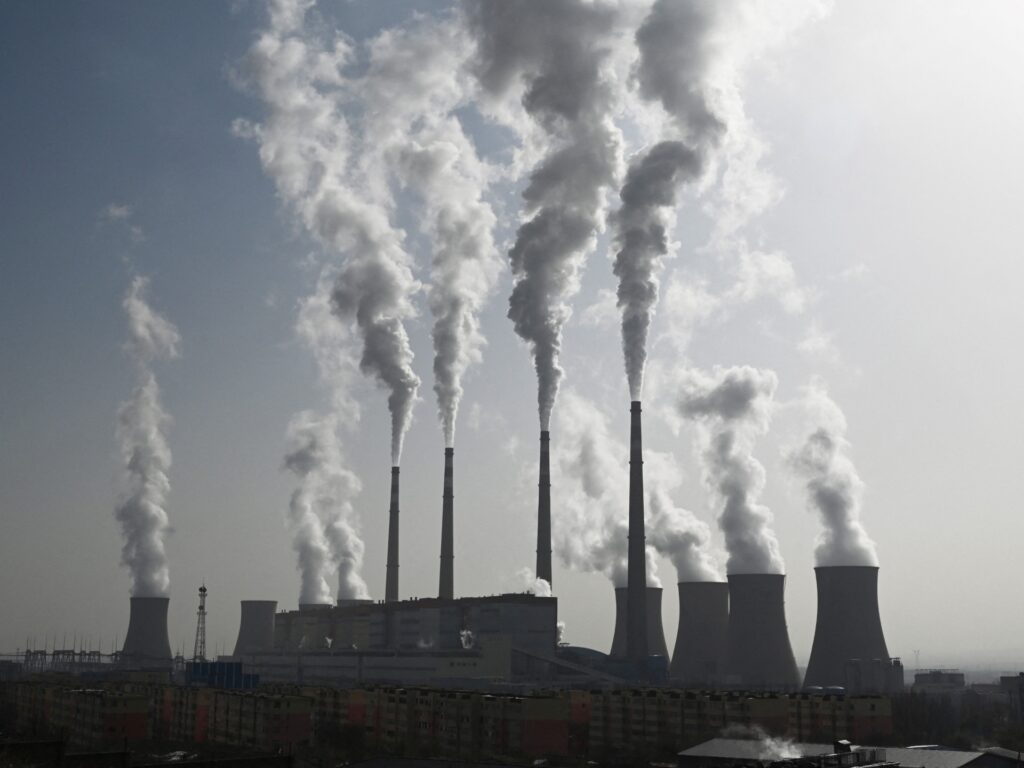 This photo taken on November 15, 2021, shows the coal-powered Datang International Zhangjiakou Power Station in Zhangjiakou, one of the host cities for the 2022 Winter Olympic Games, in China’s northern Hebei province. (Photo by GREG BAKER/AFP via Getty Images)

The Global Times quoted Chinese officials who bragged that China now “leads the world” in electric power generation for its ravenous industries, with “no large-scale power outages” — possibly a jab at the Europeans, who are seriously concerned about power outages that would be even more dangerous in the coming winter.

“While global shortages of natural gas, oil, electricity and other energy sources have caused unprecedented challenges to power supplies and the continuous fluctuation of energy prices at high levels, China’s energy production and supply have been able to maintain a relatively stable and positive trend as the government has churned out policies to ensure a stable energy supply chain,” the Global Times simpered.

This “energy independence” was unabashedly achieved with coal. The Global Times glowingly quoted Chinese officials who guaranteed China’s voracious appetite for coal would be fed with a guaranteed supply through 2023, “in a bid to fully unleashed advanced production capacity,” and long-term deals for even more coal have been signed with foreign suppliers.

To that end, Radio Free Asia (RFA) reported on Wednesday that North Korea has resumed shipments of coal to “energy-starved China” in defiance of U.N. Security Council Resolution 2371, a prohibition against buying North Korean coal that was adopted in 2017.

“It is common for the coal to be transferred from the North Korean trading company’s ships to Chinese ships on the open sea,” the official said, describing a tactic common among sanctions-busting smugglers.

RFA pointed to its own reporting that illegal North Korean coal shipments to China began ramping up in late 2021 as “China struggled with severe coal shortages that led to rolling blackouts in many parts of the country.”

The smuggling appears poised to reach new levels now that North Korea’s coronavirus situation is supposedly stabilizing. Chinese agents might have been nervous about close contact with North Korean personnel and facilities while the Chinese coronavirus was raging, but according to RFA’s North Korean source, China has become so eager to grab more coal that its buyers are skipping the usual ship-to-ship-transfer subterfuge and sailing cargo ships right into Nampo.

“Foreign currency earned from coal exports is not deposited into the Foreign Trade Bank of the DPRK but is collected directly by the party,” the source noted.

A second North Korean official confirmed that “powerful trading companies are earning foreign currency by exporting hundreds of thousands of tons of coal at a time by borrowing large ships from China.”

“Military companies are using the foreign currency they earn from coal exports to secure fuel for Border Guard patrol boats and warships and food for military personnel,” the second official said.