FERGUSON, Missouri–It’s not easy running a business with riots going on. In the ten days since Michael Brown was shot in Ferguson, Missouri, the small businesses that line the streets have suffered a major financial blow from the constant rioting, vandalism, and looting, owners said.

Looters and vandals have smashed windows of store fronts, spray painted graffiti, stolen property, and burned down businesses. Some stores re-opened with plywood plugging up their smashed windows. The words “open for business” are often spray painted on the plywood, but many customers are too afraid to even come. 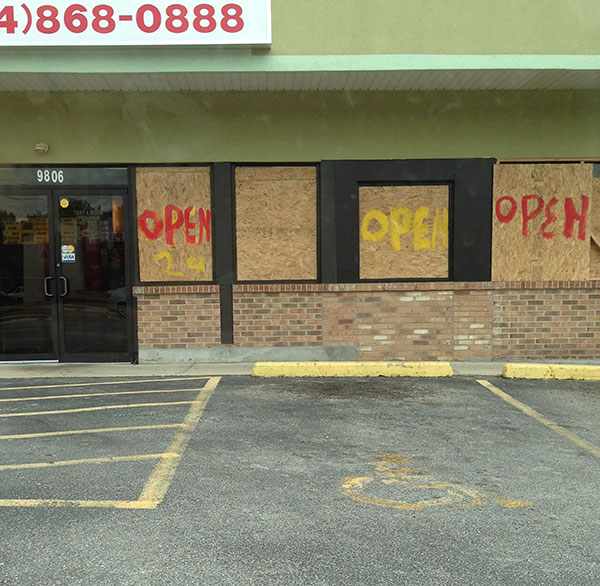 One such sign for “Yolo! Botique” says in spray-painted letters the store is “OPEN!” and instructs would-be looters the facility is “BLACK OWNED.”

“The first time [my store was hit] it was Saturday, early morning. I had shop lifters. You just don’t know what to expect. Is there going to be another one? Is there going to be another break in?” Sonny Dayan, a small business who owns a shop in a small strip mall on West Florrissant Avenue in Fersguson, MO, told Breitbart News on Tuesday. Dayan’s cell phone store, like others around it, is boarded up with hand-made signs telling the public they are still open. 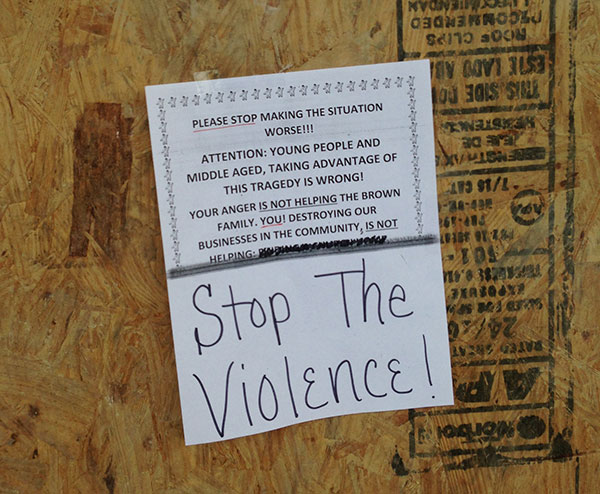 “Our patients are canceling left and right because they don’t want to come on our street,” the owner of a medical facility told Breitbart News. “It’s affecting our bottom line for the past week. We’re going on the 8th day now.”

The same business owner was concerned about releasing her businesses name for fear of retribution by protesters who may burn down the facility like she says they had already done to a friend’s place of business. Additionally, the shop owners are concerned the damages done may not be covered by their insurance.

The medical facility owner agreed saying, “Several of these businesses and we checked ours -there’s a cause in it that says there’s no coverage for anything pertaining to a riot act. So any of the damage is coming out of the [business owner].”

She added, “So It’s not enough that we’ve suffered for nine days and lost about 70 percent of the business and can’t pay our rent and can’t get anybody here to help us. So what else can we observe here as small business owners?”