Clifton says for the past six years since 2008, employer business startups have fallen below the business failure rate, spurring what he calls “an underground earthquake” that only stands to worsen as lagging U.S. Census data becomes available.

“Let’s get one thing clear: This economy is never truly coming back unless we reverse the birth and death trends of American businesses,” writes Clifton. 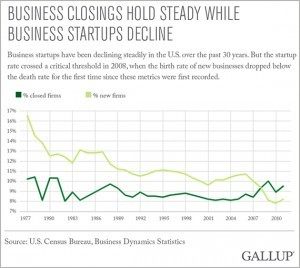 Indeed, the numbers are striking. Contrary to the oft-cited 26 million businesses in America figure, Clifton says 20 million of these so-called “businesses” are merely companies on paper with zero workers, profits, customers, or sales. In reality, America has just 6 million businesses with one or more employers–3.8 million of which have four or fewer employees. In total, these 6 million U.S. companies provide jobs for more than 100 million people in America.

Of the 2.2 million job-creating companies with five or more workers, the numbers break down accordingly:

The Gallup CEO says the numbers paint an ominous portrait of America in a dire state of decline.

“I don’t want to sound like a doomsayer, but when small and medium-sized businesses are dying faster than they’re being born, so is free enterprise,” says Clifton. “And when free enterprise dies, America dies with it.”