UPDATE, 8:00 PM: A candlelight vigil is being held for the slain officers.

CORRECTION: Candlelit vigil from 8 to 10 tonight at HPD Substation near Petro out west for officers Deen & Tate. #WDAM

Hattiesburg Citizens beware: HPD is not calling asking for donations and account numbers, plans will be announced tomorrow for people. #WDAM

UPDATE, 9:53 AM:  The Associated Press has issued an initial report.

HATTIESBURG, Miss. (AP) — Two Mississippi police officers — one a rookie — were shot to death during an evening traffic turned violent, a state law enforcement spokesman said Sunday. Three suspects were in custody, including two who are charged with capital murder.

The deaths of the officers are the first to hit the southern Mississippi city of Hattiesburg in three decades — and come amid a national debate on policing, race and the use of deadly force, following the recent killings of unarmed black men by police in Missouri, South Carolina and elsewhere.

The officers’ deaths also follow by a day the funeral of a New York City officer who was shot in the head while stopping a man suspected of carrying a handgun. 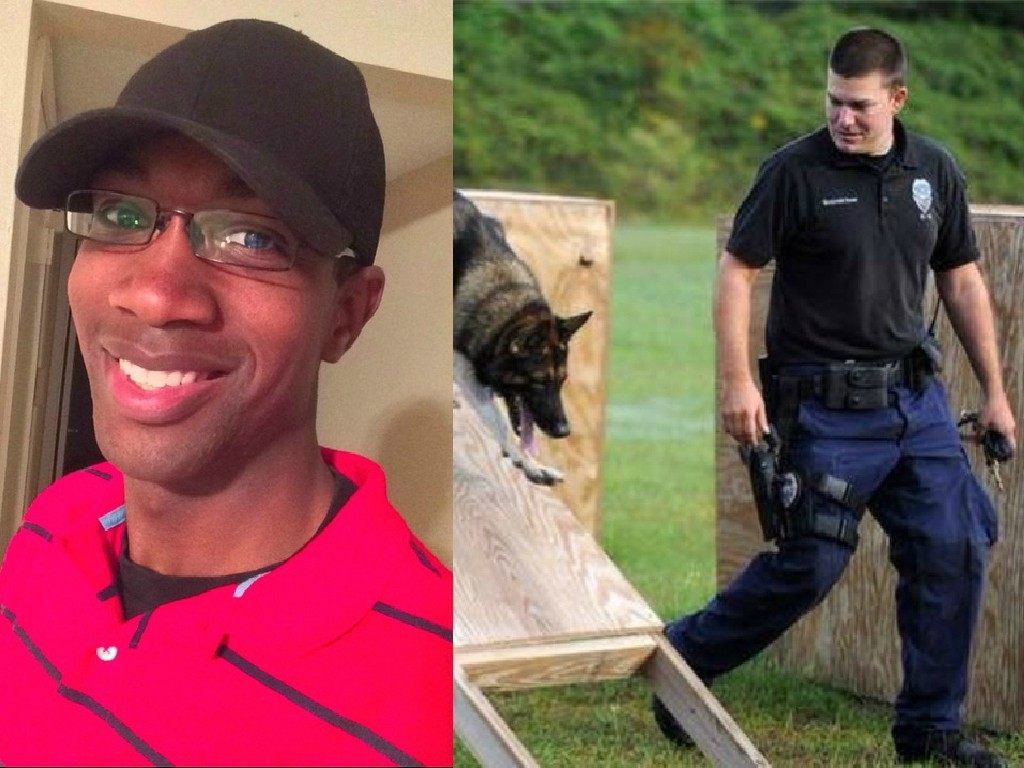 Warren Strain, a spokesman for the Mississippi Department of Public Safety, told The Associated Press that 29-year-old Marvin Banks and 22-year-old Joanie Calloway were each charged with two counts of capital murder.

Banks was also charged with one count of being a felon in possession of a firearm and with grand theft for fleeing in the police cruiser after the shooting, Strain said.

“He absconded with a Hattiesburg police cruiser. He didn’t get very far, three or four blocks and then he ditched that vehicle,” Strain said.

Banks’ 26-year-old brother, Curtis Banks, was charged with two counts of accessory after the fact of capital murder. 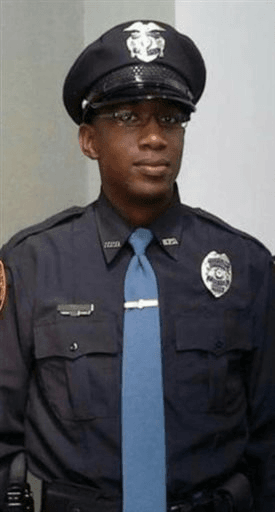 “All three subjects were taken into custody without incident,” Strain said, adding they were expected to face initial court appearances Monday. Because authorities said the three were being held at undisclosed jails in the state, they could not be reached for comment. It was not immediately known if they had acquired lawyers.

Strain said the three suspects were traveling in a Hyundai vehicle when it was stopped and that shots were fired by “one individual” from the vehicle.

He declined Sunday morning to say how many shots were fired or who had fired them. He also said any information about the officers’ actions or what prompted the stop “would be premature to talk about” only hours into the investigation.

The official said Marvin Banks was found at a hotel in the area after Calloway was arrested at a convenience store. He added that Curtis Banks was taken into custody at a Hattiesburg apartment. 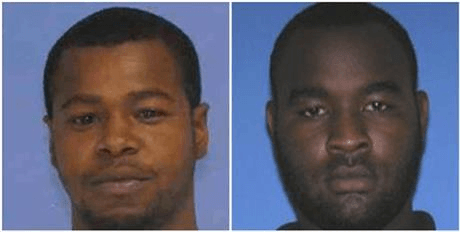 “At this point a weapon has not been recovered. However, warrants have been issued to search several properties in the Hattiesburg area. We are hopeful and believe that the murder weapon will be recovered,” Strain added. “At this point, it appears to have been only one weapon.”

Strain said both officers died of their wounds at a hospital.

Lt. Jon Traxler, a Hattiesburg Police Department spokesman, identified the officers who died as 34-year-old Benjamin Deen and 25-year-old Liquori Tate. Local reports identified Deen as a past department “Officer of the Year,” and Tate was a newcomer to the force who Strain said was a 2014 graduate of the law enforcement academy.

“All I know right now is that there was a traffic stop and someone started shooting at them and both of the officers were struck,” Traxler said.

The officers bodies were taken to a medical examiner’s office in Jackson with autopsies pending, Strain said.

After the shooting, law enforcement agents swarmed the area. Many emergency vehicles, their lights flashing, could be seen and police initial asked nearby residents to shelter indoors while they sought suspects.

The state’s chief law enforcement agency, the Mississippi Bureau of Investigation, has taken up the investigation, according to Strain.

The newspaper reported these are the first Hattiesburg officers to die in the line of duty in 30 years.

Hattiesburg resident Tamika Mills was quoted by The Clarion-Ledger as saying some bystanders came upon the officers on the ground, and that one of the officers asked “… ‘Am I dying? I know I’m dying. Just hand me my walkie-talkie,'” Mills told the paper.

She added, according to the account, that seeing the officers down was “shocking and heartbreaking.”

UPDATE, 8:00 AM:  Both suspects are convicted felons. Another female suspect has also been taken into custody.

A female was also taken into custody that was also in the vehicle at the time of the shooting. #WDAM pic.twitter.com/5JHSIyb763 — Ryan Moore (@RyanMooreMS) May 10, 2015

Brothers Curtis and Marvin Banks both have previous felony convictions in the City of Hattiesburg. #WDAM pic.twitter.com/CCmE35C9kt

When asked if he (Curtis) shot the officers he scream “no man”. #WDAM pic.twitter.com/zqMtH6sKJS — Ryan Moore (@RyanMooreMS) May 10, 2015

HPD officer Liquori Tate (pictured top far right) graduated from the police academy June 2014, not even a year ago. pic.twitter.com/ZWvNLkIAfi

Marvin Banks has been arrested and brought to @MHPTroopJ by Lamar County Deputies. #WDAM pic.twitter.com/MTiGkfrXCH

UPDATE, 2:39 AM:  One suspect has allegedly been apprehended.

UPDATE, 2:39 AM:  One suspect has allegedly been apprehended.

Marvin Banks has been arrested and brought to @MHPTroopJ by Lamar County Deputies. #WDAM pic.twitter.com/MTiGkfrXCH

Numerous roadblocks set up around the Hub City and plenty of other agencies in to assist. #WDAM

HPD officer Deen was a great friend, and a great officer. Deen training with his K9 Tomi. pic.twitter.com/kD6N191rgt

Forrest County Cororner says both officers are being sent to Jackson for an autopsy. #WDAM

UPDATE, 1:20 AM: Both photos of the alleged crime scene and the suspects have become available, according to a reporter on the scene.

One of the officers vehicles killed in the line of duty still wit lights flashing at the scene. #WDAM pic.twitter.com/m9n155jpHG

Another view of the scene #WDAM pic.twitter.com/XIYWM2Al4p

A crime scene tech surveys the scene where 2 Hattiesburg police officers were shot. Both officers have died. #WDAM pic.twitter.com/FT51aT3uOX

Both have a prior record as offenders in the City of Hattiesburg. pic.twitter.com/6wBUs2Ecpm

Marvin and Curtis both are Hattiesburg residents that have addresses near the scene of the shooting.

UPDATE, 1:00 AM: Hattiesburg Mayor Johnny DuPree urges residents to stay inside, issuing a statement of strong support for the police killed in the line of duty, according to The Clarion-Ledger:

Law enforcement authorities are looking for Curtis and Marvin Banks as suspects. Both men are Hattiesburg residents.

Hattiesburg Mayor Johnny DuPree said is asking residents to remain at home and inside while authorities search for the suspect.

Multiple law enforcement agencies swarmed to the scene between Gordon Street and East Fourth Street, crisscrossing throughout the fringes of downtown.

Hattiesburg residents Tamika Mills and Pearnell Roberts discovered the two officers who had been shot. The pair got out to check on the officers and called 9-1-1.

“Never in my life have I experienced or seen anything like this expect on TV and to be in the midst of it, it’s shocking and heartbreaking,” Mills said. “As we were coming down Fourth Street, we noticed a bunch of lights. As we came on through, (Roberts) told me to turn around because she saw somebody laying on the ground.

“So I backed up. That’s when we noticed the officer was down. We just saw that one, but in the course of me being on the phone with 9-1-1, I turned and I saw another officer across the street rolling on the ground. (Roberts) ran across the street to check on him. He wasn’t all the way alert but he asked her, ‘Am I dying? I know I’m dying. Just hand me my walkie-talkie.'”

UPDATE, 12:36 AM: The Meridian Police Department confirms that police are searching for two suspects: Curtis and Marvin Banks. From NewsCenter 11:

Newscenter 11 has confirmed through the Meridian Police Dept. that both officers involved in a shooting in Hattiesburg around 9pm have died.

UPDATE, 12:30 AM: Police are reportedly searching for a suspect named Curtis Banks.

On Saturday night, two Hattiesburg, Mississippi, police officers were shot and killed. Law enforcement officials believe the suspect may have stolen a police car afterward, then abandoned it.

The names of the officers have not been released.

According to WWLTV, the officers were shot in downtown Hattiesburg “near East Fourth and Bouie streets around 8 p.m.” Their deaths mark “the first slaying of a Hattiesburg officer since Jackie Dole Sherrill was killed on New Year’s Eve in 1984.”

Numerous law enforcement personnel are still on the seen,while others are searching for the suspect.

They found a police car abandoned on Gordon Street. They believe this car was stolen by the suspect.