In June, 55,000 people voted in the Breitbart Primary, and they preferred Sen. Ted Cruz (R-TX) and Wisconsin Governor Scott Walker to win the GOP’s 2016 presidential nomination.

The complete national results for June’s Breitbart Primary are below, and results from Iowa, New Hampshire, and South Carolina follow. 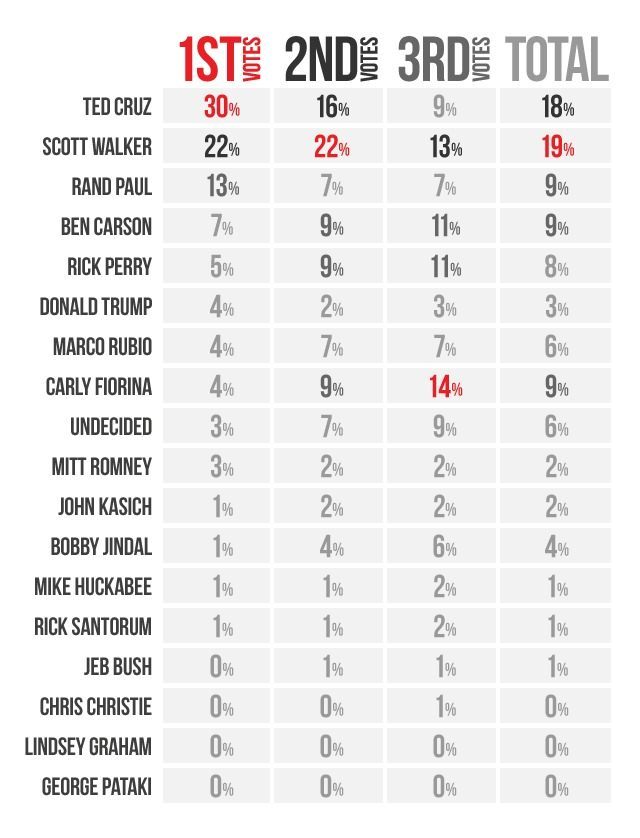 Since upsetting establishment Republican David Dewhurst in Texas’s Senate primary in 2014, Cruz has aggressively taken on the GOP establishment along with the D.C.’s bipartisan political class. Emphasizing his “bold” brand of conservatism against the “pale pastels” approach favored by establishment Republicans, Cruz has been a thorn in the side of the permanent political class by trying to defund Obamacare and President Barack Obama’s executive amnesty for illegal immigrants.

Walker, by taking on Wisconsin’s government unions and prevailing in a recall election, showed that conservative policy solutions can translate to electoral success. Though he is expected to announce his candidacy in July, Walker has already shaped the debate when he said that the next president must make “decisions about a legal immigration system that’s based on, first and foremost, on protecting American workers and American wages.” Sen. Jeff Sessions (R-AL) has praised Walker for his comments and said that his pro-American worker stance on immigration would be “helpful for the republic.”

The Wisconsin governor, though his political organization has been criticized for hiring operatives who have tried to undermine conservatives in the past, has been touted as a candidate who can unite the grassroots and the establishment wings of the party to successfully take on Hillary Clinton in the general election.

Among Breitbart Primary voters in Iowa, Cruz leads with 36% to Walker’s 20%, but Walker actually received more votes when second- and third-choice votes were considered. Paul came in fourth with 10% while Fiorina was fourth with 8%. Though Perry was the first choice of 6% of Iowans who voted in the Breitbart Primary, he received more total votes (10%) than Paul or Carson.

Iowa’s results for June’s Breitbart Primary are below:

In New Hampshire, Cruz edges Walker by three points (32%-29%) while Paul is a distant third at 15%. Though Donald Trump placed second, three points behind Jeb Bush, in a recent CNN/WMUR New Hampshire poll, Trump finished with 4% support in the Breitbart Primary, tied with Carson and behind Fiorina (6%). Though New Hampshire may be a “must-win” state for Bush and Christie, both candidates received 0% total support in the state.

New Hampshire’s results are below:

South Carolina’s results are below:

Because the GOP field will winnow and likely leave four or five candidates standing, the second-place preferences of Breitbart Primary voters may reveal which candidates may benefit the most if certain candidates drop out of the race.

Thirteen percent of Paul’s supporters are undecided about their second choice and 32% are undecided about their second- or third-choice options, which means Paul’s supporters may stay at home if the libertarian-leaning candidate, who has polled the best against Hillary Clinton in hypothetical general election match-ups, is not on the ballot in the general election.

Walker’s supporters seem to be satisfied with alternative options, as he had the lowest number of undecideds when it came to second- and third-choice votes. Thirty percent of Walker’s supporters would back Cruz if Walker drops out while Perry, Rubio, and Fiorina each received more than 10% support. Walker’s voters were also 50% less likely to vote for Paul than the general population.

Cruz’s first-place supporters will not vote for Jeb Bush as their second (0%) or even third choice (0%) under any circumstances. Thirty-nine percent of Cruz’s supporters would back Walker, though, if Cruz drops out, followed by Paul (13%) and Perry (12%).

If Rubio drops out of the race, Walker would by far be the greatest beneficiary, as the Wisconsin governor is the second choice of 40% of Rubio’s supporters, followed by Fiorina (12%) and Cruz (11%). Rubio’s voters do not like Paul, as they are four times less likely to vote for the Kentucky Senator than the general population. Rubio’s supporters are also the most likely to vote for Bush as their second choice. But in a sign that their supporters may actually not overlap that much, that number is only 3%.

If Perry, who may be running in part to rehabilitate his image from his disastrous 2012 bid for the White House, does not gain traction and drops out of the race, 33% of his supporters would back Walker, followed by Cruz (23%) and Fiorina (12%).