A new report released by the libertarian Cato Institute finds that among the eight governors who are GOP candidates for president, only Gov. Bobby Jindal of Louisiana has cut spending in his state.

In introducing her report, Nicole Kaeding writes, “A governor who promises to cut federal spending is more believable if he held spending in check when he was governor.”

Using data from the National Association of State Budget Officers, Kaeding looked at how much each governor/presidential candidate increased spending on an annual basis in his state. 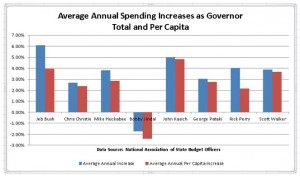 “Analyzing the data on an annual basis allows us to control for the length of governor tenure,” she notes.

Additionally, by examining annual average spending growth on a per capita basis – which allows for less biased comparison since the population of each state grows at different rates – Kaeding observes, for example, that the spending hike of Gov. Jeb Bush in Florida is above average while that of Gov. Rick Perry of Texas falls below the average increase.

Using a letter grading system – Cato’s Fiscal Policy Report Cards – to describe the spending practices of the 2016 candidates who are or were once governors, Kaeding writes, “Bobby Jindal actually cut spending on a per capita basis by an average of 2.31% a year.”

Cato credits Jindal with reducing spending by cutting the state’s workforce by 26 percent since he has been governor, and through both significant pension reforms and cuts to higher education spending.

Still, Kaeding writes, “Louisiana general fund spending has fallen during Bobby Jindal’s tenure as governor. At a time when states were increasing spending, Jindal instituted reforms that cut the state workforce and lowered per capita spending. This feat makes Jindal unique among Republican contenders for the presidency.”

Bush, according to Cato, was “a prolific tax cutter,” but allowed spending to run away quickly during his second term.

“Like George W. Bush, Jeb was good on taxes, but apparently not so good on spending,” writes Kaeding.

The Cato report refers to Gov. John Kasich of Ohio as “an outlier,” since he increased spending faster on a per capita basis, which gives credence to the charge that he lacks fiscal restraint.

John Kasich of Ohio received a “B” in his first report card. In 2014 his grade fell to a “D,” and that tied him as the worst Republican governor on fiscal policy in the country. Kasich supported huge spending hikes. Spending increased 18 percent from 2012 to 2015, according to the National Association of State Budget Officers, and he expanded Medicaid over objections from the legislature. He requested another 11 percent increase for fiscal year 2016.

During the GOP debate last Thursday, Kasich defended his expansion of Medicaid by stating it has benefited mentally ill prison inmates.

“I’d rather get them their medication so they could lead a decent life,” he said. “Eighty percent of the people in our prisons have addictions or problems. We now treat them in the prisons, release them in the community and the recidivism rate is 10 percent.”

While Perry achieved a grade of “B” on five of six of his Cato “report cards,” spending grew under his tenure, though Kaeding acknowledges a significant amount of that was due to population growth and inflation.

“During his long tenure, Perry showed reasonable fiscal restraint,” she observes. “Perry did not shrink the size of Texas’ government, but he limited its growth both in terms of spending and tax revenue.”

Former Gov. George Pataki of New York, Kaeding writes, eventually dropped to a “D” on his report card due to his support for large spending and tax increases.

“Spending grew at twice the rate of population growth and inflation during his tenure,” she states. “He backed several tax hikes and NY issued billions in new debt.”

Former Arkansas Gov. Mike Huckabee fell from a “B” to an “F” grade due to his doubling of state spending and new tax increases totaling $500 million.

Though Huckabee began his tenure with a $70 million package of income tax cuts and a big cut to his state’s capital gains tax, he “changed direction,” notes Kaeding, and used the Arkansas tobacco settlement funds to expand Medicaid. A large bond effort to allow for higher spending for infrastructure also came at great cost to the state.

By the end of Huckabee’s tenure, Cato notes that general fund spending in his state had increased by 54 percent, and total state spending had risen by 94 percent.

While Gov. Scott Walker of Wisconsin enacted a hefty tax cut and labor union reforms, spending grew in his state under his tenure faster than the national average, Kaeding notes.

Walker earned a grade of “B” on Cato’s report cards in 2012 and 2014, but the governor still has continued to support higher spending. She writes:

Wisconsin’s total income tax rate of 7.65 percent is still one of the highest in the country, and its Business Tax Climate is a discouraging 43rd in the nation, according to the Tax Foundation.

Walker has had success on labor and tax issues, but spending continues to grow rapidly in Wisconsin. From fiscal year 2012 to fiscal year 2015, Wisconsin state spending grew 15 percent. For comparison, state spending grew by 8 percent nationally during this period. So while Walker turned a $3.6 billion deficit when he took office into an $800 million surplus by June 2013, he has continued to spend excessively. His budget for fiscal years 2016 and 2017 included another $1 billion in increased spending.

Gov. Chris Christie of New Jersey, who has a Democrat-controlled legislature, has regularly pushed for tax cuts and reductions in spending. He has earned grades of “B” on both his 2012 and 2014 “report card.”

Pushing against the Democrats in his state legislature, Christie has tried to lower taxes on New Jersey residents. In 2012, he proposed a 10 percent cut to personal income taxes. He also has signed into law some business tax cuts, including an energy tax cut in 2011, and has reformed the state’s pension system.

Nevertheless, Cato reports that the governor pressed to increase the state’s Earned Income Tax Credit from 20 percent to 30 percent. His support for economic development and some poor tax policies has contributed to the fact that New Jersey’s budget during his tenure grew 15 percent from 2011 to 2015.

“As the 2016 race heats up, the candidates will begin making many promises on tax and spending issues,” Kaeding writes, “but will we be able to believe them?”