“Rep. Ellmers is using taxpayer-funded mail to mislead the 2nd District yet again,” said economist Frank Roche, a conservative who is running against Ellmers in the GOP primary. “Her supporters in Congress, including [House] Speaker [John] Boehner, seem to be doing all they can to help Renée recover from the terrible decision to block the pain-capable abortion bill in January of 2015,” he told Breitbart News.

But in her flyer, Ellmers states, “This year, I will be on the congressional committee investigating the horrific revelations about Planned Parenthood harvesting fetal organs.”

As Breitbart News reported previously, Ellmers has been pushing to get a seat on the new panel, likely to repair her “pro-life” image after torpedoing the Pain-Capable bill in January on the eve of the March for Life event in Washington, D.C.

In January, one week before half a million activists from the Republican pro-life base descended upon the national mall for the march – and what they thought would be a celebration of the House passage of the Pain-Capable bill – Ellmers told the National Journal she was concerned about the political effects on Republicans if the vote on the bill moved forward.

“I have urged leadership to reconsider bringing it up next week…We got into trouble last year, and I think we need to be careful again; we need to be smart about how we’re moving forward,” Ellmers said. “The first vote we take, or the second vote, or the fifth vote, shouldn’t be on an issue where we know that millennials—social issues just aren’t as important [to them].”

Once the bill was pulled from the House floor, pro-life activists expressed their anger at Ellmers, who subsequently took to her blog and referred to them as “abhorrent” and “childish.”

“[I] am appalled by the abhorrent and childish behaviors from some of the leaders of the outside groups,” Ellmers wrote.

Ellmers ultimately voted for the Pain-Capable bill in May, but she had voted for the same bill – with the same rape reporting language in it – in 2013 as well.

Still, Ellmers claims a “100% Pro-Life voting record” in her flyer. That status was given to her by National Right to Life Committee, an organization whose president publicly took the position that adding a bill to defund Planned Parenthood to other must-pass legislation would be harmful to the pro-life cause. 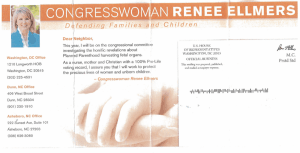 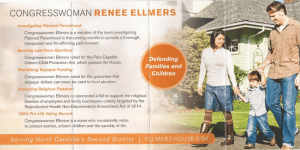 In September, prior to House Speaker John Boehner’s resignation, Carol Tobias, president of the National Right to Life Committee, said she had problems with conservatives who wanted to attach a bill to defund Planned Parenthood to a temporary spending bill.

“[I] think Planned Parenthood is a vile organization, and I resent the fact that they get any tax money,” Tobias told the New York Times.

“But realistically, with President Obama in the White House holding that veto pen, I don’t know that any government shutdown could accomplish what we want. What we have to do is get a new pro-life president in, and we’d have a much better chance of actually taking away their money.”

Earlier in September, however, some 60 other pro-life leaders signed a letter, sent to Boehner, House Majority Leader Rep. Kevin McCarthy (R-CA), and House Majority Whip Rep. Steve Scalise (R-LA), in which they urged the leaders to attach a bill to defund Planned Parenthood to must-pass legislation.

“We applaud efforts at the committee level to engage in the much needed investigations of Planned Parenthood’s abortion practices,” the pro-life leaders wrote. “Yet while federal and state investigations ensue, we urge you to act to withhold funding for PPFA and do so on a must-pass bill.”

“We will support such must-pass legislation if it contains a provision to defund Planned Parenthood,” the pro-life leaders added. “It is time for America to wash its hands of the blood money we offer to PPFA year after year.”

Distrust of Ellmers has not subsided among the pro-life base of the GOP.

“Ellmers and her surrogates in the district are uniquely focused on Renee’s position on life and abortion,” Roche explains.

“Just last night I was at a meeting with two of her surrogates and their major points were about her being on the Planned Parenthood panel via Energy and Commerce, and that she is the most pro-life Representative in the House,” he adds. “In fact one them held up his phone with a text from Renee about what she wanted him to say, emphasizing her position on the panel.”

In a statement sent to Breitbart News, the Susan B. Anthony List (SBA List) announced its opposition to Ellmers’ membership on the House select panel to investigate Planned Parenthood.

“There is no shortage of outspoken and determined pro-life members who would be well-suited to serve on a newly created select panel investigating Planned Parenthood,” SBA List said. “Congresswoman Ellmers should not be on the committee.”

“Congresswoman Ellmers is lobbying for a position on the panel and recently sent a taxpayer-funded mailer to her constituents touting her pro-life bona fides and her leadership on this issue,” the pro-life group observed. “The members of the committee are yet to be named.”

Rep. Ellmers comments earlier this year led to the Pain-Capable Unborn Child Protection Act being pulled from consideration on the eve of the March for Life just as hundreds of thousands of pro-life Americans – mainly youth – poured into the streets to protest abortion on-demand up until birth.

Congresswoman Ellmers unpredictable behavior would make her inappropriate choice for this important appointment.

Congresswoman Renee Ellmers and her team are certainly putting in the hours to try to make up for her complete betrayal of the pro-life movement when she stopped the bill that would have banned abortions after 20 weeks, which was supposed to be voted on during the March for Life earlier this year. First she blamed Millennials for not supporting the bill, which was blatantly false, then she said blamed certain language in the bill -which made no sense at all since she voted for an identical bill the year before.

Now she’s on the fast track to make it up to her constituents by sending a taxpayer-funded flyer saying that, indeed, she voted for that very same bill that she shot into oblivion for no particular reason. It took months to get another vote. She is unpredictable and reckless when it comes to standing for the most vulnerable among us.

And now Rep. Ellmers would like to be on the select panel to investigate Planned Parenthood. Indeed, in the flyer, she implies that she’s already on a special committee to investigate the abortion giant when she is merely a member of one of the three committees that is doing an investigation. There are solid pro-life Members of Congress who deserve a spot on this select panel and Rep. Ellmers is not one of them.

Ellmers’ office did not immediately respond to Breitbart News’ request for clarification of her committee assignment as mentioned in her flyer.