Public support for the progressives’ goal of mandatory mixed-sex rest rooms is down by 20 points since mid-April as more Americans face the once-ludicrous prospect of being forced to share facilities with people of the opposite sex, according to a new Reuters poll.

Support for normal, single-sex, bathrooms shot up by one-third, or 12 points, from 35 percent up to 47 percent by April 19, according to the survey.

This 20-point public rebuke of the progressive agenda is occurring despite massive media cheerleading for progressives’ transgender priorities, including greater social status for a male athlete, Bruce Jenner, who now wishes to live as a woman named Caitlyn. The bigger goal of the bathroom push, however, would be to force American adults and youths to agree to share their public bathrooms and changing rooms with the small number of people who try to live and look like people of the opposite sex.

It’s likely that few Americans even notice the country’s few transsexuals as they use public bathrooms. That live-and-let-live compromise allows decent treatment of a pitied minority, while also keeping the legal tools to forcibly exclude transgenders in sensitive situations, such as the presence of children.

Since the Reuters poll was completed, hostile progressives have increased their effort to destroy the current live-and-let-live compromise.

For example, on April 19, a federal court said schools were required to have only mixed-sex bathrooms in Virginia, and could not have single-sex bathrooms. The decision would make it impossible for schools to have bathrooms just for boys or just for girls, and it would also be impossible for schools to comply with federal privacy laws, said a statement from the judge who opposed the decision.

On the same day, Target stores announced they would only allow mixed-sex changing rooms and toilets.

On April 21, numerous media outlets claimed that Donald Trump supported the progressive campaign to eliminate single-sex bathrooms. In fact, Trump favors the current live-and-let-live practice of ignoring quiet transgender people in bathrooms, and he said any future law requiring transgender-ready bathrooms would be discriminatory and also expensive for companies. “Leave [the law] the way it is,” he recommended.

Reuters seems to want to hide the dramatic shift in its news report announcing the poll.

For example, the report ignored the dramatic shift by focusing on the higher support for the mixed-sex bathrooms among young women, and lower support among older Americans. The misleading headline declared “Exclusive: Women, young more open on transgender issue in U.S. – Reuters/Ipsos poll.”

The Reuters report also averaged out the results from the week-long poll to completely obscure the shift in opinion. “Overall, the public is roughly split, with 43 percent saying they are closer to the view that people should use public restrooms “according to the biological sex on their birth certificate” compared to 41 percent who opt for “according to the gender with which they identify,” the report claimed.

On the final day of the poll, however, opposition had spiked to 46.4 percent, while support had dropped to 37.7 percent. 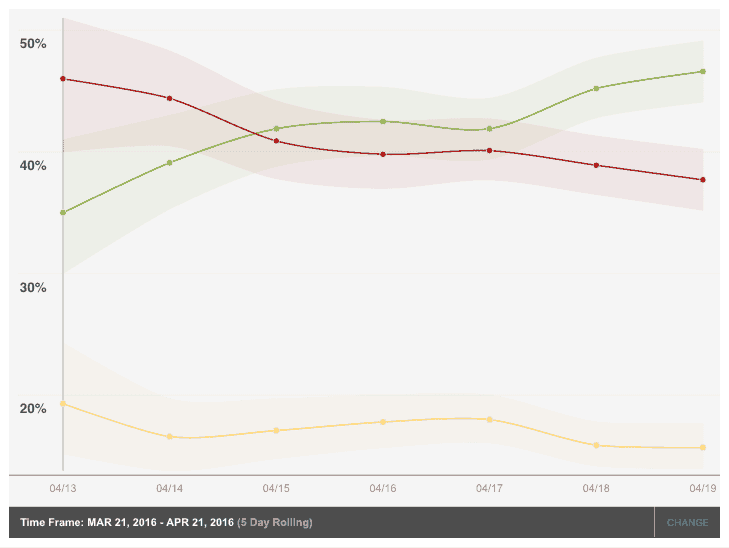 There are very few transgender people in the United States. A recent study of the 2010 census showed that only 89,667 adults had changed their names from one sex to another. That’s roughly 1 in 2,500 adults. Even the advocates of greater status for people who live like people of the opposite sex say that only one in every 400 American adults are transgender.

But, for progressives, the actual numbers of transgenders isn’t the issue. They’re using the “bathroom equality” campaign as part of their long political push to outlaw and stigmatize any practices and beliefs that recognize the routine differences in physical abilities and personal preferences between male and female Americans.

For example, contemptuous progressives are beginning to describe male or female bathrooms as “segregation,” which portrays Americans who prefer single-sex toilets as similar to racists. “One hundred and twenty-seven years ago, Massachusetts passed the first law mandating gender-segregated toilets, and many states quickly followed suit … meaning that much of the United States’ toilet-related building codes reflect a literally Victorian prudishness that we might mock in other contexts,” declared an April 2014 article in Slate.com.