The leader of Italy’s Northern League, Matteo Salvini, met with Donald Trump on Sunday evening in Pennsylvania, where they discussed the economy and Europe’s migrant crisis.

During the campaign rally in Wilkes-Barre, Salvini was holding a “Trump: Make America Great Again” poster and afterward had a 20-minute meeting with the Republican presidential front-runner.

As Salvini assured Trump of his support for victory next November 8, the New York magnate returned the campaign well-wishes, declaring, “Matteo, I hope you become Prime Minister soon.”

On the question of the immigration crisis, the two men reportedly were in “total agreement,” and discussed the need for policies targeting the populations of countries of origin to keep them from fleeing from hunger and poverty.

Last month Salvini said that he was a Trump supporter all the way. “His rigor, his strategy for economic recovery, his security policies, all make me root for Trump,” he said. 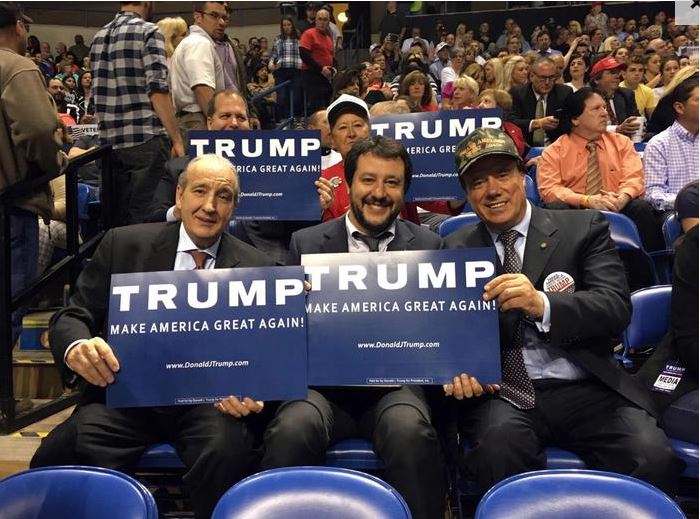 In just over two years, Italy’s Northern League party has experienced remarkable growth, thanks in large part to the mounting Italian migrant crisis. The League bounced back from an all-time low of just 4% in the 2013 elections to 16-17% support in recent polls.

Last February, Salvini teamed up with French National Front leader Marine Le Pen and other leaders of right-wing parties and Euro-skeptics at a convention organized in Milan by the Northern league.

At the meeting, Salvini stressed the need to “recover sovereignty and powers from the EU” and added that “if a left-wing government like that of Sweden has decided to repatriate immigrants, it means that Schengen is dead.”

The Northern League was founded as a separatist movement in the early 1990s, campaigning for independence for a northern Italian region it called “Padania.” Its outspoken founder Umberto Bossi pledged to liberate industrious northern workers from subsidizing what he called the lazy southerners down in the foot of the Italian peninsula.

No longer a separatist movement, the League now embraces conservatives throughout Italy and last May took 20 percent of the vote in Tuscany’s regional elections, a leftist stronghold and home to Italian Prime Minister Matteo Renzi.

“Tuscany is the proof that the days are over when we were labeled as a crazy far-right party,” said 42-year-old Salvini, who took over leadership of the Party in 2013, garnering 80 percent of party delegates’ votes.

Immigration isn’t the only area where Trump and Salvini see eye to eye.

When Italy’s highest court partially repealed a law in February that strictly regulated the construction of new mosques in the northern region of Lombardy, Salvini condemn the court’s ruling, calling it a victory for the left and for radical Islam.

Salvini said that by its decision the court was also abetting illegal immigration.

“This is an Islamic Court, not an Italian one,” said the League President. “It is an accomplice to illegal immigration.”

On Sunday, Salvini arrived to the Trump event together with Amato Berardi, the president of NIA-PAC (National Italian American Political Action Committee), an organization that seeks to promote Italian traditions, language and culture in the United States.

After his encounter with Trump, Salvini reportedly headed to Washington D.C. for a series of meetings.