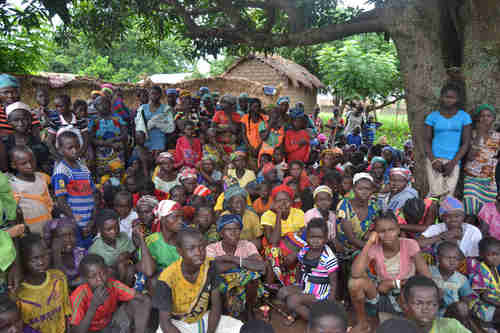 More than 6,000 people from the Central African Republic’s northwest Ouham-Pendé province, near the border with Cameroon, have fled into Cameroon and Chad to escape resurging violence between Muslim Seleka militias and Christian anti-balaka militias.

Last year, United Nations officials had hoped that a visit by the Pope in November, and the election of a new president, Faustin-Archange Touadéra, in December, would bring an end to the violence between Muslims and Christians in Central African Republic (CAR). Touadéra has been trying to reconcile Christians and Muslims. He was even seen celebrating the end of Ramadan with Muslims in the capital city Bangui.

The hope was that Christians whose villages were burned to the ground by Muslim militias, and Muslims whose families were raped, murdered and dismembered by Christian militias, will all put aside any desire for revenge, thanks to the soothing words of the Pope and the charismatic hope and change statements of the new president. Apparently, it didn’t work.

This year alone, some 25,000-30,000 people have been internally displaced, forced to flee from their homes. But the flood of refugees into neighboring countries began on June 12, when clashes erupted between Muslim livestock herders and Christian farmers north-west town of Ngaoundaye, in Ouham-Pendé province.

As I’ve explained in the past, CAR’s last generational crisis war was the 1928-1931 Kongo-Wara Rebellion (“War of the Hoe Handle”), which was a very long time ago, putting CAR today deep into a generational Crisis era, where a new crisis civil war has already started.

Many people had been hoping that the UN peacekeeping force, the Pope’s visit, the election of a new president would somehow combine to tranquilize the fighting and end the civil war. However, the Pope’s visit was to the capital city Bangui, the new president is sitting in Bangui, with little control over the rest of the country, and the peacekeeping force is just in Bangui, and has been only partially successful in keeping the peace there. Bangui is a tiny dot on the map of an enormous country that’s now completely lawless, with two militias in large populations seeking revenge.

From the point of view of Generational Dynamics, this is a generational crisis war, and it will not end until a lot of scores get settled with some kind of massive bloody, genocidal climax that will be remembered for decades. And CAR is nowhere close to that point yet. United Nations High Commissioner for Refugees (UNHCR) and Deutsche Welle and VOA

The huge civil war in Darfur, Sudan, was much in the news ten years ago. In 2007, just as President Bush was launching the “surge” that ended the violence in Iraq, Senator Joe Biden called for a complete withdrawal of all American troops from Iraq, and then use those troops to launch an invasion into Sudan to put an end to the Darfur war. “Let’s stop the bleeding,” Biden said. “I think it’s a moral imperative.” (From April 2007: “Senator Joe Biden wants to move troops from Iraq to Darfur civil war”)

In fact, the Darfur civil war has many things in common with the CAR civil war.

Low-level violence began in the 1970s between two ethnic groups, one of farmers (the “Africans”) and the other of camel herders (the “Arabs”), in the usual disputes over land and water. The violence increased from year to year, and in the 1990s, Sudan’s government in Khartoum delegated the responsibility of policing the region to the Arab Janjaweed militias, formed from certain groups of herders.

Violence continued to increase, and by 2003, it had turned into a full-scale generational crisis war. (A detailed history can be found in my 2007 article, “Ban Ki Moon blames Darfur genocide on global warming”) At that point, under direction of the new president Omar al-Bashir, the Janjaweed militias (herders) became extremely violent, with a program of massacres, mass murders, rapes, genocide and scorched earth.

Today, al-Bashir has renamed the Janjaweed militias as the Rapid Support Force (RSF), and they are still committing genocide in Darfur, although that violence isn’t in news much anymore, as it was in the days when Joe Biden took an interest in it. As in the case of CAR, the war will not end until a lot of scores get settled with some kind of massive bloody, genocidal climax that will be remembered for decades. Sudan Tribune and World Policy Institute (30-Mar

The European Commission has issued a draft proposal to provide €100 million in aid to the militaries of some African countries, who will be asked to use the money to prevent migration of refugees to Libya and then on to Europe.

As I like to point out, almost every day something new happens that a few years ago you would have to have been crazy to believe would ever happen. Whether it’s in America, Europe, Africa, the Mideast or Asia, things that could never happen are happening all the time.

A particular beneficiary of the EU’s aid program will be Sudan’s president Omar al-Bashir, and his government militia, the Rapid Support Force (RSF), led by a former leader of the Janjaweed militias general Mohamed Hamdan Hametti. Hametti will send around 1,000 RSF troops along the border with Libya. Both al-Bashir and Hametti are considered to be guilty of human rights crimes and genocidal violence against civilians in the Darfur civil war. EU Observer