Several thousand packed the Washington County Fair Park and Conference Center in West Bend, Wisconsin, a town about 20 minutes north of riot-scarred Milwaukee. Hundreds more were still lined up outside the building because fire codes prevented any more supporters from squeezing inside. 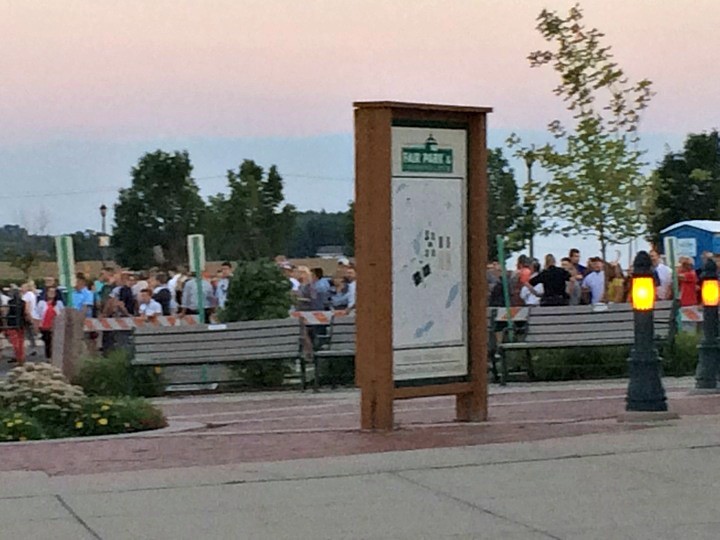 Many parents brought along their entire family, from infants to teens and every age in between. Those who came out to see the real estate mogul and Republican standard bearer were also from all walks of life, and their autos in the parking lot testified to their economic diversity. 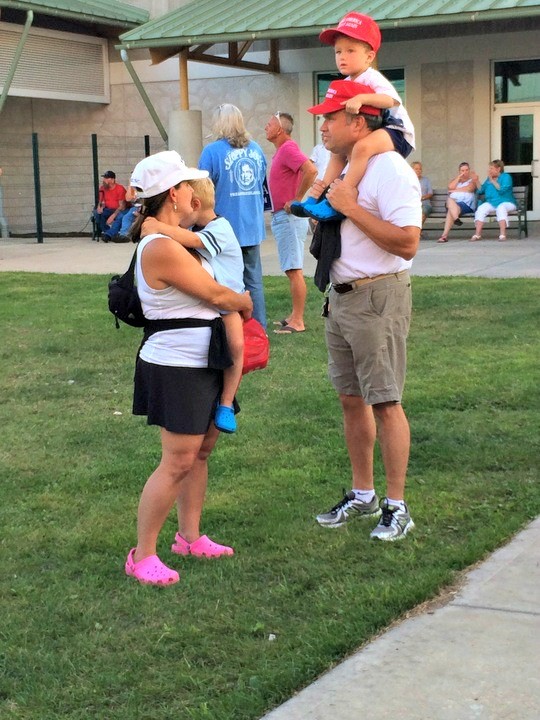 Rally goers were fired up, too. One woman engaged in a lively back and forth with the tiny number of #NeverTrump protesters parading outside the venue. As the two sides traded barbs, the Trump supporter’s final word was to scold them for supporting Hillary, “the biggest criminal to ever run for president,” she said.

Gov. Walker pounded home the message that Hillary Clinton was “unfit” to be president of the United States because all she can do is lie. It was a theme that Congressman Sean Duffy also hammered. And Rudy, clearly a crowd favorite, carried that theme even farther saying that the shared Obama and Hillary agenda has failed the country both economically and with national security.

Finally, after a two-hour wait, it was time for The Donald to come out on stage and when he did the crowd gave him a thunderous welcome.

Trump didn’t dilly dally around once the crowd quieted enough for him to begin, launching right into his important points with a steady gait that held the crowd in rapt attention.

Naturally he had a few sharp words for the media. As he told the crowd of believers how the media has sold out to Hillary, thousands of faces turned toward the middle of the room where the media was situated. It was amusing to see the ashen faces of the press as they sipped from bottles of “Trump Water” supplied to them by the campaign. The bottles carried a wrap-around label prominently featuring a large Trump portrait and his slogan, “Make America Great Again.”

Trade and unemployment were hot topics, but the GOP nominee had a major message to deliver in West Bend. His main message was to tell African Americans why they should be voting for him and not Hillary Clinton.

Presenting himself as the law and order candidate who would bring jobs, better education, and safety to the nation’s inner cities, Trump made a major play for the votes of African Americans. And it was a message the crowd loved hearing. With every new point the candidate made they roared all the more.

Trump laid the blame for the problems in the inner cities squarely at the feet of Democrats in general and Clinton in particular, especially where it concerned the growing animus for police.

“The problem in our poorest communities is not that there are too many police, it’s there are not enough police,” Trump said. The nominee then went on to scold Clinton for agreeing with “those peddling the narrative of cops as a racist force in our society.” These pushers of lies, Trump said, “share directly in the responsibility for the unrest in Milwaukee and many other places within our country.”

Trump ended his speech with a riff on Clinton’s slogan,’I’m with her.’

“I choose to recite a totally different pledge,” he said. “My pledge reads, ‘I’m with you, the American people… I’m with you, I will fight for you, and I will win for you.”

On the way out, Breitbart spoke to a family of five, a dad, mom, and three children all under the age of 10. The dad said he couldn’t imagine leaving to his children a country run by someone like Clinton. He worried that having such a crook in office would make a mockery of the rule of law so that by the time his children were adults the U.S. would be a “dog-eat-dog” world run only by those with the most power or the most nerve to just take what they wanted whether it was legal or not.

The man’s wife agreed and heaped abuse on a Republican Party that has sat back without lifting a finger to stop it all. This version of America seemed to be the one most at the rally wanted to prevent and the reason they support Trump.