In 2014 alone, a stunning 47,000 Americans died from drug overdoses, mostly from heroin and other opiates. This does not account for the damage caused by those who hurt or kill under the influence of drugs, the blood-borne diseases spread by sharing dirty needles, and the inherent violence involved in building a drug-trafficking enterprise.

Drug abuse and addiction problems are damaging many communities across the country, said Trump’s release, published Friday. “People managing debilitating chronic pain get hooked on powerful prescription drugs and even turn to heroin on the street when it becomes too difficult to obtain new prescriptions. It afflicts urban and rural, young and old.”

In campaign speeches around the country, Trump frequently talks of the devastation that the raging heroin epidemic wreaks on families and young Americans in particular.

Nearly all of the heroin used in the U.S. is brought across the border by Mexican traffickers, who are almost always illegal aliens. “The open border policies of Hillary Clinton, including catch and release, another terrible practice, have allowed a massive influx of drugs into New Hampshire, and frankly, to states all over our country. Almost every state. And it’s really fueled the tremendous drug and heroin crisis that we have,” Trump said in a New Hampshire speech earlier in October. 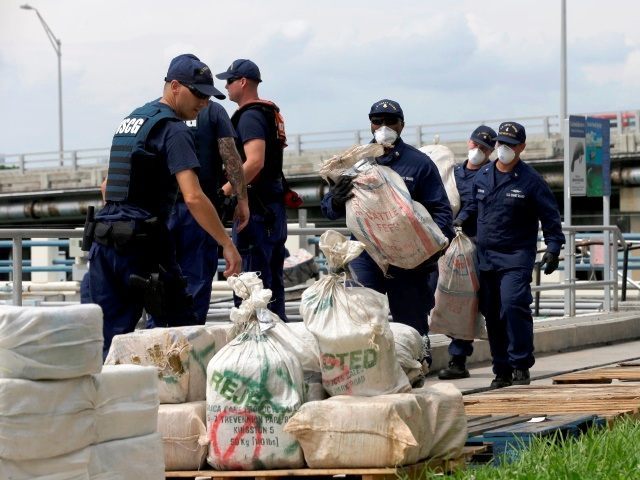 Trump also slammed Obama and Clinton for their lenient crime positions which he says perpetuates the drug epidemic. “President Obama has commuted the sentences of record numbers of high level drug traffickers, many of them kingpins, and violent armed traffickers with extensive criminal histories. Hillary Clinton promises to continue this approach, turning our streets back over to gangs, drug cartels, and armed career criminals,” Trump said.

The Obama administration already released 30,000 convicts in federal prison while following revisions in sentencing guidelines, and the administration may release another 40,000, according to Arkansas Republican Sen. Tom Cotton.

Trump also promised to close “shipping loopholes” that allow China to ship fentanyl, a lethal opioid 50 times stronger than heroin that’s much cheaper to produce, or its components into U.S. communities.

An internal Drug Enforcement Administration briefing analyzed by the Wall Street Journal in June stated that China was the “primary source” of of fentanyl and its building blocks:

China’s sprawling chemicals industry has helped foster this booming trade. So has spotty regulation in China and beyond. While U.S. law limits and monitors trade in key ingredients used to make fentanyl, the chemicals are unregulated in China or by United Nations conventions that police the global drug trade. U.S. law requires that any import or export of pill presses be for “legitimate uses” and reported to the DEA, but China and Canada’s federal government don’t regulate their trade. These gaps allow some traffickers in the Americas easier access to materials that help them set up their own clandestine labs.

Along with cracking down on fentanyl arriving from overseas and Mexico, Trump said he would restrict the number of opioids like fentanyl produced and sold in the U.S.

Trump said he supports the Comprehensive Addiction and Recovery Act, signed by Obama in July, which proponents call the first piece of federal legislation dealing with drug addiction in decades.

He also stated his administration would “expand incentives to use drug courts and mandated treatment,” “expand access to treatment slots and end Medicaid policies that obstruct inpatient treatment,” and “distribute widely naloxone/narcan (opioid antidote to treat OD) to first responders and caregivers” in order to revive drug users dying from an overdose.