In Tuesday’s Presidential elections, Catholics voted for Donald Trump by a greater margin than for any other Republican candidate in the five elections of the new millennium, according to a new study by the Pew Research Center.

Among important demographic groups, Catholics—while not comprising a voting “bloc” per se—still make up nearly 25 percent of U.S. voters and constitute an important force in elections.

In the year 2000, 50 percent of Catholics voted for the Democratic candidate Al Gore as opposed to only 47 percent voting for George W. Bush. In 2004, Catholics shifted their weight to the Republican candidate, favoring Bush over Kerry by 52 percent to 47 percent. Four years later, Catholics again voted Democrat, with 54 percent supporting Barack Obama over only 45 percent for John McCain. Finally, in 2012, Catholics again leaned Democrat, with 50 percent voting for Obama as opposed to 48 percent for Republican candidate Mitt Romney. 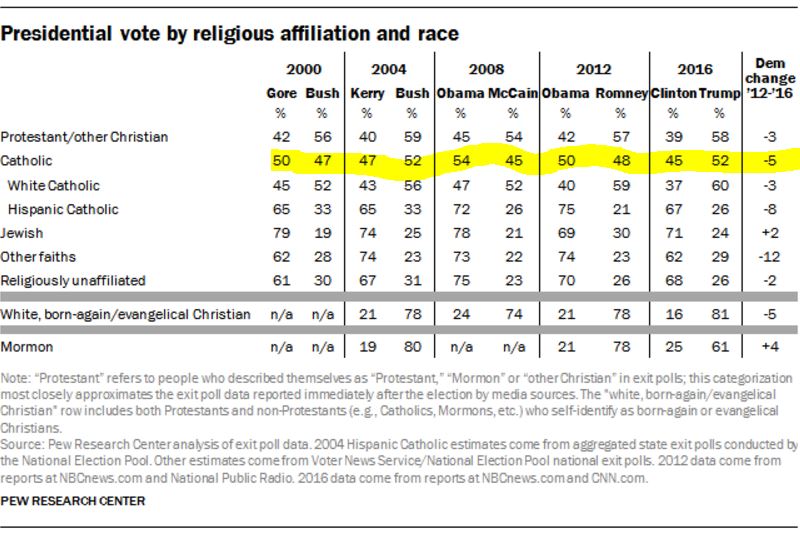 Multiple factors undoubtedly contributed to swaying Catholics to vote for Trump, but three stand out as particularly significant.

First, in the lead-up to Tuesday’s vote, a remarkable number of U.S. bishops spoke out strongly against voting for a pro-abortion candidate and singled out the “Catholic” Vice-Presidential candidate Tim Kaine for special reproach because of his public support for abortion.

In October, Archbishop Joseph Naumann of Kansas called Kaine a “cafeteria Catholic” and questioned why he claimed to be “personally pro-life” while affirming his support of Roe v. Wade and consistently voting to keep abortion-on-demand legal.

In the same month, Denver Archbishop Samuel J. Aquila told Catholics that life issues—and especially opposition to abortion—had to take absolute precedence in deciding whom to vote for in November’s elections.

“Catholics in good conscience cannot support candidates who will advance abortion,” he wrote in the diocesan newspaper, The Denver Catholic.

Then, in late October, Bishop William Murphy, head of the Diocese of Rockville Centre in Long Island, told Catholics that support for abortion “should disqualify any and every such candidate from receiving our vote.”

“Support of abortion by a candidate for public office, some of whom are Catholics, even if they use the fallacious and deeply offensive ‘personally opposed but . . .’ line, is reason sufficient unto itself to disqualify any and every such candidate from receiving our vote,” he said in a letter that was read from the pulpit at every Sunday Mass in the diocese.

Second, along with this vocal moral leadership on the part of numerous bishops, Mr. Trump himself launched a successful outreach to Catholic leaders, assembling an advisory board comprising Catholic politicians such as Rick Santorum and Sam Brownback, as well as a variety of other influential Catholic thinkers and public figures.

Trump paired the naming of his Catholic advisory board with a vigorous letter-writing campaign to Catholic voters, underscoring his concern for issues dear to Catholics and his opponent’s hostility to their causes. In a letter to participants at the Catholic Leadership Conference in Denver, Trump noted that Democratic candidates Hillary Clinton and Tim Kaine would move the White House away from Catholic concerns, especially religious liberty and pro-life causes.

“On issues and policies of greatest concern to Catholics, the differences between myself and Hillary Clinton are stark,” the letter said. “I will stand with Catholics and fight for you.

“Hillary Clinton has been openly hostile to these core Catholic issues for a long time, and is only going to be worse with Tim Kaine now following her lead,” it continued.

Third, the Wikileaks revelations of a deep-seated disdain for the Catholic Church on the part of members of Clinton’s campaign team galvanized Catholics against the Democratic candidate, who had already shown herself to be at best insensitive and at worst outright antagonistic to Catholic moral issues.

After the first leaks, the head of the U.S. Bishops Conference (USCCB) issued a stern statement decrying team Clinton’s efforts to interfere in the Church’s self-governance for “short-term political gain.”

The statement from Louisville Archbishop Joseph E. Kurtz came after news that John Podesta had set up two “Catholic” dummy organizations to exert influence over Church teaching in the wake of the Obama administration’s HHS mandate and to bring about a “Catholic spring.”

In the emails, Sandy Newman, founder of the left-wing group, Voices for Progress, asked Podesta for advice on how best to “plant the seeds of the revolution” within the Catholic Church. In response, Podesta boasted that he had already founded two organizations for this purpose: “Catholics in Alliance for the Common Good” and “Catholics United,” a group accused in 2012 of seeking “to silence the Church from speaking to the great moral issues of our age.”

Kurtz suggested that Podesta’s actions constituted a breach of religious freedom, “one of the founding principles of our republic,” which ensures the right of faith communities to “preserve the integrity of their beliefs and proper self-governance.”

Thus, while Donald Trump was reaching out to Catholics and aligning himself closely to their deepest concerns, the Clinton campaign seemed to be spitting in their faces.

No wonder, then, that when push came to shove, Catholics came out forcefully on the side of the Republican candidate.