Just one in seven American adults strongly believe that Donald Trump’s election is illegitimate, says a new Washington Post/ABC poll, which was released amid a growing campaign by progressives to delegitimize the election of President-elect Donald Trump.

In contrast, 74 percent American adults recognize the election as a legitimate election. That’s three out of four Americans.

The 14 percent who strongly believe the election is illegitimate is only one-in-seven Americans, but that is to launch a major political campaign against Trump. The 14 percent is higher than the 11 percent who said they would never accept George W. Bush’s contested election in 2000, according to Gallup.

Nationwide, Democrats and their allies in the media and entertainment industries are encouraging mass protests against President-elect Trump.

On Nov. 9, for example, President Barack Obama admonished his supporters to keep fighting: “To the young people who got into politics for the first time, and may be disappointed by the results, I just want you to know, you have to stay encouraged. Don’t get cynical. Don’t ever think you can’t make a difference. As Secretary Clinton said this morning, fighting for what is right is worth it.”

Our constitutional democracy demands our participation, not just every four years, but all the time. So let’s do all we can to keep advancing the causes and values we all hold dear. Making our economy work for everyone, not just those at the top, protecting our country and protecting our planet, and breaking down all the barriers that hold any American back from achieving their dreams.

We have spent a year and a half bringing together millions of people from every corner of our country to say with one voice that we believe that the American dream is big enough for everyone, for people of all races and religions, for men and women, for immigrants, for LGBT people and for people with disabilities. For everyone. So now, our responsibility as citizens is to keep doing our part to build that better, stronger, fairer America we seek, and I know you will. I am so grateful to stand with all of you… so we need — we need you to keep up these fights now and for the rest of your lives.

Since then, progressives have been organizing marches against Trump, while their allies in business and the entertainment sectors also complain about the election. On Nov. 12, for example, Kate McKinnon, a comedian working for “Saturday Night Live,” told her audience Nov. 12 that “I’m not giving up, and neither should you.”

The complaints are accompanied by riots and by attacks on Americans, including children and adults.

In Chicago for example, David Wilcox was attacked and his car was stolen by a group of Democratic supporters. “What’s happening to America?” said Wilcox told a Chicago Tribune’s news crew. “You’re supposed to be able to vote in peace! It’s supposed to be part of our democracy. And what happened is, I vote for somebody, and I get beaten, robbed, and my car stolen, and I have no way of getting my wife to and from work safe anymore,” he said. 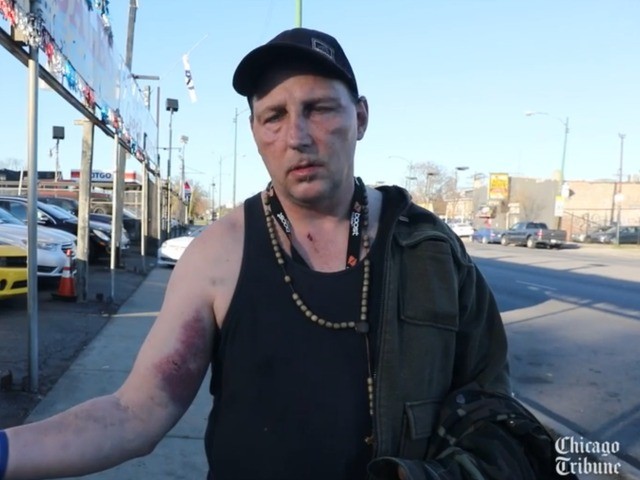 The poll of 665 Americans can be read here.