On the day after Donald J. Trump was declared the President-elect, an incident in a Michigan middle school became big news when video of kids chanting “build a wall” was deemed a “racist” attack on students of color. Now the school is dealing with the backlash from that video and it has some parents upset at the student who posted the footage online.

On November 10, video showing children at Royal Oak Middle School calling out the “wall” chant went viral online, with many insisting it was a “racist” outburst. 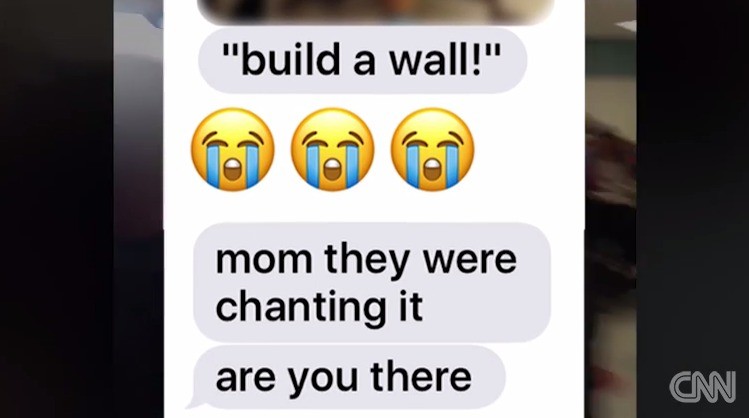 Some Hispanic students later claimed the chants “scared” them and on the day the chant erupted in the school’s cafeteria, school officials even called police on the kids. Local news reports noted that the Royal Oak police department stationed officers outside the school on the day the chant rang out and for several days afterward.

CNN deemed the video an example of “racism” and recently noted that the “collateral damage” from the video is growing.

Many parents, for instance, are upset at the Hispanic student who took the cell phone video of the incident and posted it online, saying that the girl unfairly put their children at risk.

Once the video gained worldwide attention, parents said, their children began to be singled out and set up for harassment. Royal Oak Schools superintendent Shawn Lewis-Lakin also noted that the video was “very disruptive.”

Lewis-Lakin also noted that some of the children delivering the “wall” chant were identified and parents were notified, though the superintendent wouldn’t say what if any punishment was meted out.

But some parents felt that the student who took the video, 12-year-old Hispanic girl Josie Ramon, had put their own children in danger. Some have said the girl should be held accountable.

Josie also told CNN she is feeling the pressure of those who object to her activism.

“When I walked into the room, people would walk out of the room for some reason. People would see me in the hallways and turn around and walk the other way,” the girl said. “I felt like an animal.”

Superintendent Lewis-Lakin insisted he saw both sides of the issue.

“I empathize with parents,” Lewis-Lakin told CNN. “There are parents who are concerned about the negative attention that has come to their children’s school.