The nation’s overall progress reversed and then slid backwards during the eight years President Barack Obama has been in the White House, according to Gallup’s new survey of American adults.

“Asked about the state of the nation over the past eight years, Americans say the U.S. gained ground in four of 19 policy domains, and they say it lost ground on 14 and held steady on one,” said the Gallup press statement, which highlighted factors deemed favorable to Obama.

The public sees “the biggest setbacks on the federal debt, crime, the gap between the rich and the poor, and race relations,” Gallup admitted.  Those grades were, respectively,  minus 36 percent, minus 35 percent, minus 34 percent, and minus 27 percent for “race relations,” Gallup acknowledged. Obama also scored minus 7 percent when Americans were asked about the “situation for blacks.”

Overall, the public graded Obama’s accomplishments as a minus 9 percent rating in the survey, which was taken Jan 2 to Jan. 3.

The survey highlights the public’s ambivalent attitude towards Obama, who also gets a 57 percent approval rate from Gallup’s surveys.

In part, the public wants to like Obama, and tends to like his apparently cheerful demeanor — yet is deeply divided about the merit and effectiveness of his actual policies. For example, the public’s view of healthcare is a wash, despite Obama’s huge push for his Obamacare expansion of federal power over the healthcare sector. 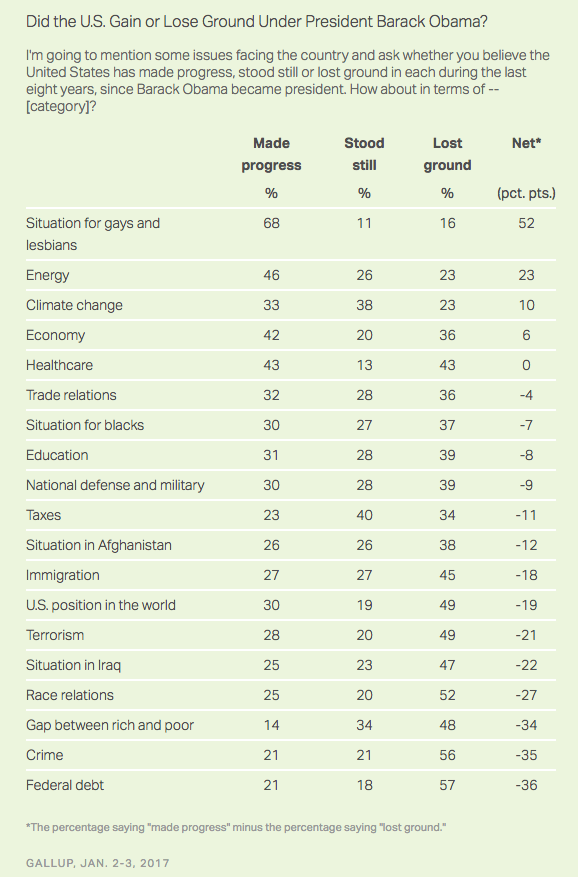