A Washington state mom is gathering signatures for a ballot to recover sexual privacy for women in public bathrooms and showers, but her non-partisan group is getting hit by invective, workplace pressure and stigma from transgender activists and the state’s progressive establishment.

Kaeley Triller Haver heads Just Want Privacy, the group which is collecting signatures and funding to get Initiative 1552 on the November ballot in Washington state. She needs 330,000 valid signatures by July 6, and she’s already got 200,000 signatures – and has many signature sheets still being shared by supporters around the state.

‘We know this is crunch time this week… we have distributed many petitions to people who promised to get them filled up,” she told Breitbart. “The question is whether people will turn them in on time.”

The popular initiative is intended to reverse a 2015 edict by the appointed, five-member, Washington Human Rights Commission, which says men can use women’s bathrooms and showers — providing they declare they have a female “gender identity.” The anti-privacy, pro-transgender rule applies to government facilities and to businesses with more than eight employees.

The rule is intended to enforce the “transgender ideology” which insists that a person’s biological sex is legally less important than their unverifiable “gender identity,” and also insists that other Americans agree that men can be women, and women can be men, depending on their hidden “gender identity.” Transgender advocates also oppose any regulation or rule-of-thumb that would help people distinguish between males or females because they oppose any civic distinctions between the two sexes.

The gender-over-sexes fight was inflamed in February 2016 when a man walked into a women’s changing room at a swimming pool, refused to leave and cited the commission’s ruling as his legal justification.

In response, the commission argued that it will act benevolently to the managers of swimming pools or businesses who eject men whom they think are taking advantage of the rule barring single-sex facilities. “The Human Rights Commission will look upon this as an opportunity for education, not for punitive action,” said a February 2016 statement.

Haver’s pro-privacy push is being resisted by the state’s establishment, including politicians, name-brand businesses, and media

On the ground, her signature collectors are being accosted and followed by ‘transgender’ activists.

“It is aggressive,” she said, adding: “The [transgender] activists go to our Facebook pages to find out our employers and write letters to our employers to get us in trouble. They go through financial records and [try to] shame people who donated and … I’ve even gone into churches where they’re [saying] ’I agree with you but I can’t put that on my Facebook,’” for fear of workplace discrimination, she said.

Transgender activists froze and then captured her group’s first Facebook page, forcing her to build another page with a longer title. The captured page is now used to broadcast the core pitch of the gender-before-sexes claim,  “Trans women are women”

This is Haver’s second page with the longer title, “Keep locker rooms safe and sex specific.”

The opponents’ invective can be hostile. 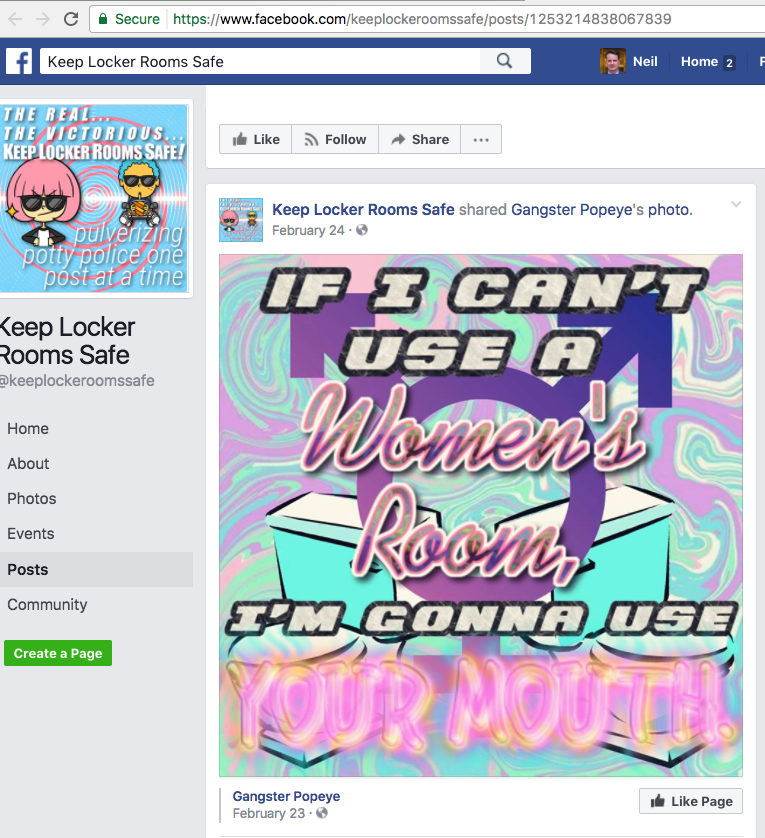 The invective was on display at a June 2016 public event, where liberal and conservative activists joined to speak up for government recognition of the biological and civic distinction between females and males, and for the linked protection of sexual privacy in different-sex bathrooms. “One hundred and one trans women were murdered this year because of the hate that you promote,” a transgender activist shouted.

The establishment media has lined up with the transgender activists, Haver said.

The Seattle Times‘ editorial board declared “Don’t roll back transgender protections,” and dismissed the grou[‘s plea for privacy as “the toxic policy and politics of the transgender bathroom debate.”

The editorial board for the state’s NewsTribune.com site played the same tune, arguing that any disagreement with the transgender groups as warmongering or akin to racism. Their headline “No more transgender toilet wars” ran above an article insisting that the pro–transgender, anti-privacy rule “pulses with the spirit of Dr. Martin Luther King, the heroic preacher of equality.”

“I’ve not seen any objective [media] coverage — all media here is activist,” Haver said. “We’ve stopped responding to media inquiries because it is not worth our time.”

Back by the media, the pro-“gender” group artfully positioned itself as the victims of “discrimination,” and posted a list of companies who are backing the gender-over-biology argument. The companies include AirB, Air Alaska, the state chamber of commerce, Capital One, Google, Facebook and AT&T, and they are backed by the progressive, pro-diversity lawyers at the ACLU.

The business and media pressure has also deterred donations, said Haver. In August 2016, the senior chef at the Seattle Seahawks’ stadium chef gave $1,000 to the privacy campaign. His donation was made public and he was quickly battered by media and elite pressure. The chef quickly recanted to save his career, and posted a message on Facebook:

It’s been a very eye-opening 24 hours. I’m sorry to the people that I have harmed or negatively affected with my words and my actions. It’s not who I am, and it’s not who I want to be …  My concerns about the proposed law were based on fear, not facts, and I now have a better understanding of that, and I would never support the proposed law — not now, or in the future.

The state’s Secretary of State also rewrote the I-1552 language which voters see on the ballot. The description hides the gender-overrules-biology changes imposed by the commission, described single-sex bathrooms as “gender segregated,” and also hid the privacy protections that K-12 kids and women would gain from the return of single-sex bathrooms and shower rooms.

This measure would amend the Law Against Discrimination to redefine “sex,” “gender,” and related terms to be based on biological sex at birth. With exceptions, covered public and private entities could restrict access to “private facilities” based on sex at birth regardless of gender identity. It would restrict state and local regulations banning gender-identity discrimination. It would require that some public school facilities be gender segregated and authorize lawsuits against schrools that fail to comply.

But Haver’s advantage is that polls show that strong majority of ordinary Americans oppose the gender-beats-sexes claim by transgender activists, they want sexual privacy in bathrooms and shower rooms — especially in K-12 schools. Even as Americans want to keep their sexual privacy, most as also willing to be polite and friendly to the very few “transgender” people who wish to live as members of the other sex.

Haver’s group is also linked with the Family Policy Institute of Washington, which has produced several videos about students’ attitudes towards sex and gender. The group also pushed back against the media’s alliance with the transgender groups.

The transgender ideology claims that people have a hidden “gender identity” which is independent of their sex and biology, and which justifies claims to be legal members of the opposite sex.

The ideology also demands that the federal government force Americans to accept the “gender identity” sex-switching claims made by each person, regardless of scientific data about genetics, biology and the variety of normal behavior and appearances shown by normal equal-and-complementary women and men.

The progressive push to bend Americans’ attitudes and their male/female civic society around the idea of “gender” has already attacked and cracked popular social rules for how Americans handle the many charming differences between complementary men and women.