SEVNICA, Slovenia — It’s a short book, just 42 pages and some filled with photographs. But it goes a long way in explaining the facts about the strong, proud people who carved a small but free nation out of the former Communist Yugoslavia and produced one of the most famous women in the world: Melania Trump.

Author Sandi Gorisek doesn’t consider himself a writer, although he admits he is fond of dreaming up fairy tales to share with children.

“I’m a storyteller,” says Gorisek, who makes a living as a mechanical engineer in a town just a few miles away from Melania’s hometown of Sevnica.

But since Donald J. Trump decided to run for president — and then won — elevating his Slovenian wife to first lady, Gorisek had a “now or never” moment.

The result: Melania Trump; The Slovenian Side of the Story, a quick read full of historic facts, insightful observations, and revealing truths about a patriotic people who are tough survivors of Communism and enthusiastic entrepreneurs in their now free homeland. 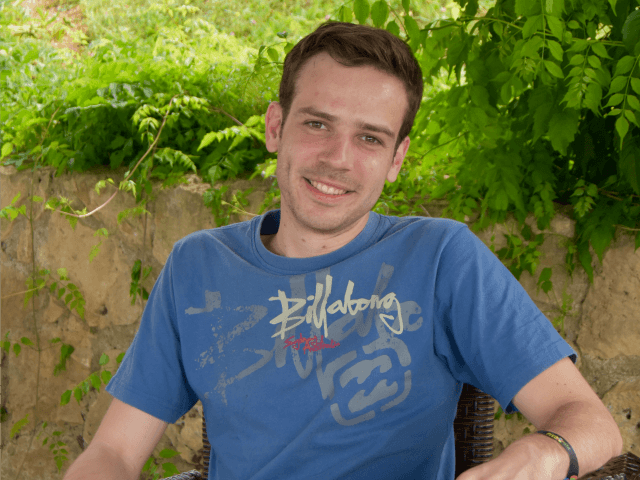 Gorisek told Breitbart News, in fact, that 30 years ago he would not have been able to write his book about Melania because of government censorship. At 33, his life has mostly unfolded in a free Slovenia that earned its independence during the 10-day war in 1991.

Gorisek spoke with Breitbart News in Sevnica about his book, which reveals how Melania Trump’s past shaped her and how her new role as America’s first lady could help shape the future of her new home.

The book’s introduction tells readers facts about Gorisek’s and Melania’s parents. Both of their fathers joined the Communist Party when it was required, ironically, to get ahead. His mother and Melania’s both worked at Jutranjka, a children’s clothing factory that is now home to a booming plastics business.

But, Gorisek wrote, he did not want so much to debate about the past and its role on the present in the book, but to share instead how it produced the people living today, including Melania Trump.

“The aim of this book is to show how growing up in this atmosphere created and nurtured beliefs from the time period that have influenced all of us, including Mrs. Trump,” Gorisek wrote.

In the introduction, Gorisek talks about the role women play in Slovenian society and how they affect family life and the larger culture. 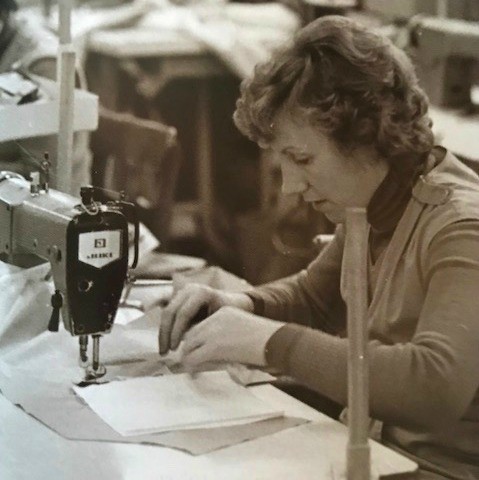 A woman works on children’s clothing at the Jutranjka factory in Sevnica, Slovenia, in 1983. Melania Trump’s mother once worked there. (Courtesy of Sandi Gorisek)

This is reflected in a “well-known Slovenian saying that states that a wife supports three corners of the house, which refers to how women influence men in a more profound manner than we can imagine.”

“It is not too arrogant to say that the future of the USA and its population will be partly tailored by the patterns and principles leaned from the people of a small, proud nation situated on the sunny side of the Alps,” Gorisek wrote.

Gorisek does, however, look back and explain that while Communists “frowned upon” individuality, the government inadvertently raised up a generation of “real men.”

“A generation of real men emerged,” Gorisek wrote. “Men capable of building houses and towns with their bare hands” and with the help of relatives and neighbors.

Gorisek wrote that capitalism and no military draft “has gifted us with a litter of gin-and-tonic hipsters as their replacement.”

In fact, Slovenians are living a kind of “American Dream” as a result, with a house and a garden the common goal for everyone that has largely been achieved.

“A legacy of that system can be seen today in the high rate of privately-owned property, which surpasses almost every Western country,” Gorisek wrote, citing, in fact, that Slovenia has the highest percentage of single unit home ownership in the European Union.

He also wrote about the legacy of a generation raised with discipline and the lack thereof in the new generation. 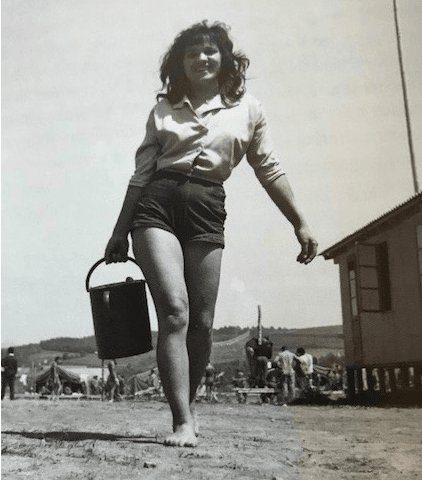 A woman in a work brigade helps build a highway in Slovenia circa 1958. (Courtesy of Sandi Gorisek)

“Back then, corporal punishment for misbehaving was well know and many children, including yours truly, would get a slap around the head for causing problems at school, and, which is even more important, another one at home if you tried to explain away the reason.

“Authority was something to respect,” Gorisek wrote, blaming an “easy money” mentality of those who misunderstand Capitalism. “Nowadays, kids learn the word ‘lawyer’ before they learn basic duties and responsibilities.”

Gorisek is old enough to remember when Slovenians had to smuggle basic goods like oranges and coffee into their country and, in his case, Legos, which he said made him the most popular kid in his neighborhood.

In Chapter 3, entitled, “The Apple Doesn’t Fall Far From the Tree,” Gorisek wrote about the courage imparted to Melania by her mother.

“Putting your child on the catwalk at the age of five in order to increase her interest in fashion and to go against the popular opinion that the only proper color was gray was and still is courageous.

“The same goes for her father, who, rising from company driver and member of the Party, established a business importing and exporting car parts,” Gorisek wrote.

The author also praises Melania for stating that one of her missions as first lady will be preventing online bullying — and standing up to media bias at the same time.

“Knowing that most of the national television networks in Slovenia, excluded stated-owned ones, are part of giant networks mostly owned by the USA, I would say that our journalists covered the elections based on the bias of their owners and in combination with our believed, shared online animosity — and that is certainly damaging to our young ones.”

Gorisek goes on to say: “I am not a politically-oriented person and most of my knowledge in this field has been gained in order to write this book, but I do admire Melanie for being a Slovenian with guts.

“She worked as a model most of her life and is certainly accustomed to her share of low punches,” Gorisek wrote. “The fact that she withstood all of the attacks as regard being labeled as a gold-digger and not being a clever immigrant due to her lack of knowledge of the language is something to praise.”

The author also praises Melania for her speech at the 2016 Republican National Convention, where Gorisek believes she helped her husband on his road to victory and contradicted the “baised media” claims against her husband and presidential candidate Donald Trump.

In the book’s final chapter, entitled, “The Show Must Go On, Slovenian Style,” Gorisek wrote that the largest Christmas tree in Slovenia’s capitol Ljubljana is now called Melania, but it is a place thousands of miles away where her impact may be much greater.

“Melania, as the first lady, will be successful, as she has proven many times,” Gorisek wrote. “She knows how to stay focused no matter what the naysayers say.

“Throughout the writing of the book, a few lines from her husband echoed in my head, and I would like to quote one since that is the reason why I, not a professional writer, was able to finish the book.

“Do what you like, stay focused and ride the momentum,” Trump said.

Meanwhile, Gorisek is staying focused on selling his book, including to Americans when he visits the United States in the coming months.