I agree with Laura Ingraham and Pete Hegseth. It is only a matter of time before the left comes for Monticello, or Mount Vernon, or indeed Mount Rushmore.

Never content with their destructiveness, wait until they learn the history of Mount Rushmore. Not even 1,000 Confederate statues would draw the same outrage.

Gutzon Borglum originally worked on the Stone Mountain project, which one Democrat candidate has already demanded be permanently vandalised in an attempt to erase American history. As AJC News reports:

Removing the faces of Jefferson Davis, Robert E. Lee and Stonewall Jackson would take a monster of a sandblaster and require a change in state law. The Georgia code has a clear mandate for the memorial, saying it should be “preserved and protected for all time as a tribute to the bravery and heroism of the citizens of this state who suffered and died in their cause.”

How befitting then, that the totalitarian left should come for the Shrine of Democracy next. After all, the Nation of Islam has already decried the great American monument, and the uncomfortable truths about its sculptor will add fuel to the fire for the anti-conservationist minded.

Writer Alex Heard revealed in the New Republic some correspondence between Borglum and then-KKK Grand Dragon D.C. Stephenson, who cut his political teeth in the Socialist Party, before joining the Democrats, then in later life, defecting to the Republican Party.

“In addition to Jews and blacks, he especially disliked Catholics and the ‘wretched refuse’ who are welcomed with raised torch by the Statue of Liberty.”

As it was in colonial America, the young country’s expansion was fueled by “Manifest Destiny” — a self-supreme notion that any land coveted by Euro-Americans was, by providence, rightfully theirs for the taking.

The sculptures were chiseled by an imported Ku Klux Klansman on a granite mountain owned by indigenous tribes on what they considered sacred land — land that the U.S. Supreme Court said in 1980 was illegally taken from them.

In other words, the left has already been laying the groundwork for an assault on this iconic monument.

What better way to do so, as Mr. Way does, than by calling into question the track records of the men it depicts?

Of the presidents, Way writes:

But the four also sanctioned, and themselves practiced, dominance over those with darker skin.

Abraham Lincoln famously emancipated slaves, but he supported eradicating Indian tribes from western lands and approved America’s largest-ever mass execution, the hanging of 38 Dakota in Mankato for their alleged crimes in the 1862 war along the Minnesota River

Teddy Roosevelt, in his “The Winning of the West,” wrote: “I don’t go so far as to think that the only good Indians are dead Indians, but I believe nine out of every ten are … .” 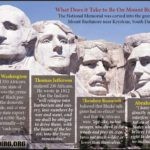 Rushmore graphic by the Nation of Islam

The rhetoric is handily similar to that invoked by the Nation of Islam. An image carrying the group’s web address states:

“George Washington enslaved 350 Africans. His home state of Virginia was the prime breeder of Black people for the domestic slave trade, and at one point the state exported at least 6,000 Black people annually — its biggest ‘cash crop’.

“Thomas Jefferson enslaved 200 Africans. He wrote in 1812 that the Indians ‘will relapse into barbarism and misery, lose numbers by war and want, and we shall be obliged to drive them, with the beasts of the forest, into the Stony mountains.’

“Theodore Roosevelt believed that Blacks’ religions had no ethical basis and that the Africans were ‘ape-like, naked savages who dwell in the woods and prey on creatures not much wilder or lower than themselves.

“Abraham Lincoln [said:] ‘I have no purpose, directly or indirectly, to interfere with the institution of slavery in the States where it exists. I believe I have no lawful right to do so, and I have no inclination to do so’.”

There is much to be said on all these issues, for instance, in the very same letter cited by the Nation of Islam, Jefferson wrote of his “attachment and commiseration” for “Indians”. He recalled to John Adams of Outassete, “the warrior and orator of the Cherokees”, that “His sounding voice, distinct articulation, animated actions, and the solemn silence of his people at their several fires, filled me with awe and veneration”, and explained his defensive posture, rather than the aggressive nature implied by the aforementioned quote: “The possession of that country secures our women and children for ever from the tomahawk and scalping knife”.

As much as I wish the revisionist, half-baked “history” of these men and the monuments to them was simply on the fringes of the internet, it has even begun to penetrate American classrooms.

Fox News reported in 2014 that the mother of an eight-year-old child found “a handout from the Nation of Islam that portrayed the presidents on Mount Rushmore as being racists”.

Sommer Bauer tells me her son was given The Nation of Islam handout at Harold McCormick Elementary School in Elizabethton. The handout asked “What does it take to be on Mount Rushmore?”

In 2015, the hard-left website Daily Kos published an article about “sanitized” American history, pointing to Stone Mountain and Mount Rushmore as monuments built by a KKK member. But their own sanitization is clear for most with a working knowledge of American history to see.

Klan membership was around 5 million nationwide in the 1920s when construction began on Rushmore. This meant about three in 20 eligible people in the United States were members of the KKK. Can you guess which political party was most heavily affiliated with the Klan? The Democrats, of course.

In fact there were so many Klansmen in attendance at the New York-based convention that the whole episode came to be known as “Klanbake“, and descended into a farce the likes of which had never been seen before in U.S. political history.

It took the party 103 ballots to settle on a presidential candidate, and they ran extraordinarily close to nominating the Klan’s favoured candidate William McAdoo, who never rejected the KKK’s support.

No mention of this, of course, by any of those who have already attempted to bring the history of the monument into question. No apologies either, from the Democrats who continue to support the tearing down of these statues and symbols, for the fact that their own party fostered and incubated a lot of the views they now claim to stand against.

These are the excuses deployed by the left. Nothing excuses older history as far as their foot soldiers are concerned. But these are their excuses.

It is worth recalling that while many think the Democrat obsession with race ended in the 1930s and 40s, it did in fact get arguably worse: underground.

Author Robert A. Caro’s notes in his book Master of the Senate: The Years of Lyndon Johnson III, the Democrat president once uttered the following words, aboard Air Force One, no less:

These Negroes, they’re getting pretty uppity these days and that’s a problem for us since they’ve got something now they never had before, the political pull to back up their uppityness. Now we’ve got to do something about this, we’ve got to give them a little something, just enough to quiet them down, not enough to make a difference. For if we don’t move at all, then their allies will line up against us and there’ll be no way of stopping them, we’ll lose the filibuster and there’ll be no way of putting a brake on all sorts of wild legislation. It’ll be Reconstruction all over again.

Doesn’t this just go perfectly hand-in-hand with Democrat duplicity? The history of Planned Parenthood, for instance, whose founder even gave a talk to a KKK women’s branch.

We’ve been here before. At least, other human beings around the world have.

I’m not talking about those who have cast off oppression who, in the fervor of celebration, pull down the likenesses of Saddam Hussein or similar. I’m talking about the fascists within Islamic extremist movements who want to obliterate the history of the areas they conquer. I’m talking about the French revolutionaries who sought to purge their nation’s history. These things are usually a prelude to the purging of ideas, and eventually people too.

It follows that such attitudes — the “cultural appropriation” of the joy of those freed from legitimate tyranny — would lead to a country more divided than united.

But realistically, if the left wants to continue tearing down America’s history — no matter how ugly, especially when uncontextualized — then there is one major institution they absolutely must also destroy in order to be morally, historically, and intellectually consistent: the Democratic Party of the United States.

Raheem Kassam is the editor in chief of Breitbart London and author of the book No Go Zones: How Shariah Law is Coming to a Neighborhood Near You