Corporate-owned Vice Magazine posted an article urging “Let’s Blow Up Mount Rushmore” which called for Americans’ politics, culture, and history to be purified by political fire.

“Let’s take with us the righteous ideas and beliefs and leave everything else on the pyre,” says the article about Rushmore by Wilbert Cooper, who is a senior editor at Vice.com. The media company is part-owned by Rupert Murdoch’s 21st Century Fox, and by A&E Networks, which is fully owned by Hearst Communications and Disney-ABC Television Group. According to Cooper:

More than ever, old monuments to famous white American men are being threatened … [because] the only way we can help America fulfill her promise is by shedding the faith and facing the truth. A big part of that process probably involves taking those men we’ve placed so high and bringing them back down to Earth where we can judge them for who they really were… As long as we allow those men to be cults of personality who exist beyond reproach, we’re never going to be able to see them for all of their good and all of their evil.

The article’s headline was later changed to “Let’s Get Rid of Mount Rushmore.” 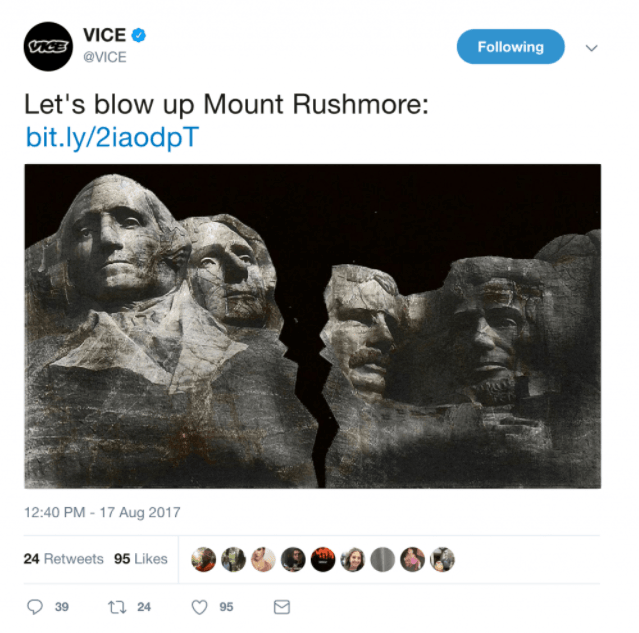 The company explained why it delete the tweet and headline, saying:

Cooper argues that the nation’s historical markers and monuments help preserve a political system of racial exploitation and inequality, and should be erased to help build a new society.

It’s hard to be critical of a system when that system becomes an article of faith, filled with myths (the cherry tree), deities (Founding Fathers), and notions of salvation (the City on a Hill). It’s going to be impossible to improve America if we can’t be honest about its origins and its past. Her fruit is born from violence and greed, watered by the blood of my ancestors.

Cooper downplays America’s political, cultural, economic and technological contributions to the world, and he also ignores near-term debates about investments, wages and immigration reform, education improvements, economic opportunity and much else in favor of a high-emotion campaign to erase historical symbols on the nation’s boulevards:

Trump and his white supremacist cohorts believe the reverence some Americans have for these statues is simply respect for history, and that tearing them down is tantamount to ripping pages out of a textbook. But monuments built by the state are not history—they are manifestations of power. They don’t tell you who, what, why, or how something happened. Instead, they just inform you who’s in control. This is even true with the Confederate statues, even though the South lost the war. The reality is that the enshrinement of those generals in statues across the nation mostly did not happen right after the war as a tribute to lost struggle. Instead, they were built in the early 1900s and the 1960s, when it was crucial for those in power to signal that white supremacy would endure in the face of Reconstruction, the Progressive Era, and the civil rights movement. Erecting these statues amounted to power moves by white people who felt threatened. And now that they are being toppled, and neo-Nazis fight against their removal, their true meaning has become clearer than ever.

…. I’m not sure that a monument put on by the state, which still perpetuates violence across the world and has immense inequality here at home, could ever produce a work that truly honors the real, radical legacy of Dr. King. King was a man who damned capitalism and war as much as he strived for black boys and black girls to hold hands with white boys and white girls.

Cooper’s argument for the erasure of historical markers, such as statues, echoes the growing demand from other left-wingers for a culture war that would sweep away Americans’ political traditions and heroes. Those targeted heroes include two of the men memorialized on Mount Rushmore — Thomas Jefferson, who served as both a president and as the chief author of the Bill of Rights, such as the First Amendment, and also General and President George Washington, who declined offers to become a dictator after winning the Revolutionary War.

Those targeted heroes and political ideas include those symbolized by two of the men memorialized on Mount Rushmore — Thomas Jefferson, who served as both a president and as the chief author of the Bill of Rights, such as the First Amendment, and also General and President George Washington, who declined offers to become a dictator after winning the Revolutionary War.

In prior articles, Cooper has focused on racial inequalities even when writing about non-racial debates, such as the debate over the impact of imported labor on Americans’ wages. Shortly before the 2016 election, for example, he urged African-American voters to ignore candidate Donald Trump’s promise of pro-American immigration reform, writing:

When Trump and his ilk make immigration a bogeyman, they conveniently ignore the systemic racism blacks have been facing for decades. It’s a lot easier to harp on the specter of immigrants stealing jobs than it is to explain how mass incarceration and housing discrimination have actually robbed generations of black people of opportunity and wealth.

If you’re one of the black folks who’s worried about our people’s economic prospects in this country, remember that the key isn’t finding a scapegoat or a shortcut to the problem at hand. Closing inequality between black and white can’t be done by building a wall to keep out people, who in many instances, look like you. Instead, it begins with the very real work of addressing the institutional racism that has been essential to this country long before there was even a border to cross.