BIRMINGHAM, Alabama — Judge Roy Moore, the GOP frontrunner for the special election for the U.S. Senate GOP primary runoff on Sept. 26 here, fired up a crowd of 50 supporters here in Birmingham on Thursday night. 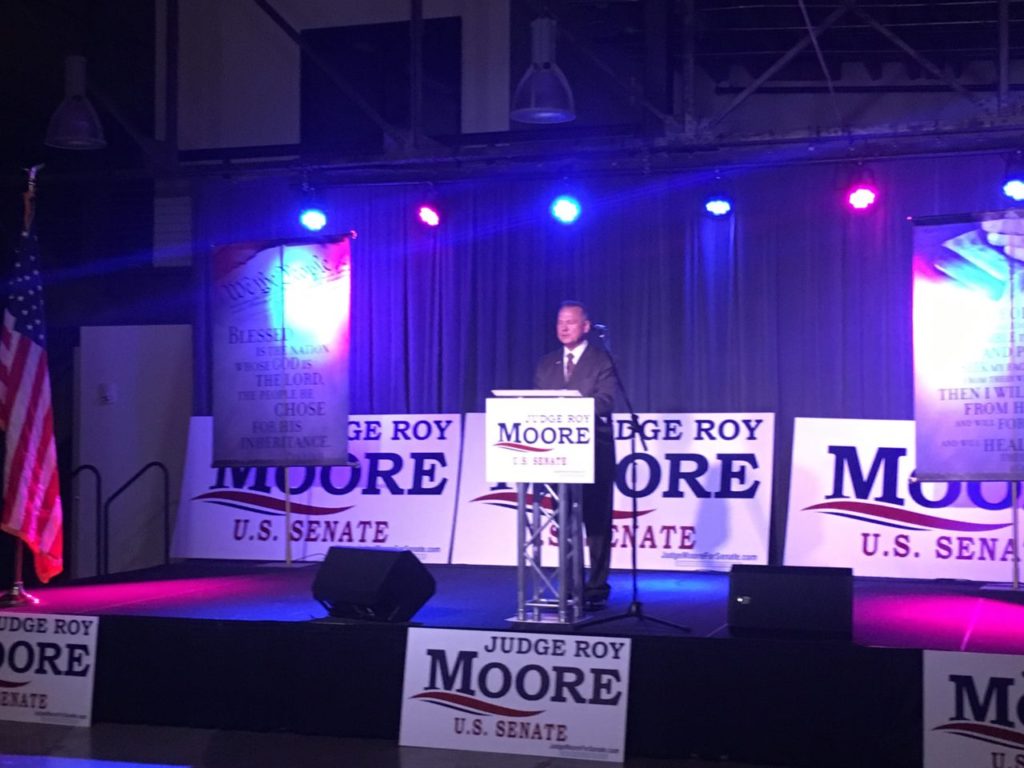 Moore said from the stage at his campaign rally:

I thank everybody serving in the military. I was in the military for many years. I was a graduate of West Point. I’m a Vietnam veteran. I went to war. I’ve seen what this country faces in the future, and it’s in peril right now. We’ve got to make our military strong. We’ve got to make our economy prosperous again. This is what people want. They want to bring industry back to our country. They want to stop unfair trade regulations. They want to stop taxes, and the labors we go under in business. They want a free enterprise system which can Make America Great. But the big obstacle is the federal government. We’ve allowed judges to take over this country. We must bring back an acknowledgment of the Constitution that it is the supreme law of the land. And by the way, I’m asked often: ‘Is God’s law higher than man’s law?’ Of course it is.

Then Moore detailed how his stands with President Donald J. Trump on his agenda—and he hammered his opponent Luther Strange for attacking him inaccurately on Twitter earlier on Thursday. Strange has resorted to desperate and inaccurate attacks against Moore in the final weeks of the campaign as he has been unable to generate any real momentum, while Moore towers over him in the polls. Moore said:

I support President Trump, and I support his efforts to Make America Great Again. He’s having a battle just like I mentioned here. He’s under a spiritual attack of which way to go, and I know that and I can help him. I fully support him. But my opponent has taken something today and tweeted something I said to take to Trump to try to get him to come down here by saying that I oppose him. That’s ridiculous. I have never opposed him. I spoke at the inaugural prayer breakfast in Washington, D.C., and stated there that I believe that God placed President Trump in that position. Is he a perfect man? Nobody is perfect. Was David [of David and Goliath] perfect? David wasn’t perfect. He was an adulterer and a murderer. And God saw his future, before he slew Goliath. But He knew his heart. And I think He knows Donald Trump’s heart. But Donald Trump needs prayer, just like we all do because he’s being torn and I support Donald Trump and it’s ridiculous to say that I don’t. But that’s what this campaign is about. It’s about a bunch of lies coming and attacking us and saying dumb things we haven’t done, saying we’ve taken money, saying we flew on planes, all of this has been proven by Channel 13 which did a fact-based investigation it showed it was wrong. They’re running the ads. That’s what we’re facing, it’s a spiritual attack.

Moore then quoted from Isaiah 40 from the King James Bible, and the crowd roared again.

Later in the speech, Moore hammered activist judges again. “Today, we see judges up in Washington taking football coaches that go to the 50-yard-line and kneels down and says a silent prayer and say ‘he can’t, he has to be removed,’” Moore said. “Where have judges gotten that authority? We have forgotten that government is restricted.”

He also continued his streak against the Washington establishment. “Just like the Democrats and the Republicans are against each other, they don’t want me coming up there,” Moore said. “I know that. I know they don’t want to hear the truth.”

Moore also hammered the narrative that the United States is a nation in crisis, and in need of leadership from men like him instead of followers of Senate Majority Leader Mitch McConnell like Strange. Moore said:

Our foundation is being shaken to the core in America today. It’s being shaken by division, by hatreds, prompted by people who would destroy our nation and tear us apart. I recall when Harry Truman said in 1949—I don’t recall it then, I was just two years old, but I’ve heard it since—he said, ‘the American people stand firm in the faith which has inspired the nation from the beginning.’ ‘We believe that all men are created equal because they are created in the image of God. And ‘from this faith we will not be moved.’ I’m going to tell you, people, we’ve been moved. We’ve been moved in Washington. We’ve been moved in every state. We’ve been moved in every court. We have got to go back to the acknowledgment of the sovereignty of God.

He rounded out the address by putting in stark contrast the terms of this election: “We’ve got to go back to be good again, before we can be great,” Moore said. “And to be good, it’s up to God not to us. But it’s up to us to stand up, to stand up for God’s solitude. They don’t want to hear it in Washington, they don’t want to hear about the Constitution. They want to keep fighting. They don’t want to do anything. The resistance I’m facing is immense. This campaign signals whether we change America or not, whether in 2018 the senators who are elected will fall prey to the establishment in Washington which does nothing, wants nothing done, doesn’t want to change the privileges, don’t want to leave their offices and their high powers, or whether we will go a different direction together as one people. One people under God with liberty and justice for all.”