Only four percent of ‘DACA’ recipients have completed college, far below the roughly 17 percent of similar-aged young Americans who have college degrees, according to data released by the Migration Policy Insitute, which favors immigration.

The data means that average DACA beneficiaries are far less educated and less productive than Americans, and if ever awarded an amnesty, will be far more likely to rely on taxpayers’ aid throughout their lives. According to the MPI report:

While DACA recipients are almost as likely as U.S. adults in the same age group (15-32) to be enrolled in college (18 percent versus 20 percent), they are far less likely to have completed college (4 percent versus 18 percent).

However, the DACA beneficiaries comprise only one-third of the roughly 1.78 million young illegals who are aged 15 or older in September 2017, according to the MPI data. If the roughly 30,000 DACA beneficiaries with four-year college degrees are compared to this larger group of 1.78 million, then only 1.7 percent of young ‘dreamer’ illegals aged 15 to 32 hold four-year college degrees.

That ‘dreamer’ graduation rate is just one-tenth of the 17 percent of similar-aged Americans who hold four-year college degrees.

The new data contradicts media-magnified claims by Democrats and business groups that the 690,000 young DACA illegals and the at least 2 million ‘Dreamers’ can rejuvenate the U.S. economy and culture in ways that mere Americans cannot accomplish. For example, FWD.us, a lobbying group created by Silicon Valley investors, declared in September 2017 that:

Dreamers are vital to the future of our companies and our economy. With them, we grow and create jobs. They are part of why we will continue to have a global competitive advantage.

The FWD.us group was formed to increase the supply of foreign white-collar workers, and it is using the DACA controversy to attack political support for President Donald Trump’s popular pro-American immigration reform principles.

Similarly, Tim Cook, the CEO of Apple, insisted in September the DACA amnesty is “the biggest issue of our time,” that Americans are inhuman for not supporting a no-strings amnesty, that DACA illegals are better Americans than Americans, and each illegal is as useful to the economy as billionaire Mike Bloomberg:

This is the biggest issue of our time because this goes to the values of being American. This is ‘Are we human’? ‘Are we acting in a track of morality?’ right? These people … At Apple we have many … they love America deeply. When you talk to them, I wish everyone in America loved American this much. They have jobs, they pay taxes, they are pillars of their community, They’re incredible people, and so, to me, it would be like someone coming to Mike [Bloomberg] and saying ‘Mike, I just found out you aren’t really a citizen here, you need to leave.’ This is unacceptable. This is not who we are as a country, and so I am personally shocked that there is even a discussion of this.

Democrats want to provide a ‘Dream Act’ amnesty to at least 3 million of the younger illegals, which would also allow them to bring in roughly 10 million chain-migration relatives from Mexico and other countries. In September 2017, the two top Democratic leaders in the House and Senate — Rep. Nancy Pelosi and Sen. Chuck Schumer —  declared:

In our home communities, there are Dreamers like Jessica and Javier. Jessica was brought to the United States at the age of 2 and did not know she was undocumented until middle school. In 2011, she secured a full-merit scholarship to the Macaulay Honors College at CUNY and started on her journey to becoming a doctor.

We have both met Dreamers and heard their stories. We know that these young people represent what’s great about our country and they should be allowed to stay. They are an integral part of our communities, and their stories, their tenacity and fearlessness make them as American as apple pie.

The MPI data shows a much more modest contribution by the 382,000 illegals who hold jobs because of their DACA work-permits.

The occupations most commonly employing DACA holders are food preparation and servicing (16 percent, or 60,000 workers), dales (14 percent, or 54,000 workers) and office and administrative support (2 percent, or 47,000 workers) … About 5,000 work as health-care practitioners…. Almost 3,000 each work in business operations and in computer or mathematical operations. 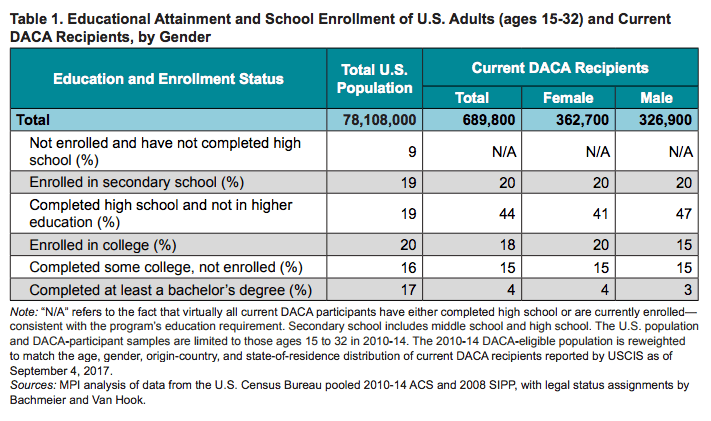 Also, a website run by the education-sector trade group reports that only 5 to 10 percent of the young illegals even enroll in college, even though the illegals face few restrictions in most states. The percentage estimate means that only 6,000 young illegals sign up for college each year, according to the American Council on Education.

The low academic performance of the DACA recipients likely has many causes, including their parents’ inability to pay the financial costs of U.S. college, the low quality of schools in the migrants’ home countries, and the limited ambitions and abilities of their parents, many of whom were peasants or uneducated urban workers who were admirably determined to build a better lives for themselves and their children.

Other studies show that most migrants perform very poorly in Americans schools. For example, a study released November 1 by the Anne E. Casey Foundation showed incredibly poor reading and math proficiency of fourth grade and eight-grade immigrants. According to a report in Breitbart News:

“On most of the measures we track in Race for Results, children in immigrant families fare worse than those in U.S.-born families,” the study authors purport. “Especially troubling are the large gaps in many of the education measures of both children and their parents.”

Federal data shows that the low educational level of migrants also ensures lifetime dependence on taxpayers’ aid and welfare, including Obamacare. For example, a 2015 report by the Center for Immigration Studies showed:

In 2012, 51 percent of households headed by an immigrant (legal or illegal) reported that they used at least one welfare program during the year, compared to 30 percent of native households. Welfare in this study includes Medicaid and cash, food, and housing programs …

The MPI study differs sharply from prior estimates issued by advocacy groups, such as the Center for American Progress.

Because of the successful cheap-labor strategy, wages for men have remained flat since 1973, and a growing percentage of the nation’s annual income is shifting to investors and away from employees