The National Oceanic and Atmospheric Administration (NOAA) has yet again been caught exaggerating  ‘global warming’ by fiddling with the raw temperature data.

This time, that data concerns the recent record-breaking cold across the northeastern U.S. which NOAA is trying to erase from history.

If you believe NOAA’s charts, there was nothing particularly unusual about this winter’s cold weather which caused sharks to freeze in the ocean and iguanas to drop out of trees.

Here is NOAA’s January 2018 chart for Northeast U.S. – an area which includes New England along with NY, PA, NJ, DE and MD. 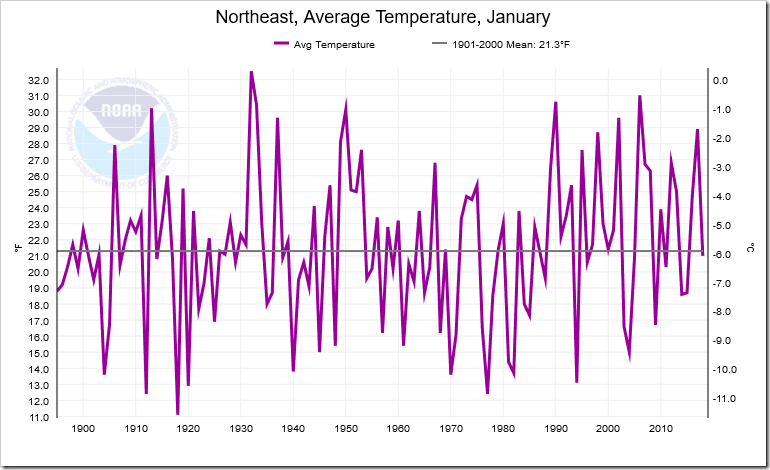 You’d never guess from it that those regions had just experienced record-breaking cold, would you?

We’re not talking fractions of a degree, here. The adjustments amount to a whopping 3.1 degrees F. This takes us well beyond the regions of error margins or innocent mistakes and deep into the realm of fiction and political propaganda.

Homewood first smelt a rat when he examined the New York data sets.

He was particularly puzzled at NOAA’s treatment of the especially cold winter that ravaged New York in 2013/14, which he describes here:

The cold weather really began on Jan 2nd, when an Arctic front descended across much of the country, and extended well into March.

The NWS wrote at the end of the winter:

The winter of 2013-14 finished as one of the coldest winters in recent memory for New York State.  Snowfall across Western and North Central New York was above normal for many areas, and in some locations well above normal. This winter comes on the heels of two previous mild winters, making the cold and snow this winter feel that much harsher.

Temperatures this winter finished below normal every month, and the January through March timeframe finished at least 4 degrees below normal for the two primary climate stations of Western New York (Buffalo and Rochester)…..

Relentless cold continued through the month of January across the region.

So why, he wondered, did NOAA have this marked down as only the 30th coldest winter (since 1895) on its New York State charts, with a mean temperature of 16.9F?

Homewood compared the local records for January 1943 and January 2014 – months which, according to NOAA’s charts, had very similar average temperatures. 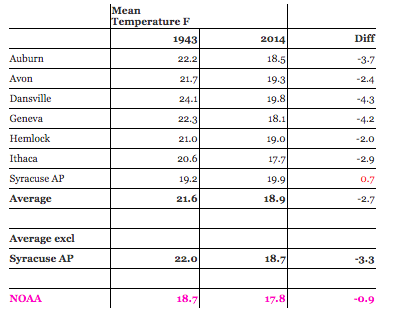 Somehow, NOAA has adjusted past temperatures down, relatively, by 1.8F.

Now, Homewood has given the same treatment to the most recent Big Freeze – the winter of 2017/2018.

Yet again, he has found that NOAA’s arbitrary adjustments tell a lie. They claim that January 2018 was warmer in the New York region than January 1943, when the raw data from local stations tells us this just isn’t true.

Yet NOAA say that the division was 2.1F warmer last month. NOAA’s figure makes last month at least 3.1F warmer in comparison with 1943 than the actual station data warrants.

Clearly NOAA’s highly homogenised and adjusted version of the Central Lakes temperature record bears no resemblance at all the the actual station data.

And if this one division is so badly in error, what confidence can there be that the rest of the US is any better?

Well indeed. The key point here is that while NOAA frequently makes these adjustments to the raw data, it has never offered a convincing explanation as to why they are necessary. Nor yet, how exactly their adjusted data provides a more accurate version of the truth than the original data.

One excuse NOAA’s apologists make is that weather stations are subject to changing environmental conditions. For example, when the station sited at Syracuse in 1929 was located at what was originally just a sparse aerodrome. Since then, however, as Homewood notes, it has grown into a large international airport with two runways servicing two million passengers a year. Its weather station readings therefore will certainly have been corrupted by the Urban Heat Island effect: that is, its temperature readings will have been artificially elevated by the warmth from the surrounding development and aircraft engines.

So you’d think, wouldn’t you, that to compensate for this NOAA would adjust the recent temperatures downwards. Instead, for no obvious reasons, it has adjusted them upwards.

This is a scandal. NOAA’s climate gatekeepers are political activists not honest scientists and the U.S. taxpayer has no business funding their propaganda.