PHOENIX, Arizona – Jim Chilton knows a thing or two about border security in the United States. The multi-generational rancher’s 50,000-acre beef cattle operation stretches along the border between Arizona and Mexico.

Most of that border is marked by a four-strand barbed wire fence that allows for easy entry by slipping beneath it or cutting it to make an open pathway. 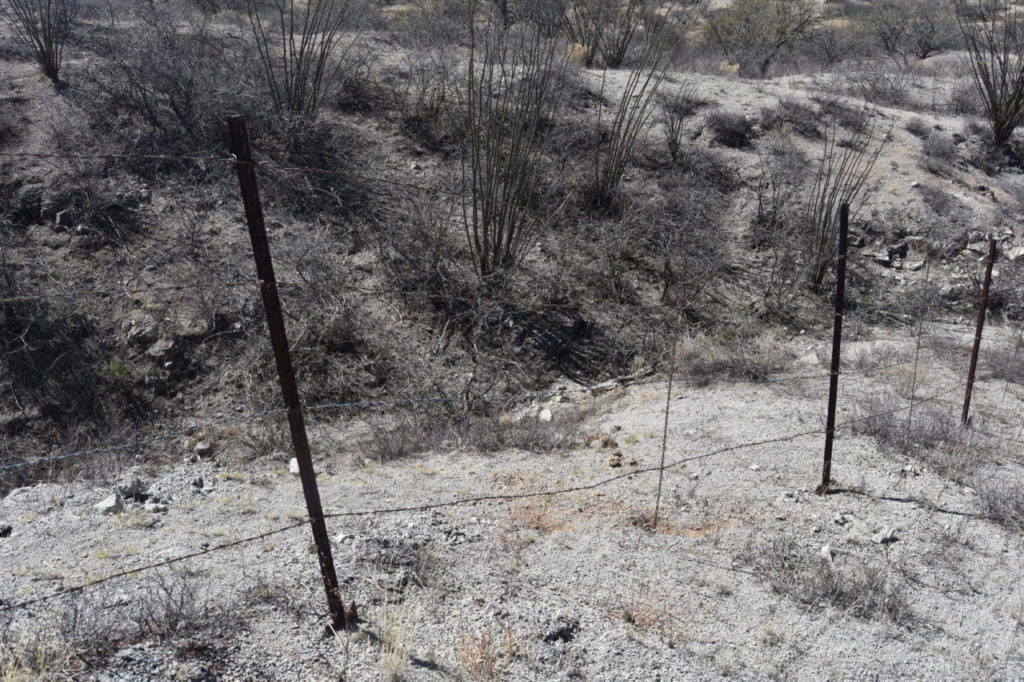 After living on the ranch for 30 years with his wife, Sue, Chilton is on a mission to document how the unsecured border allows drug and human traffickers easy access to the U.S.

“Most of our ranch is occupied by the Sinaloa Cartel,” Chilton told Breitbart News, referring to one of the largest and most brutal drug trafficking operations in Mexico.

Breitbart Texas has reported extensively on cartel operations in Mexico and the United States, including the Sinaloa.

Not only are bad guys bringing drugs, weapons, and people across the border, but cartel scouts are also positioned on mountaintops to alert illegal entrants of the whereabouts of Custom and Border Patrol agents, Chilton added, as Breitbart News has reported.

“The Sinaloa Cartel [is] on our mountains, and they know what we’re doing at all times,” Chilton said.

Chilton’s frustration is not with the border patrol agents who risk their lives along the crime-infested border every day, but with the federal government that doesn’t have a strategy in place to help them actually secure it.

Part of the problem, Chilton said, is the ongoing “defense and depth” strategy the border patrol uses, which involves agents traveling from Tucson halfway to the border for regular patrols.

“The problem is,” Chilton said, “they are not on the border.”

A few years ago Chilton set up three trail cameras along his ranch’s border with Mexico. The video footage he has collected shows a stream of mostly men dressed in camouflage and carrying huge backpacks. (Watch above) 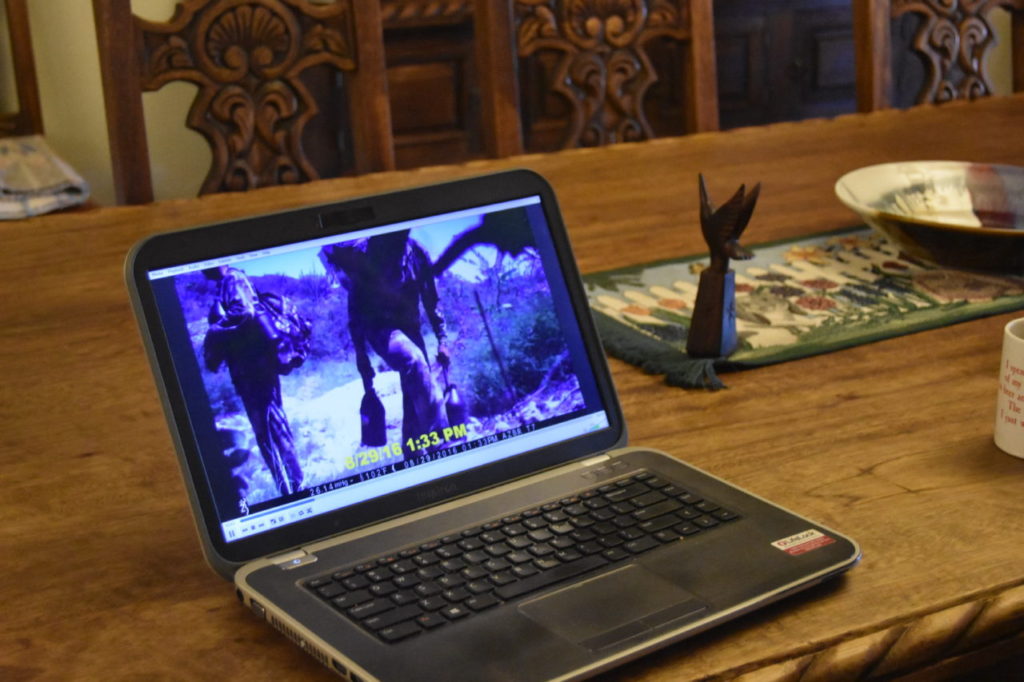 And those backpacks, Chilton said, are not filled with personal belongings.

“It’s marijuana,” Chilton stated, explaining that he and other ranchers in Arizona and other border states have found abandoned backpacks filled with marijuana bails.

In fact, two of his fellow ranchers lost their lives at the hands of drug smugglers, Chilton and other locals believe.

Rob Krentz, 58, was shot, along with his dog, on his border ranch in 2010, and in 2011, Larry Link, 68, was shot and killed on his property at the border of New Mexico and Mexico. The crimes remain unsolved, but those who live in these parts are convinced drug cartels are responsible.

The Associated Press reported in 2012:

Rancher Judy Keeler said she and other area residents believe Link’s murder was likely connected to drug traffickers passing through. She said in recent years neighbors have been victims of break-ins, have seen requests jump for food and water by passing migrants, and at times have been nearly run off county roads by high-speed chases between the Border Patrol and suspected traffickers.

Ranchers and authorities say it’s not uncommon to stumble upon lost bundles of marijuana and wandering traffickers, “drug mules,” as they attempt to make it through the Peloncillo Mountains along the Arizona-New Mexico border.

Aside from marijuana, Chilton has found other evidence of illegal entry, including carpet-bottomed shoe covers, to make tracking crossers more difficult, and clothing left behind by women who have been assaulted. 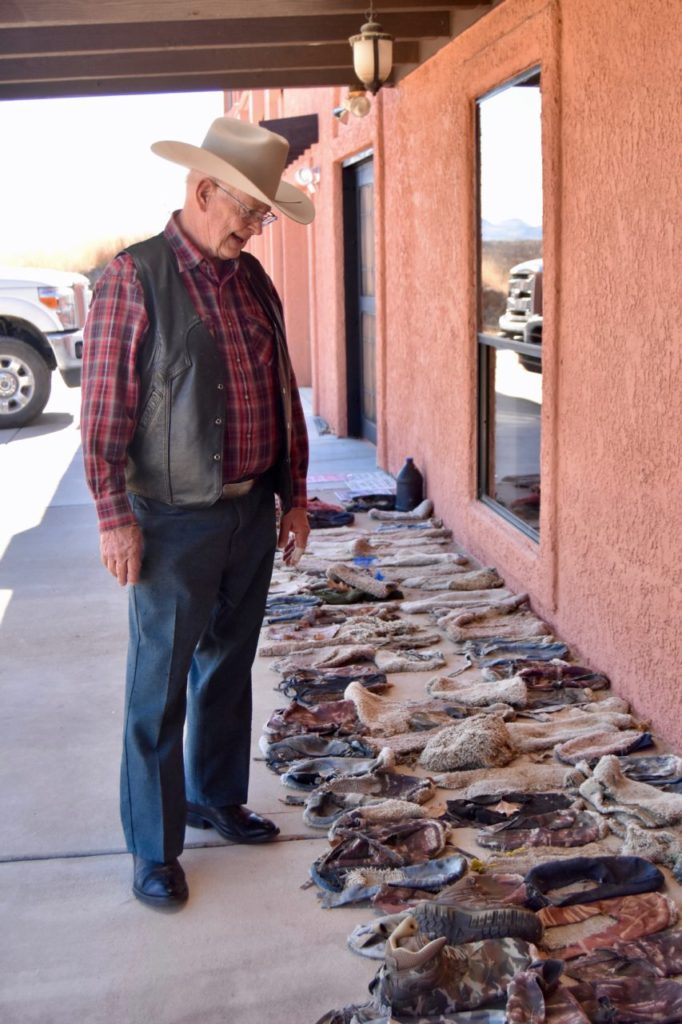 On one part of his ranch, Chilton said he found about 1,000 plastic water bottles painted black, a tactic crossers use to prevent the water from heating up in the sun.

In 2015 and 2016 alone, Chilton said he filmed about 1,000 people streaming across the border, and a steady stream has continued during the ensuing years, with an uptick in crossings recently along what he said are at least 200 trails on the Mexico side that eventually lead to his ranch.

Chilton said the increased crossings could be related to the immigration debate in Washington that led President Donald Trump to propose amnesty for 1.8 million illegal aliens and family members through the DACA program.

“That could have perked interest,” Chilton said, noting that it is also easier to cross over the harsh landscape before the blistering heat of summer sets in.

“When Trump announced that he was going to build a wall, I mean, I was so excited, my socks were rolling up and down,” Chilton said. “I was so enthused, and so, I voted for Trump, and I hope he builds the wall.”

“We need it desperately,” Chilton added.

On Wednesday, President Trump celebrated what he called the “start of our Southern Border WALL” — tweeting photos of a bollard fencing replacement project in Calexico, CA — a project that has been ongoing since February.

Great briefing this afternoon on the start of our Southern Border WALL! pic.twitter.com/pmCNoxxlkH

As Breitbart News’s John Binder reported, the replacement fencing project “was funded in Fiscal Year 2017 and does not include any of the prototype border walls that Trump toured this month.” Furthermore:

Trump’s celebration of the replacement fencing project comes after he signed a spending bill last week that did not include a single provision from his 70-point list of pro-American immigration reforms and went even further by banning him from building a new wall along the southern border using the prototype walls that he toured last month, as Breitbart News reported.

The replacement fencing is not the depiction of a “great” border wall that Trump promised Chilton and other supporters. For example, in the 2016 presidential election, when giving his historic immigration speech in Phoenix, Arizona, Trump announced:

On Thursday, President Trump delivered remarks on his infrastructure initiative, telling the crowd they “have a friend in the White House.”

Editor’s Note: In 2015, Breitbart Texas launched Cartel Chronicles — a series aimed at working with citizen journalists who are willing to report on cartel activity and public corruption in Mexico. The citizen journalists’ reports are published in English and in Spanish. The goal is to help bring attention to the level of violence and corruption along the U.S.-Mexico border. The truth and realities of the region are on full display for citizens of the U.S. and Mexico. Read More.