Breitbart News is hosting a live town hall event—“Masters of the Universe”: Big Tech vs. Free Speech and Privacy—in Louisiana tonight. Breitbart News Editor-in-Chief Alex Marlow will moderate the event, which will begin at 8 p.m. ET.

Watch the live stream of the town hall (#BigTechExposed) here.

The town hall, held at Andrea’s restaurant in Metairie, will feature some of the country’s most influential thinkers in politics, Big Tech, and media, including:

Breitbart News is holding the town hall event a week before Facebook CEO Mark Zuckerberg is scheduled to testify before Congress about various privacy-related issues.

Free Our Internet (freeourinternet.org), a non-profit organization that advocates for free speech and online freedoms for all internet users across the United States, is sponsoring the event. 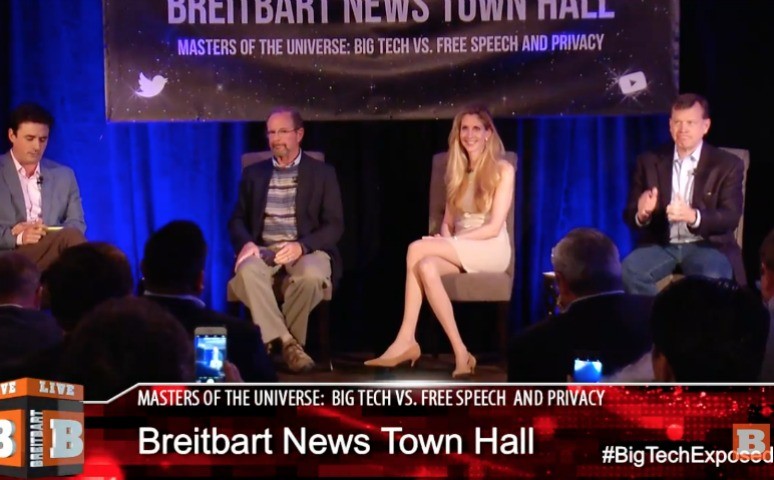 9:27: Questioner asks why the media have been silent about the genocide of white farmers in South Africa. She says she is so glad she got asked this question. Coutler says that nobody under 50 is getting the news from the mainstream media anymore…she says during a recent speech at Boulder, all the questions were about South Africa, Brittany Pettibone… she says the Internet is so important for getting news…and is ecstatic that she has more proof that more people under 50 are not getting news from traditional outlets.

Coulter says if Trump doesn’t act on immigration, that’s going to be the United States in two generations so “get used to it.”

9:25: Schweizer says some suggestions re: regulation have included making Google’s algorithm a public good or “truth in advertising” laws. He says Google has been dishonest about its algorithms for years. Epstein says algorithms by nature are not transparent. He says we have to be very creative in coping with the problem and traditional ways we have dealt with “big bullies” and oligarchs will not cut it this time.

Did you know @gmail copies and stores every email you receive and send, including emails you decide to delete instead of sending! #FreeOurInternet #BigTechExposed pic.twitter.com/aH2DUOVpaq

9:03: Epstein: “Free is not freedom.” He says we have this illusion that everything is okay because we have all of this free stuff and it works so well. Epstein says we don’t know what these companies are doing with our data and then asks how many people in the room use Gmail. He says all Gmails–incoming and outgoing–are all recorded, analyzed. He says every detail is put into your personal profiles–even Gmails in “drafts” that you have erased or decided to not send. 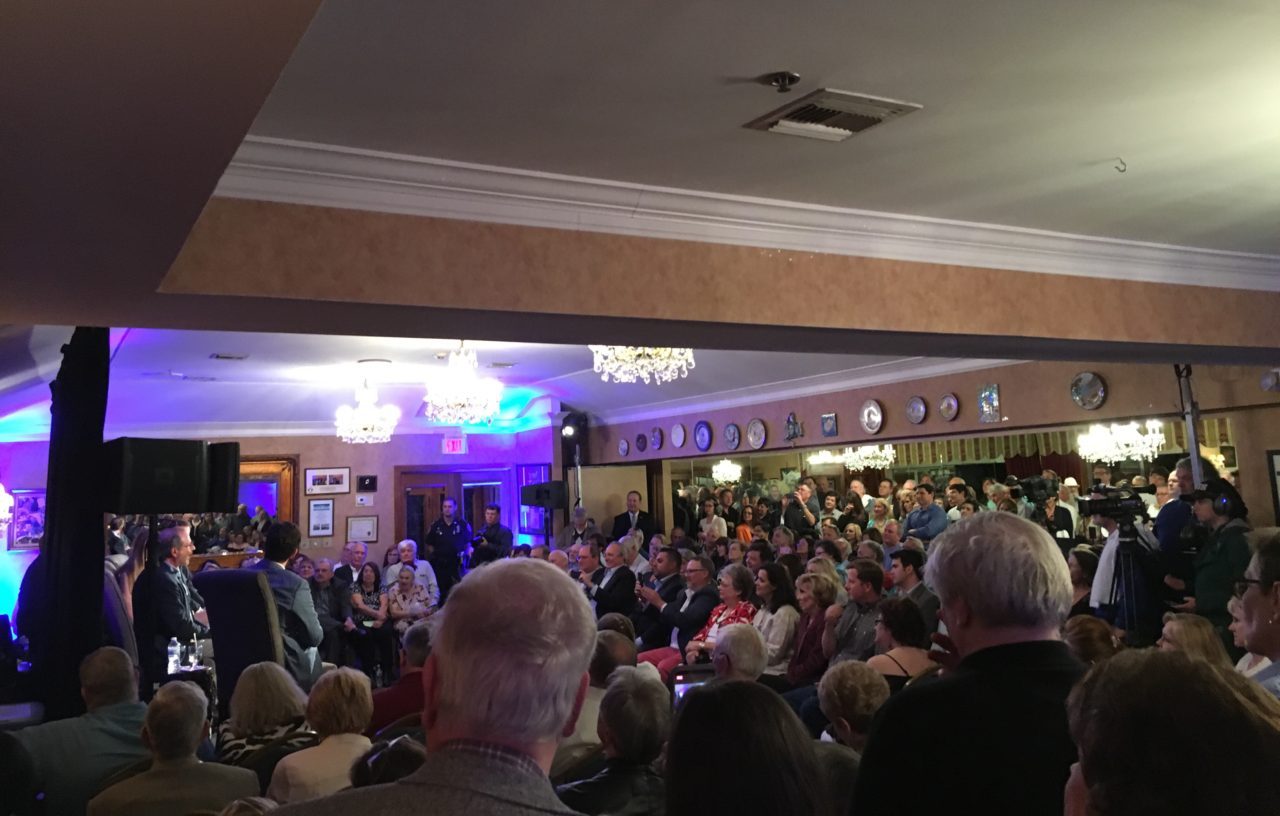 Epstein says all of the major news companies use Google, and he points out that even journalists who are investigating Google are actually sharing all of their work product with Google by using Gmail. Epstein says Breitbart may be the only media source that doesn’t run its email through Google.

A great plug! Epstein says Schweizer has rapidly become one of his favorite people and encourages people to buy his great books.

8:58: Coutler says Big Tech companies held back in 2016 because they could not imagine that Trump could win and now we are going to see what they are capable of. Epstein: “They held back… they will never hold back again.” 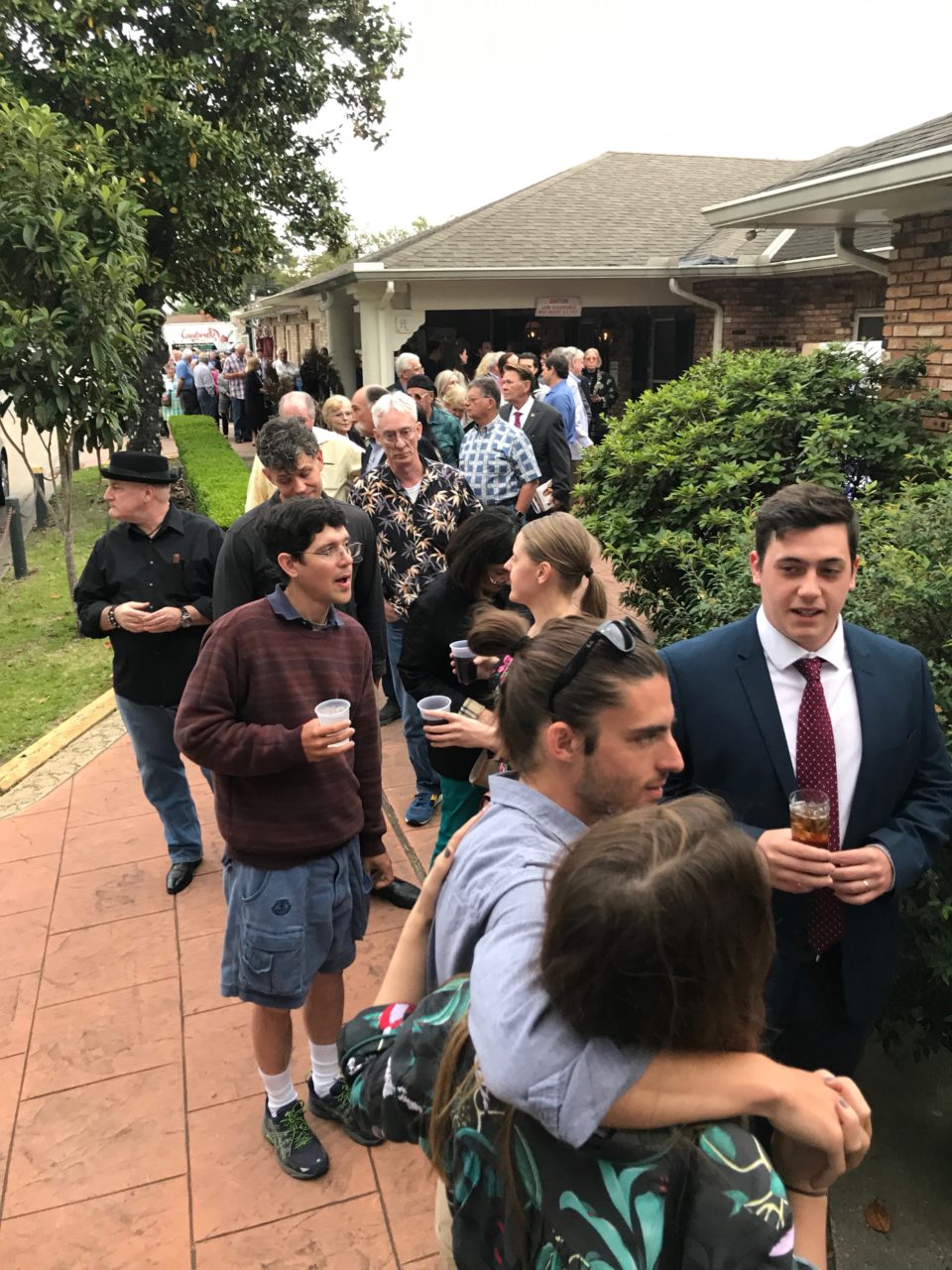 Coulter, in response to a question about whether Google, Facebook needs some competition, says you can’t compete with Google, etc… they are natural monopolies.

8:55:  Marlow cites the biased entries against Breitbart in Wikipedia and points out that Wikipedia is edited by mostly retired leftist academics… he says the definition of Breitbart is basically what a bunch of oligarchs want to define it as. 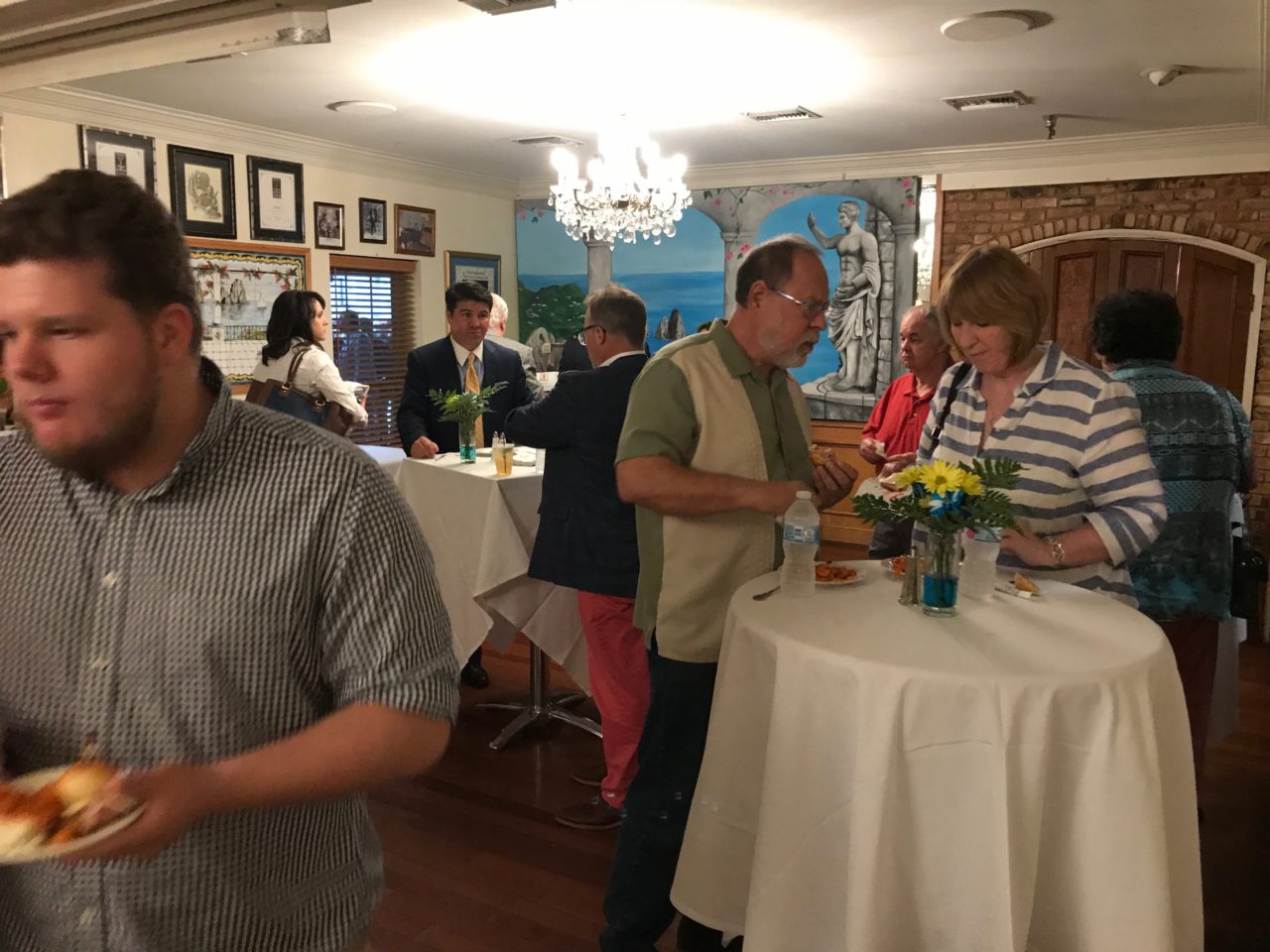 8:51: Schweizer says Americans can determine media bias in five minutes while watching the mainstream media. But with companies like Google, we don’t know what we don’t know because Google makes it seem like they are giving us the best search results, etc. without any agenda when that’s not the case. Schweizer says we need to know what they are feeding the algorithms and what they are feeding us. He says that without that transparency, “we are just flying blind.”

8:50: Schweizer says we always have to keep in mind what Google’s goals and ends are. He says there has always been lurking this “utopian sense of social mission” that Google has. Schweizer says there is no question Google is manipulating us… the question is why. He notes that Google thinks the “perfect search engine” will “resemble mind of God.” Schweizer asks, “what does that mean?” Schweizer says Google wants us to embrace ideas they think are important and suppress certain ideas they disagree with.

8:46: Epstein says the government and the intelligence agencies have been working very closely with the tech firms, and the intelligence community has data about Americans without their knowledge, etc. He says when the government wants to do surveillance, they need court orders and are accountable to us. But when the government teams up with the tech companies, there are no limits and they can just vacuum up all the information they can get their hands on and are not accountable to anybody.

From Boyle: Crowd laughing as Epstein details all the rigged search terms for Hillary Clinton in search engines. 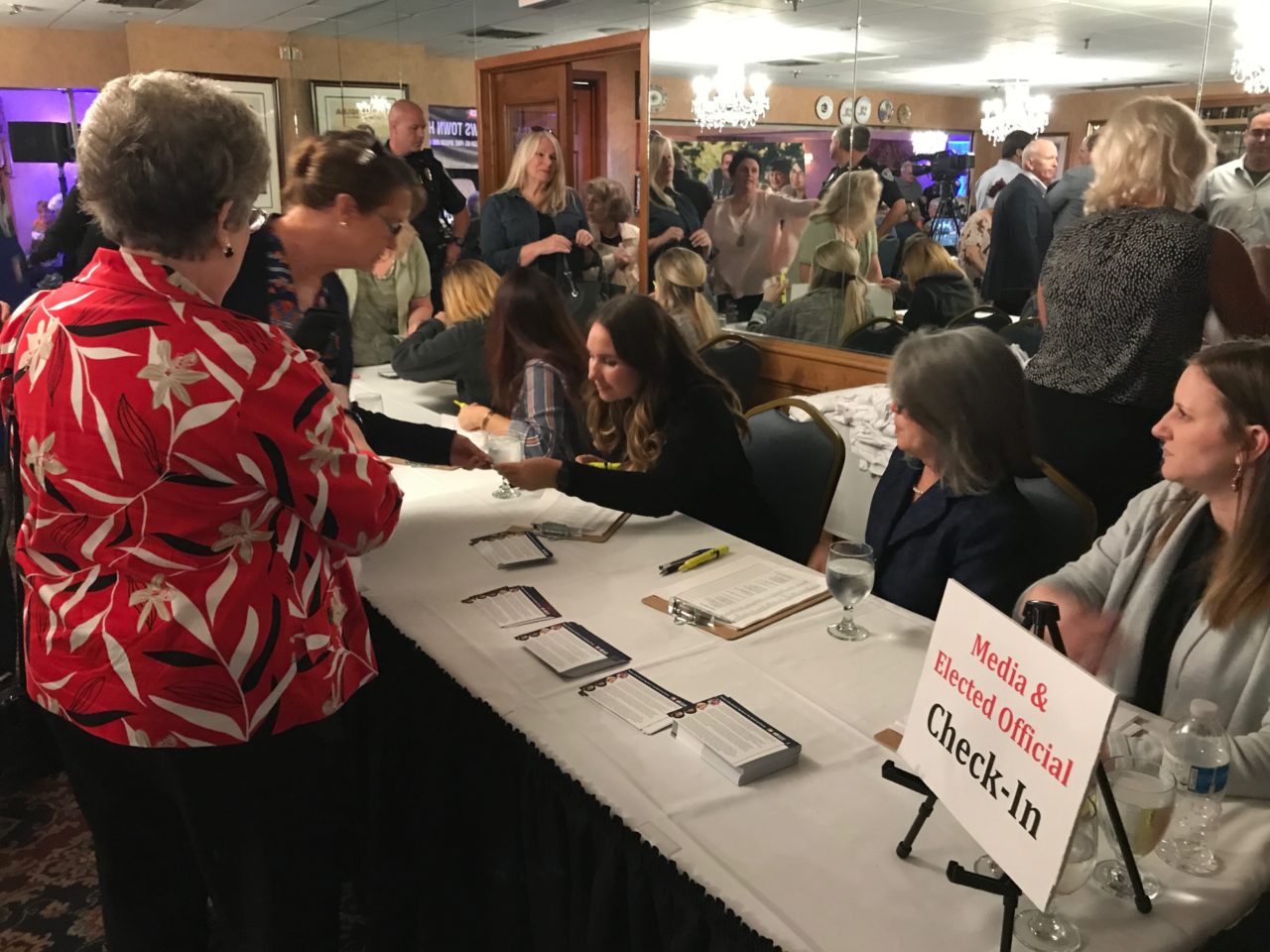 8:38: Coulter emphasizes that she has been fighting the “fake news” that remains the news in the legacy media. She points out the work she did re: the media’s lies about Joe McCarthy with great conservatives Stan Evans and Allan Ryskind at Human Events.

8:35: Marlow says the left invented fake news to shut down the right.

8:32: Schweizer says Google and Facebook have more power than companies have ever had in history. He says they are not just internet companies. They are also media companies, opinion companies… and they steer the national debate in ways that are unimaginable. He says the question is: “What are we going to do about Google and what are we going to do about Facebook? He says it is very encouraging that people are paying attention because Google and Facebook think people are sheep that can be nudged. 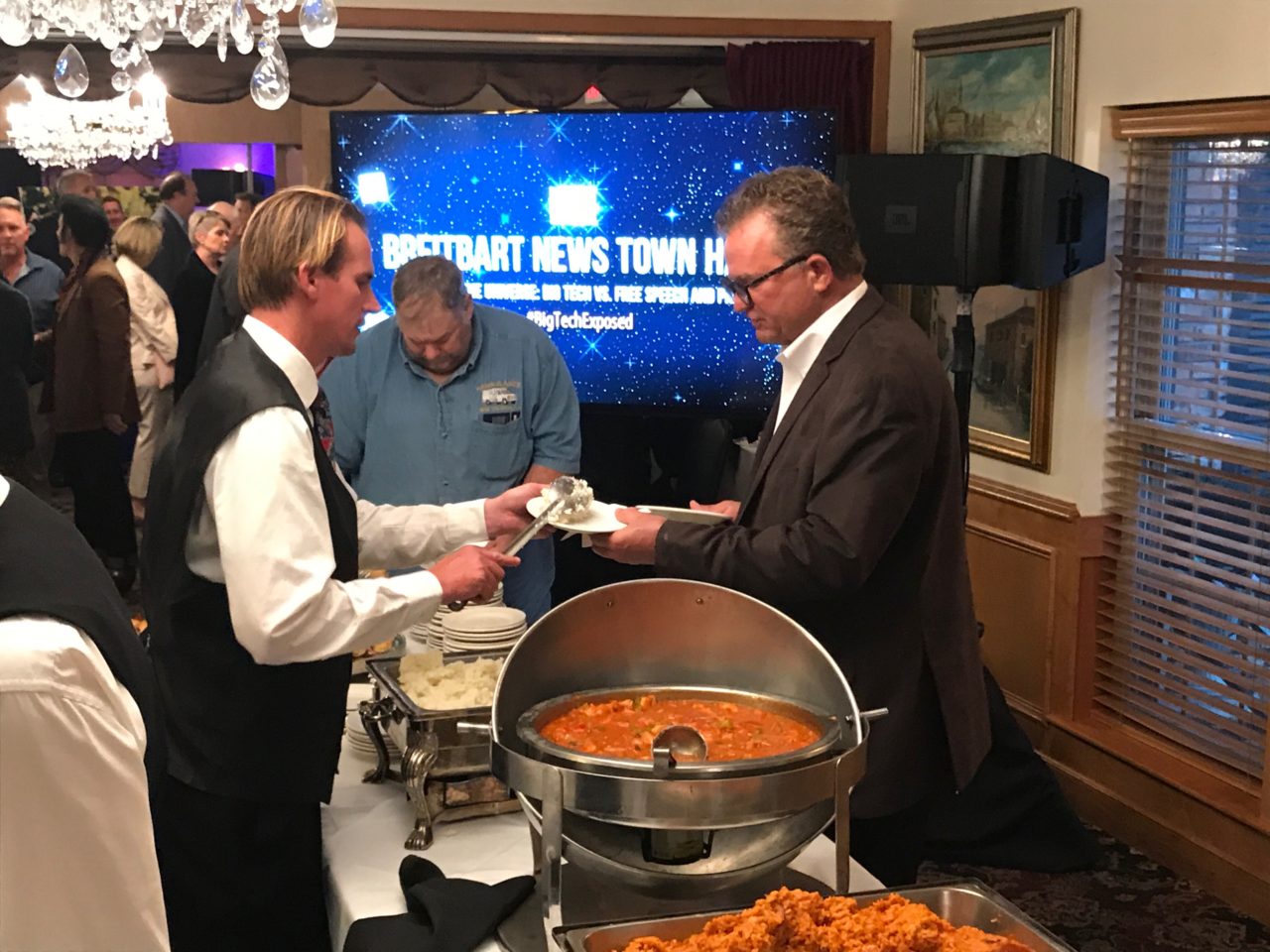 “We don’t know what rules they are applying,” he says.

8:21: Epstein says he is not a conservative, but he’s here because he loves America and freedom. He talks about “shadow banning” on Twitter–Twitter can determine the reach of Ann Coulter’s tweets. Epstein says Google can monitor us when we are online and offline. He explains that Google can use its home device, which it is trying to get into every home,  to always listen and record Americans.

From Boyle: Crowd let out an audible gasp when Robert Epstein informed the audience he is not a conservative.

8:20: Coulter says she has spent much of her life debunking the mainstream media’s fake news–Alger Hiss, race hoaxes, etc.

Coulter points out that she has been worried that she would wake up one day and not be able to go to breitbart.com or the Drudge Report. 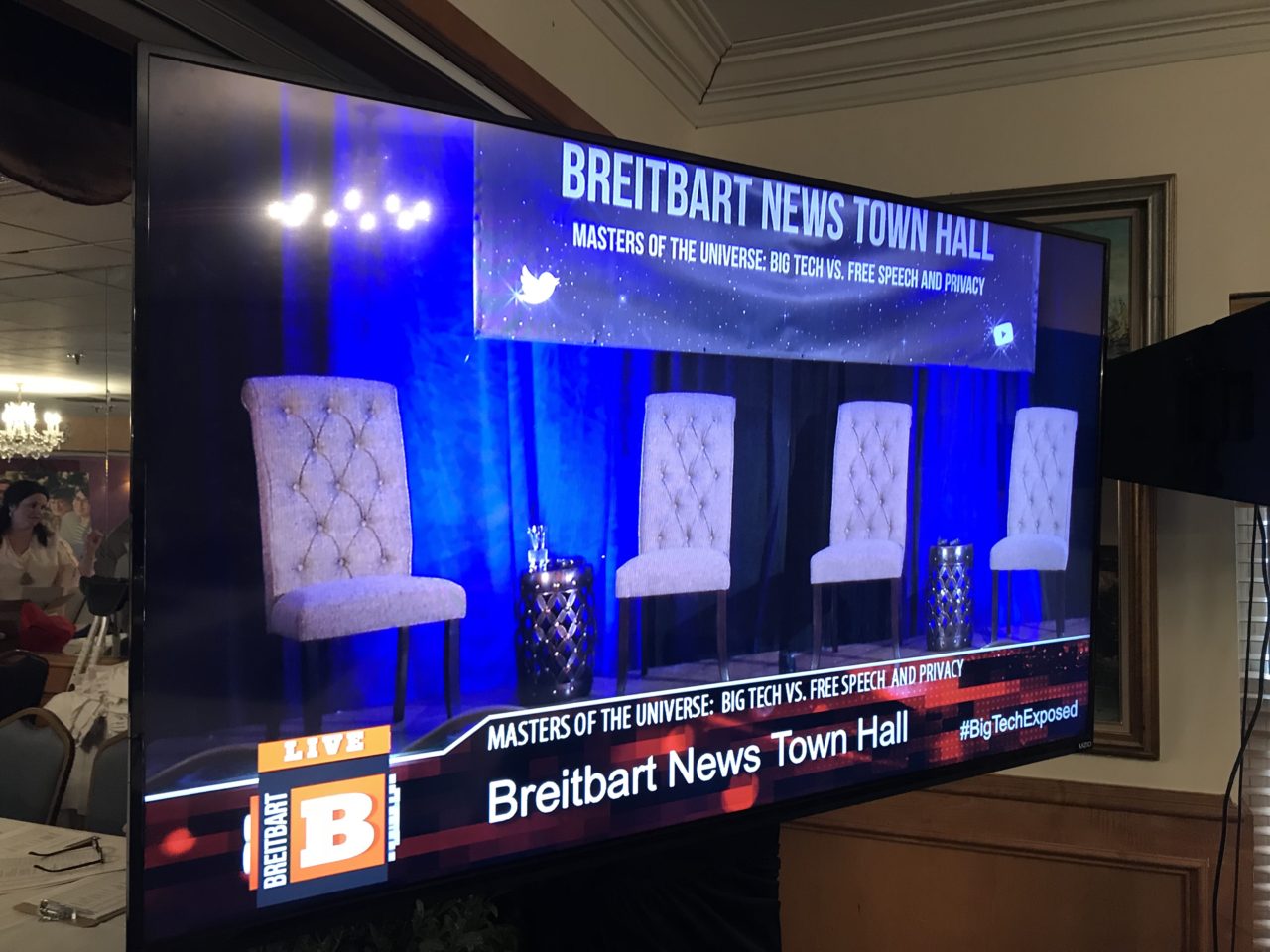 8:14 PM: Breitbart’s Matt Boyle, who is on the ground in Louisiana, says the turnout is more than 1,000 people. From Boyle:

8:13 PM: Marlow asks how many people have sent Facebook or Google any money? Few people raise their hands, and Marlow asks how did these companies make billions of dollars… someone in the crowd yells, “selling our info.” Marlow points out that the users are in fact the product. Marlow says this is the preeminent free speech issue of our times.

Excited to welcome such a great crowd here in Metairie with @BreitbartNews #freeourinternet pic.twitter.com/hLVSneSSI4 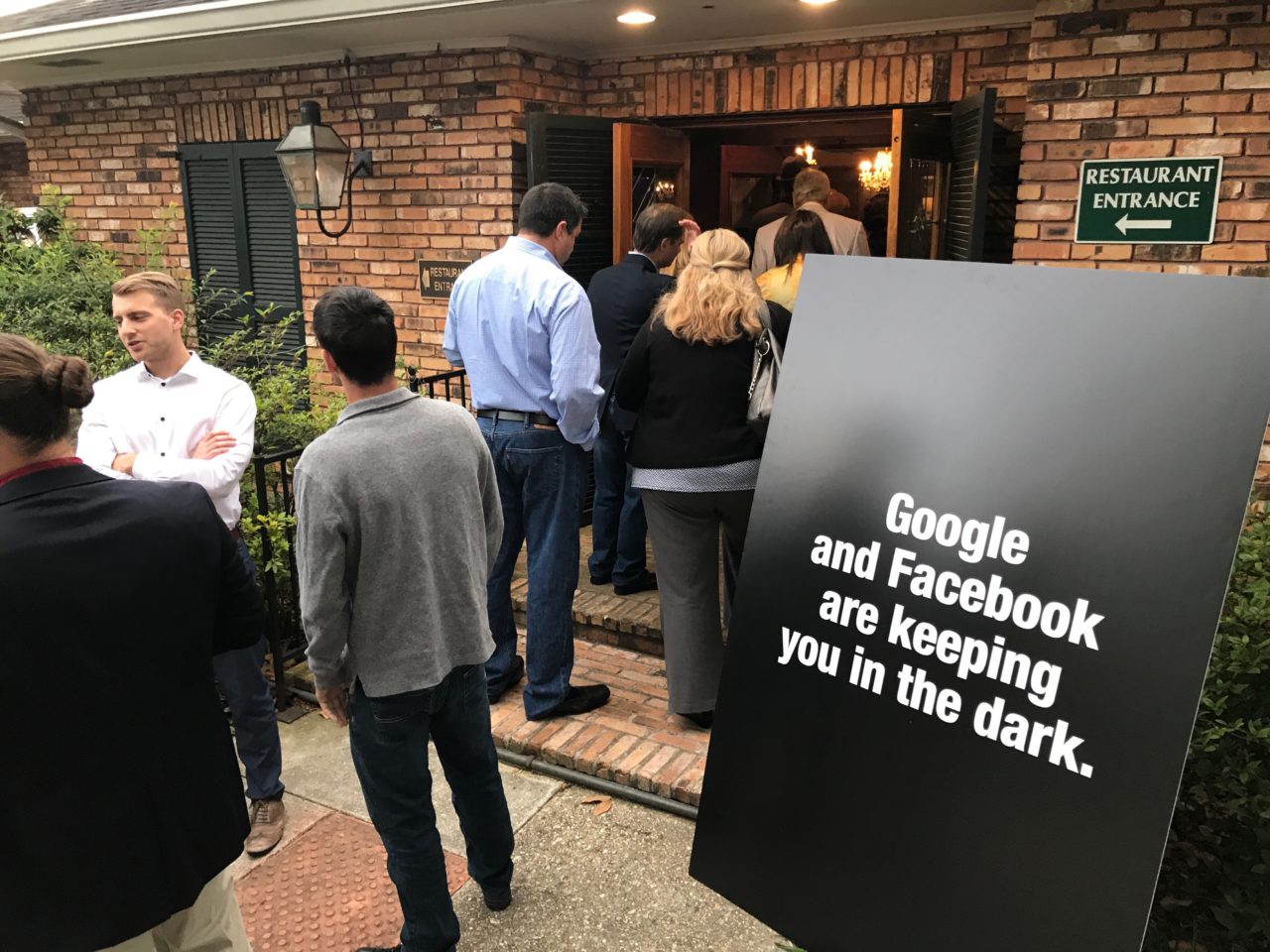 8:11 PM: The town hall is about to get started. Marlow says New Orleans is special to Breitbart News because the late Andrew Breitbart graduated from Tulane University. He says Breitbart used to yell “who dat” at random times. He says he’s very happy to be away from the Swamp. The crowd cheers when he says that Breitbart’s populism is legit.

Packed crowd expected in Louisiana for the town hall event. The line to get in is around the block: 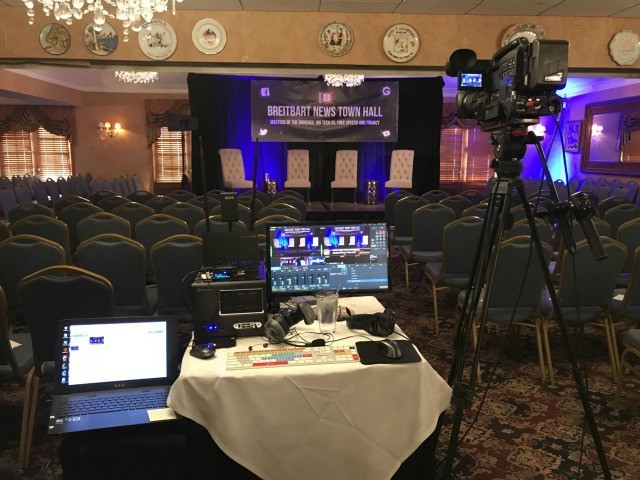 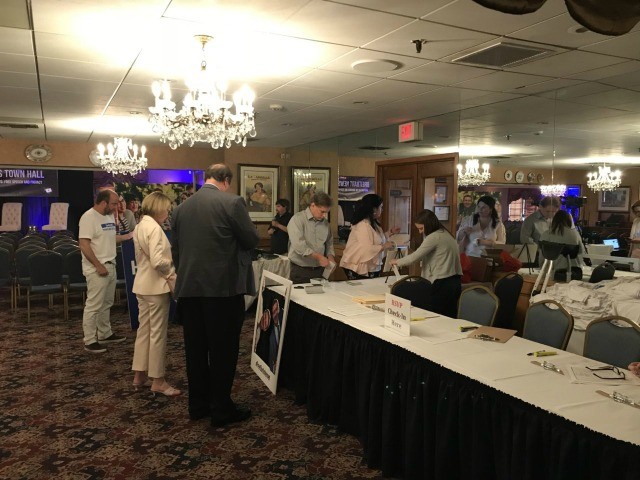 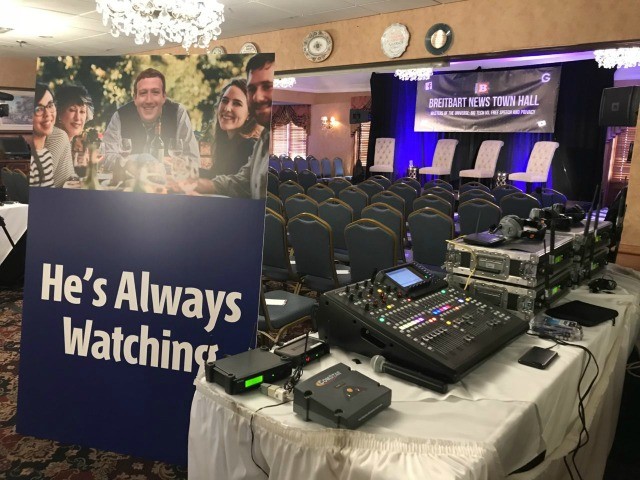 A preview of the town hall event:

Masters of the Universe Town Hall Preview: Robert Epstein Asks ‘Who Made Google the Guardian of the Internet?’
via @lucasnolan_https://t.co/Mh26ODuUiy pic.twitter.com/akxcWVs0IZ