It’s one thing to cry “witch hunt.” It’s another when you find the broomsticks.

In the case of the witch hunt against Republican Missouri Governor Eric Greitens, we at last have the evidence that we knew to be there all along: text messages between Democrats in the Missouri state legislature and the lead witness in the case against him.

Yes, you read that correctly: in a public motion, we learned that the lead witness in the case against him — the so-called “victim” — was conspiring with top Democrats in the Missouri state legislature to bring down the governor. In other words, she wasn’t a victim at all. She was, instead, a tool of the Democratic establishment, a pawn in their efforts to bring down a strong, conservative Republican governor.

Here are the text messages in question:

Text message #1) From Democrat Missouri Representative Stacey Newman to the lead witness in the case (referred to as K.S.): “my House Dem leadership insist you need a lawyer fast.” – Dated January 11th, 2018

Here’s why this matters: News of the Governor’s affair with K.S. broke on January 10th. Rep. Stacey Newman is shown here communicating with the woman at the center of the affair on January 11th, just one day after the news broke.

And not just communicating: coaching. She’s telling the lead witness that Democratic Leadership in the House are involved in the case, and she’s urging her to get a lawyer.

Consider the analogy at the federal level: if Nancy Pelosi and Chuck Schumer were texting with Stormy Daniels in this way, the nation would be aghast and would confirm what we already know — their actions were politics, pure and simple.

That’s what’s taken place in the Greitens’ case. The House Democrats in the Missouri State Legislature have taken a woman who had an affair with a man and coached her into becoming a witness for a crime that never happened. Then, the indictment of that crime was further used to damage the governor’s standing through an investigation in the House of Representatives that never should have taken place.

Text message #2) From Democrat Missouri Representative Stacey Newman to the lead witness in the case (referred to as K.S.): “I may need to talk w your lawyers.” – Dated January 11th, 2018

Now we have the same Rep. Stacey Newman texting the lead witness in the case to talk with her lawyers. This text was sent two hours after the one above.

Again, the federal analogy: if Nancy Pelosi were communicating with Stormy Daniels’ attorney, Republicans of all kinds would be justifiably incensed. Americans would recognize that a politician communicating with a witness in a case of this kind is just plain wrong. Here, that’s what Rep. Newman is doing: she’s speaking personally to the attorney of the lead witness in the case, presumably figuring out how to extract maximum political damage out of a flimsy criminal charge.

This text message is evidence — cold, hard evidence — that the Missouri State Democrats have used the governor’s affair in order to bring investigations, unnecessary media attention, and a legal case. This is evidence that a public official in Missouri was coaching and coaxing the lead witness and her lawyer.

This may be even more damning than the other two text messages. Why? Because this shows a Missouri House Democrat conspiring with a public prosecutor — Democrat St. Louis Circuit Attorney Kim Gardner — in order to coax a witness into bringing a charge.

Let’s review: Missouri House Democrats took the woman who had a willing affair with a governor and brought her to the Circuit Attorney in order to drum up a crime they could charge the governor with.

Then, shortly after this exchange, Democrat Circuit Attorney Kim Gardner brought an indictment against the governor for felony invasion of privacy. It was a flimsy charge with no evidence, no police report, and no victim — at least, no one who had gone to the police and said that she had been wronged. Until politicians starting snooping around this case, the lead witness hadn’t even thought to bring a case!

Again, the federal analogy is helpful: if Bob Mueller and Nancy Pelosi were in cahoots, the entire country would be up in arms. No prosecutor should be discussing with a governor’s or a president’s political opponents the substance and nature of a criminal charge. That’s the stuff of banana republics and tin pot dictatorships, not the United States of America.

Apparently, though, that’s how the legal system works in Missouri. In Missouri, at least according to these text messages, senior level Democrats are able to coach and persuade witnesses to bring false charges. It doesn’t help that Democrat Circuit Attorney Kim Gardner used to serve in the Missouri State House of Representatives. One imagines that it didn’t take long for her old colleagues to coach her on what charge to bring — and who to contact to bring it.

Message #4) Public proof of Rep. Stacey Newman’s contacts with and political allegiance with the lead witness in the Greitens case.

A final thought: Rep. Stacey Newman and the lead witness have a long history. The lead witness contributed to Newman’s campaign in 2008, almost 10 years ago. Rep. Newman invited the lead witness to the floor of the House of Representatives for a Planned Parenthood Rally, praising her for being “a new activist.” She went so far as to introduce and praise her on the House floor and even posted about that interaction in public on Facebook: 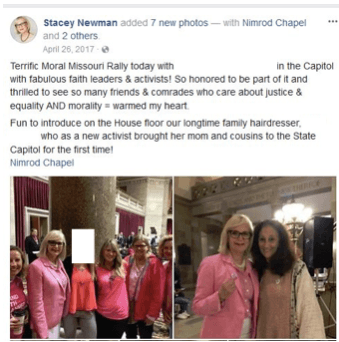 Here’s what Rep. Newman and Missouri Democrats have done: they have used a woman the governor had an affair with as a prop. They have brought charges against him that have no basis, and they have used those charges to launch a House committee investigation that has no reason to exist. Now, they are using the impeachment process to remove the governor from office, a process that started with the admission of an affair and the conspiring of Democrats to embarrass and shame a Republican governor.

This isn’t American. This isn’t right. This isn’t legal. I would urge my fellow conservatives and Republicans to take action in this situation. We must be on guard for these kinds of tactics around the country. The Democrats response to losing election after election is to initiate soft coups, using the media and the legal system to do what they could not do at the ballot box.

To Governor Greitens: I urge you to hold fast. We cannot give in to Democrat scare tactics of this kind. Draining the swamp still leaves the flies. You must beat them back.

Steven B. Hantler is a retired auto industry executive and writer at Breitbart.