Many Americans know that June 6 is the anniversary of World War II’s D-Day, the date when the United States invaded the beaches of Normandy in hopes of saving Europe from Hitler.

But far fewer know that June 6 is also the anniversary of another epic American battle that took place on French soil. One hundred years ago, during World War I, U.S. Marines attacked the German forces at Belleau Wood in order to save Paris and halt the Kaiser’s offensive. June 6, 1918, became the bloodiest day in the Corps’ history to that point, and Belleau Wood became an integral part of Marine lore.

Today, most Americans are blissfully unaware of what happened at Belleau Wood. However, the French citizens who live near the battleground don’t have that luxury. There, the Great War remains forever trapped in time. Cratered shell holes so large they could hold a small house dot the landscape. Ghostly depressions, remnants of trenches where men fought hand to hand to the death with knives, clubs, pistols, and bayonets crisscross the land. Artillery shells, still bearing deadly mustard gas, lie entombed in dense hardwood that swallowed them a century ago.

The story of this critical episode of the Great War is retold in my new bestselling book, The Unknowns: The Untold Story of America’s Unknown Soldier and WWI’s Most Decorated Heroes Who Brought Him Home. Recently released, the book follows eight American heroes who accomplished extraordinary feats in the war’s most important battles. As a result of their amazing bravery, these eight men were selected to serve as Body Bearers at the ceremony where the Unknown Soldier was laid to rest at Arlington Cemetery.

One of those Body Bearers was Gunnery Sergeant Ernest August Janson, a 40-year-old Marine who fought on Hill 142 at the Battle of Belleau Wood. At the time, his comrades in arms knew Janson by a different name: Charles Hoffman. Janson had originally enlisted in the U.S. Army and served for 10 years before going AWOL. When he later wanted to return to military life, he enlisted in the Marines as Charles Hoffman, and he earned a reputation for being an expert rifleman and sharpshooter.

In the spring of 1918, the United States was still in the process of mobilizing its forces and transporting them to Europe. The Russians had just surrendered, freeing the Germans to pull back their forces from the Eastern Front. They saw a narrow window of opportunity to attack and defeat the Allies before the Americans could fully deploy, and they seized it, launching a terrifying series of offensives.

One by one, French towns fell to the Kaiser’s onslaught. By June 1, his army had moved into Belleau Wood, just 40 miles from Paris and the promise of ultimate victory.

But the Germans hadn’t counted on Janson and the other 5th Marines, who had been among the first American troops to arrive in Europe in 1917. Colonel Preston Brown, chief of staff for the U.S. Army 2nd Division, which included the Marines, convinced his Allied counterparts that if anyone could stop the German juggernaut, it was his men. “In 150 years, they have never been beaten,” he said. “They will hold.”

As refugees clogged the roads trying to flee before the coming enemy, the American 2nd and 3rd Divisions rushed toward the front lines. Demoralized, the French army was melting away; soldiers fled the battlefield in disorganized retreat. When they saw the Marine trucks headed for the front lines, many called, “Fini la guerre!” (“The war is finished!”) The Marines paid no attention, continuing their journey into the teeth of the advancing German army.

Upon arrival, the USMC received their orders: “[Take] all necessary steps . . . to hold our present positions at all costs.” They immediately went to work, establishing a twelve-mile defensive line. Using their bayonets as entrenching tools, they dug shallow fighting holes to use for cover in the attack they knew would arrive all too soon.

Meanwhile, the French forces continued to evaporate, leaving holes in the Allied lines. When a French officer urged the Americans to retreat, Captain Lloyd Williams of the 2nd Battalion, 5th Marines responded, “Retreat, Hell! We just got here!”

The German assault began with an artillery barrage. Hundreds of men fell to the gas and explosives, but the Marines refused to fall back. When the German ground troops moved forward, the Americans waited patiently as the enemy waded through the wheat fields near Belleau Wood. When they had approached to within 300 feet, the riflemen opened up, mowing down two lines of Germans. The rest turned and fled.

Having repulsed the Kaiser’s attack, the Americans went on the offensive at dawn on June 6, 1918. As an angry red sun began to peek over the horizon, Janson and the other members of the 49th Company advanced toward the natural fortress that was Belleau Wood. German artillery and machine guns cut through the men mercilessly as they scrambled through the wheat field, killing scores before they could reach the wood.

Janson and the others who made it through the wheat dropped to a crawl in hopes of avoiding the German machine-gun bullets. They slowly toiled their way up the slope designated Hill 142, taking out machine-gun nests along the way. The determined Marines rushed the small groups of Germans, using their bayonets to gut the surprised enemy soldiers. Eventually, the remaining enemy forces began to retreat, leaving the Americans in possession of the hill. Although their numbers had dwindled to just a small fraction of those who had jumped off for the attack that morning, they dug in to await the inevitable counterattack.

When it came, Janson was ready. Having caught sight of more than a dozen Stahlhelm helmets weaving through the underbrush in front of his foxhole, Janson let loose a bloodcurdling scream. All alone, he leapt into the infiltrating column of Germans, who were positioning five machine guns to annihilate the 49th Company. He impaled the belly of the first soldier and twisted the bayonet’s keen blade, eviscerating him. Withdrawing his bayonet, the gunny lunged again, penetrating the torso of the next field-gray-clad soldier.

His war cry alerted the rest of his company who, adding their efforts to Janson’s heroics and baleful bayonet, killed or scattered the column, forcing them to flee and abandon their weapons. Although severely wounded, the Marine veteran saved the 49th and the hill with his daring charge. Had the Germans been able to set up their guns, they would have obliterated the Marines and retaken the hill. 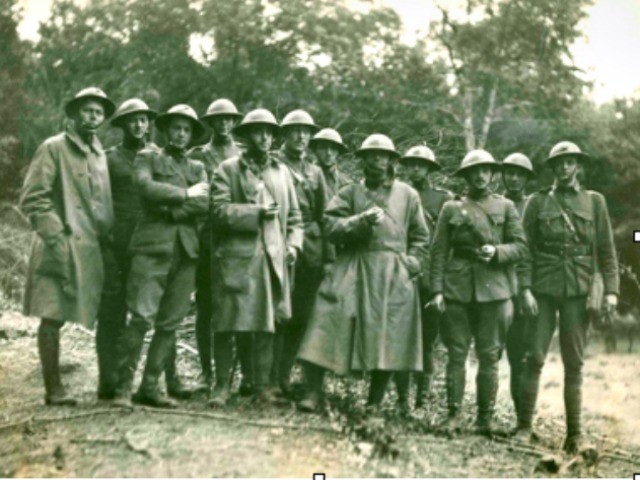 U.S. Marine officers after the battle of Belleau Wood 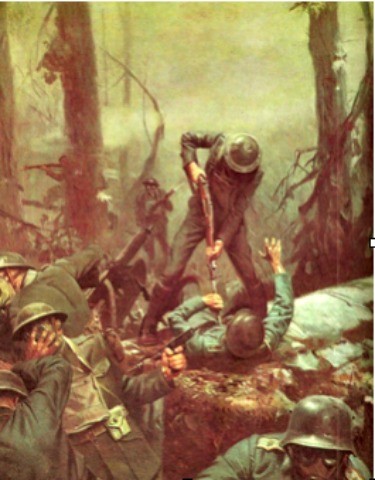 In the face of seemingly insurmountable odds, the Marines had seized and held Hill 142.

But that wasn’t enough for French General Jean Marie Joseph Degoutte, who commanded the Allied forces. He ordered the Marines to attack again and drive the Germans from their entrenched positions in Belleau Wood.

Obeying orders, the Marines advanced in formation, despite the tens of thousands of rounds pouring out of the machine guns trained in their direction. Their reckless determination stunned the German forces. It took several days and wave after wave of attacks, but eventually the Marines sent back a concise report: “Woods now U.S. Marine Corps entirely.”

The Americans’ heroics during the bloody battle would earn them a nickname that they would continue to wear proudly for generations: Devil Dogs.

For his bravery and disregard for his own safety, Body Bearer Gunnery Sergeant Ernest Janson would become the first recipient of the Medal of Honor among the American Expeditionary Forces in France.

On both sides of the war, the Battle of Belleau Wood quickly became the stuff of legend. American censorship of press reports from World War I was ruthless and invariably eliminated all mention of specific units and where they might have fought. However, before the charge began, a journalist named Floyd Gibbons had written a sensational piece glorifying the Marines for their action at Belleau Wood. When the censor heard that Gibbons was believed dead, he let the story go through, and for the first time, Americans at home read effusive praise about a particular unit. “The Marines are fighting like Trojans and have no desire for sleep,” the story claimed. “Their French comrades say they showed the greatest skill and accuracy while under fire.”

The public ate it up. Other newspapers picked up the article, and it went viral. Suddenly, everyone wanted to be a Marine, and tens of thousands of young men poured into recruiting stations. It also struck fear into the hearts of the Central Powers, causing them to rush some of their most elite units to the front. But the Marines and Army units held firm, and Belleau Wood became a turning point of the war.

While not every detail in Gibbons’ story was completely accurate, the American Marines had, in fact, halted the German drive toward Paris. In thanks, the French built a monument at the site of the battle, and they continue to honor the graves of the fallen in the nearby cemetery.

When French President Emmanuel Macron visited the White House in April, he brought with him a sapling from Belleau Wood. It was a symbol that the French people have not forgotten the debt they owe to the American troops who fought and died in World War I. On this hundredth anniversary of their sacrifice, Americans would do well to remember and honor the World War I Marines and members of the U.S. Army who laid down their lives to defend our European Allies.

Patrick K. O’Donnell is a bestselling, critically acclaimed military historian and an expert on elite units. He is the author of eleven books. The Unknowns is his newest, which will be released on May 1. O’Donnell served as a combat historian in a Marine rifle platoon during the Battle of Fallujah and speaks often on espionage, special operations, and counterinsurgency. He has provided historical consulting for DreamWorks’ award-winning miniseries Band of Brothers and for documentaries produced by the BBC, the History Channel, and Discovery. PatrickkODonnell.com @combathistorian