This July marks the 100th anniversary of the Battle of Vaux, a small but tactically brilliant fight that helped lead to Allied victory in the Great War.

Critical to the defense of Paris, Vaux bisected the Paris-Metz road that led to the French capital. But it was in the hands of the Germans.

On the heels of the bloody Battle of Belleau Wood, Allied commanders decided to launch an assault on the French town and take it back from the enemy.

The story of the battle is retold in my new best-selling book, The Unknowns: The Untold Story of America’s Unknown Soldier and WWI’s Most Decorated Heroes Who Brought Him Home. Recently released, The Unknowns follows eight American heroes who accomplished extraordinary feats in some of the war’s most important battles. As a result of their bravery, these eight men were selected to serve as Body Bearers at the ceremony where the Unknown Soldier was laid to rest at Arlington Cemetery.

The Unknowns also recounts the war experiences of Edward Younger, the man who selected the body that became the Unknown Soldier. In early July, he was at Vaux, watching as American and French artillery hammered the town with gas and high-explosive shells.

The Americans had learned some lessons from Belleau Wood and other battles with the Germans. One of the most important was the need for artillery support on an infantry assault. At Vaux, they put that lesson to good use. One of Younger’s comrades from the 9th Infantry Regiment recalled, “We saw the systematic destruction of the part of Vaux across the creek or river that divided the American and German troops. In the first thirty minutes of the barrage every house was blown down, and by the time the troops made their attack there was no place to hide.”

Earlier battles had also taught the Allies about the importance of intelligence. In planning for the assault on Vaux, they relied heavily on information provided by a stonemason who had worked on nearly every building in town. They supplemented his knowledge with additional details gleaned from German prisoners of war. Putting it all together, they had a detailed understanding of the enemy strongpoints and where they needed to concentrate their fire.

Earlier battles also spurred the Americans to rely on a brand new intelligence-gathering tool: air power. At Belleau Wood, German planes and air balloons performed continual reconnaissance throughout the battle, as well as shooting down any Allied aircraft that tried to enter the fight.

At Vaux, the Allies turned the tables. For the first time ever, the Americans coordinated their planes and infantry movements in an air-to-ground battle. It was an unmitigated success. The Americans maintained air superiority throughout the engagement, effectively barring the Germans from the skies.

Younger’s 9th Infantry jumped off at 6:00 p.m. and fought its way through the few defenses of the town that had withstood the shelling. By 7:00 p.m., they took control of Vaux. Skirmishing continued for a while, but the Americans quickly overwhelmed the enemy soldiers who continued fighting.

Despite the artillery and intelligence, the fighting was still intense. Edward Younger received multiple gunshot wounds to his head, neck, and left arm but miraculously made a full recovery and returned to fight again within weeks. It would not be the last time.

In recognition of his sacrifice, Younger received a Wound Stripe, the predecessor to the Purple Heart. The decoration had originally been given to at least three men by General George Washington, but it had fallen out of use until being resurrected in World War I.

Scores of other soldier received Wound Chevrons for their heroism that day. One was Private Earl D. Norton, who was later honored with both the chevron and the Distinguished Service Cross. His citation reads:

“While Private Norton, an automatic rifle gunner, was advancing during the attack, a shell fragment struck a bag of hand grenades which he was carrying on his hip, resulting in an explosion which shattered his left leg. Despite this severe wound, he crawled forward toward a shell hole, where the remainder of his squad had taken refuge and, with his remaining strength, threw his automatic rifle to the men in the shell hole. His injuries necessitated the amputation of his leg.” 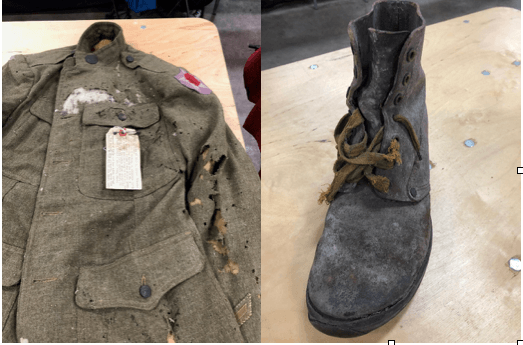 The moth-eaten uniform and sole remaining shoe of Private Earl Norton. Both were recently found, along with Norton’s helmet and gas mask, at a New England flea market. Author photo.

In all, 46 Americans gave their lives at Vaux, and 270 were dead or wounded. They killed 250 German soldiers, wounded 160, and took more than 500 prisoners. Pershing called it “a brilliantly executed operation,” but those on the ground would live with their scars from the encounter forever.

Patrick K. O’Donnell is a bestselling, critically acclaimed military historian and an expert on elite units. He is the author of eleven books. The Unknowns is his newest, and it is featured on the new release table in Barnes & Noble stores. O’Donnell served as a combat historian in a Marine rifle platoon during the Battle of Fallujah and speaks often on espionage, special operations, and counterinsurgency. He has provided historical consulting for DreamWorks’ award-winning miniseries Band of Brothers and for documentaries produced by the BBC, the History Channel, and Discovery. PatrickkODonnell.com @combathistorian