The Washington Post prominently recognized that Mollie Tibbett’s alleged murderer is an illegal alien, but the New York Times buried the politically inconvenient fact in the body of its article.

“Body Believed to Be That of Mollie Tibbetts, Iowa College Student, Is Found,” the New York Times’ headline said, above the lede which suggested the identity of the alleged killer was a local American:

A body believed to be that of Mollie Tibbetts, a 20-year-old student at the University of Iowa who vanished a month ago after going for a jog, was found on Tuesday morning, investigators announced. A 24-year-old resident of rural Poweshiek County has been charged with first-degree murder in the killing.

The lede was later updated:

A body believed to be that of Mollie Tibbetts, a 20-year-old student at the University of Iowa who vanished a month ago after going for a jog, was found on Tuesday morning, investigators announced. A 24-year-old undocumented immigrant has been charged with first-degree murder in the killing.

An earlier version of the New York Times article hid the illegal alien’s status in the body of the article, in the fourth paragraph.

In contrast, the Washington Post recognized the importance of the killer’s identity, headlining its article with:

Law enforcement officials in Iowa have charged a man with murdering 20-year-old college student Mollie Tibbets, saying he admitted to pursuing her as she ran on a country road and eventually led them to the field where a body that they believe to be hers was buried under corn stalks.

The suspect was identified as 24-year-old Cristhian Bahena Rivera, who authorities said was an undocumented immigrant from Mexico who had been living in the United States for at least four years.

But both outlets downplayed and buried the news under dramatic headlines about President Donald Trump’s former campaign manager and lawyer, Paul Manafort and Michael Cohen. 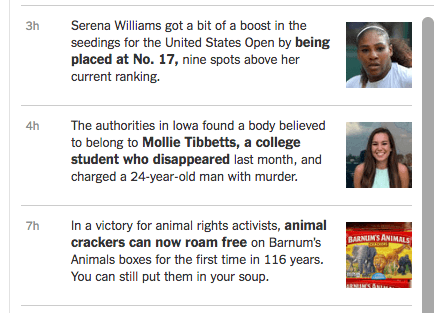 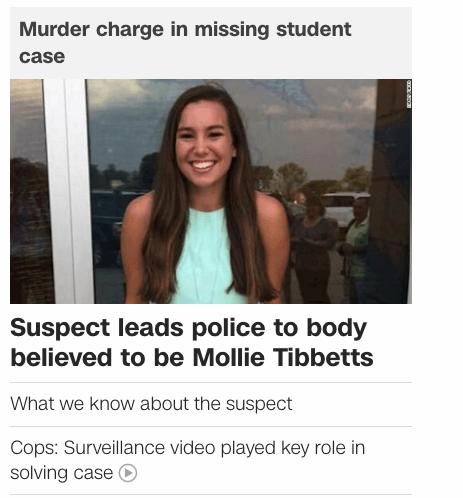 CNN included the alleged killer’s identity in the first paragraph, but buried the drama under passive-voice lede:

(CNN) The weekslong search for Mollie Tibbetts, a 20-year-old Iowa student who disappeared while jogging, came to a grisly end Tuesday when an undocumented immigrant guided investigators to a body in a cornfield.

While authorities have yet to confirm the body is Tibbetts, they arrested Cristhian Bahena Rivera, 24, on first-degree murder charges. 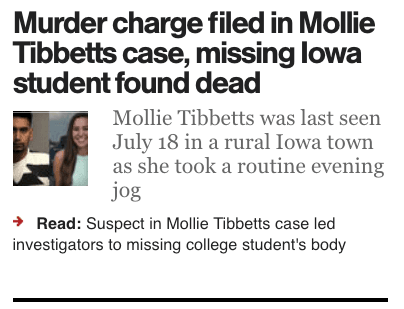 The alleged killer’s status was relegated by CBS to the second paragraph:

Officials say the suspect, 24-year-old Cristhian Bahena Rivera, is a Mexican national who is in the country illegally. Investigators believe Rivera followed Tibbetts on July 18 and abducted her as she was out for a jog. 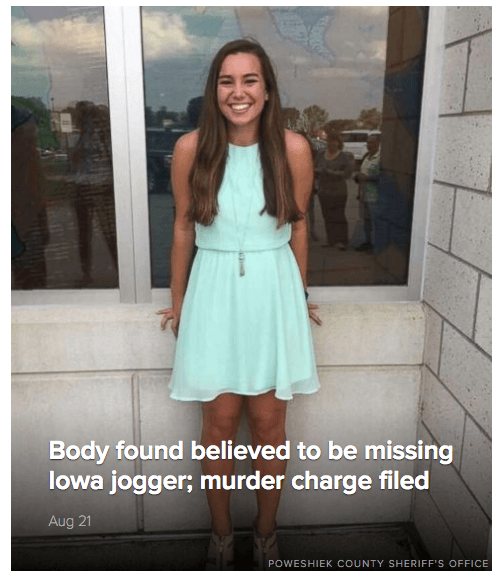 A first-degree murder charge was filed on Tuesday against a young man in the case of missing Iowa jogger Mollie Tibbetts, state officials said Tuesday.

The second paragraph, however, showed the alleged attacker’s identity:

The suspect, 24-year-old Cristhian Rivera, is an undocumented immigrant who lives in the rural area where the college student vanished one month ago, according to Rick Rahn of the Iowa Division of Criminal Investigation.

NBC News performed best, by putting the illegal-alien status in the headline: 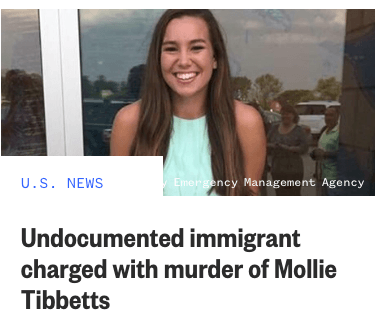 NBC also put the information at the beginning of the lede:

An undocumented immigrant has been charged with the murder of a University of Iowa college student who was last seen during an evening jog over a month ago, authorities said on Tuesday.