Federal data shows that legal immigrants are filling a growing share of several white-collar professions which have seen little salary growth since 2000.

The data was posted by the Center for Immigration Studies, and it shows how Congress imports foreign-born immigrants and visa-workers to raise the labor supply by roughly 50 percent in several white-collar science and technology jobs, ensuring much lower salaries for Americans in those flooded job markets.

The CIS study looked at the percentage of foreign-born workers in 474 separate occupations defined by the Department of Commerce.  The group reported:

There are 65 occupations in which 25 percent or more of the workers are immigrants (legal and illegal). In these high-immigrant occupations, there are still 16.5 million natives — accounting for one out of eight natives in the labor force…

The loss of wages and status is obvious in the jobs where migrants have doubled or nearly doubled the supply of labor. For example, legal and illegal migrants hold a slight majority of jobs in blue-collar agricultural sorting, construction plasterers, sewing-machine operators, tailors, and miscellaneous agricultural workers. Immigrants also comprise 40 percent or more of eight additional jobs as maids, textile workers, taxi drivers, translators, roofers, and painters.

But the government-delivered flood of new labor has reached up to many once-prestigious high-tech white-collar jobs that were widely seen as a hard-earned pathway to a prosperous and secure future.

These are huge inflows. For example, if 33 percent of people in a career are immigrants, then the government has raised the labor supply in that career by 50 percent.

Those percentages are likely to increase further if Congress approves the HR 392 proposal by GOP Rep. Kevin Yoder to lift the “country caps” on employer-sponsored immigrants, or implements donor demands for more visa-workers, or if President Donald Trump drops his Four Pillars immigration reform plan or quits his regulatory efforts to shrink the visa-worker programs.

In February 2018, an alliance of Democrats and business-first Republicans — backed by business groups — blocked Trump’s Four Pillars pro-American reform in the Senate. 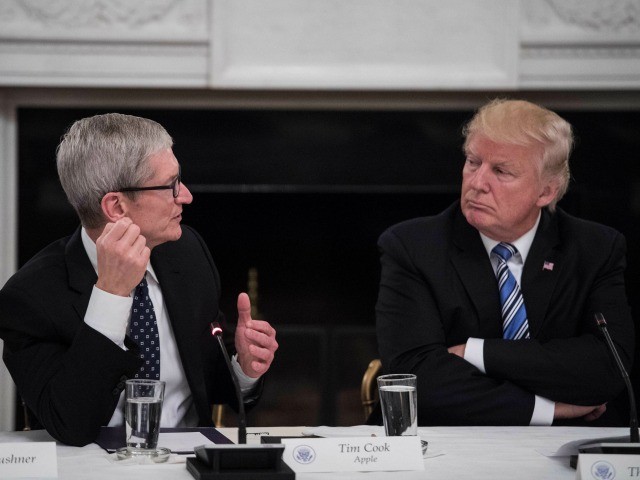 US President Donald Trump listens to Apple CEO Tim Cook speak during an American Technology Council roundtable at the White House in Washington, DC, on June 19, 2017.

The high inflow of extra workers ensured by Congress has a large impact on wages, according to Economics 1o1 calculations. For example, the 2016 report on immigration by the National Academy of Sciences reported that Americans lose 5.2 percent of their wages and salaries when the government uses immigrants to raise the labor supply by 16.5 percent.

The lost 5.2 percent of income does not go to immigrants or disappear into the air — it is transferred to employers and investors in the form of almost $500 billion in extra profits per year. Those transfers supercharge New York’s stock market.

One of the academics serving on the NAS group, George Borjas of Harvard, used his blog to translate the academies’ overly complex description of the immigration tax:

The calculation of the immigration surplus reported in Chapter 4 of the NAS report assumes that GDP is $17.5 trillion; that 65% of GDP goes to workers; and that 16.5% percent of the workforce is foreign-born. The report also says that “the current stock of immigrants lowered wages by 5.2 percent.”

If we look at the impact of immigration over the last few decades in the U.S., one rough rule of thumb that comes out is that when you increase supply of workers in a particular group by around 10 percent, the wage of that group will go down by three percent, which is not a trivial number but it’s not a huge number either

Legal immigrants are equally impacted by this government-arranged transfer because they work under similar economic pressure as Americans. They gain by moving to the United States but lose when the government moves another cohort of immigrants into their sector.

Overall, salaries for technology jobs have barely kept ahead of pre-inflation average salaries nationwide over the last decade, according to Payscale: 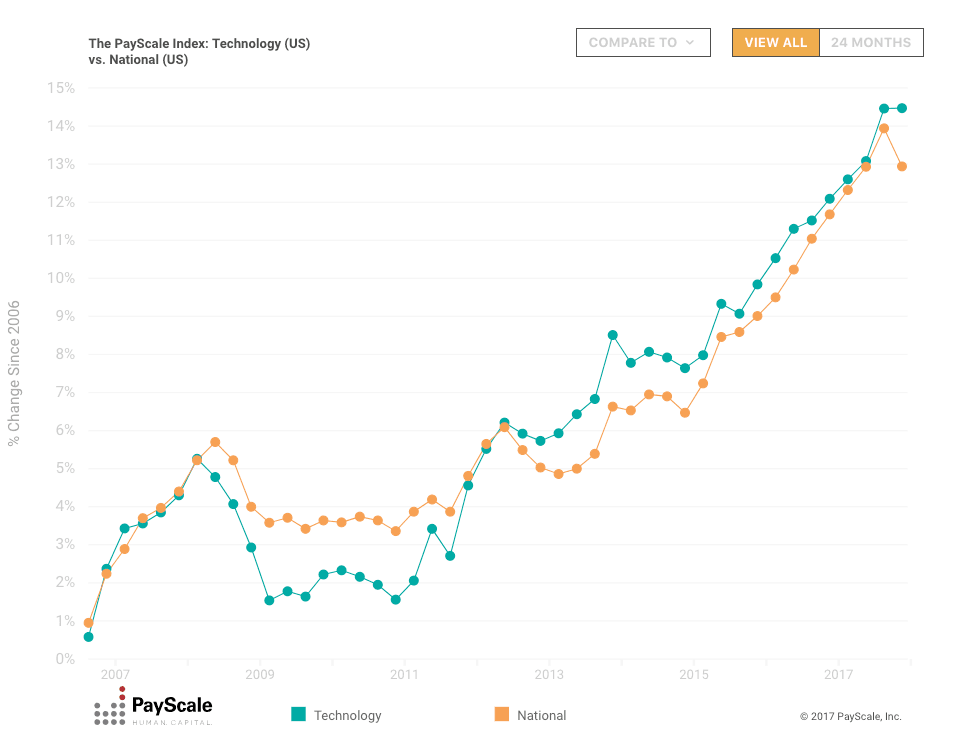 But the government data provided by CIS shows that many culture-intensive jobs have largely escaped the diversity that many progressives promote for others.

Nonetheless, the rising inflow of immigrants is also beginning to flood into many of these culture-related jobs.

Fourteen percent of therapists are immigrants.

Twenty percent of pharmacists and 22 percent of teachers are immigrants.

Overall, the Washington-imposed economic policy of economic growth via immigration shifts wealth from young people towards older people by flooding the market with cheap foreign labor.

That process spikes profits and Wall Street values by cutting salaries for manual and skilled labor offered by blue-collar and white-collar employees. The policy also drives up real estate prices, widens wealth-gaps, reduces high-tech investment, increases state and local tax burdens, hurts kids’ schools and college education, pushes Americans away from high-tech careers, and sidelines at least 5 million marginalized Americans and their families, including many who are now struggling with opioid addictions. Immigration also pulls investment and wealth away from heartland states because investment flows towards the large immigrant populations living in the coastal states.

Got any tips about the H-1B, L-1 and OPT programs?  Email Neil Munro here or at NMunro@Breitbart.com.