The Congressional Leadership Fund, the super PAC endorsed by the House Republican leadership, announced on Saturday that they held their fourth “Super Saturday” to reach a record number of Republican voters across the nation. CLF is using its 40 field offices to engage with over 500,000 targeted voters in key congressional districts needed to hold the Republican majority.

Compared to other super PACs, CLF has decided to build its grassroots army, rather than use most of its money solely on television and digital ads. Not only are CLF’s grassroots  efforts building up Republican voter engagement, but they are also building up a Republican network which it can use for future elections beyond the 2018 midterms.

The CLF is empowering its 5,500 grassroots volunteers to engage in door-to-door canvassing and phone banking and to build a Republican grassroots army across the nation.

Corry Bliss, the CLF executive director, said in a statement on Saturday, “In February of 2017, CLF launched a hyper-targeted and data-driven field program that has grown to 40 field offices nationwide and resulted in over 24 million voter contacts to date.”

“With less than 40 days until Election Day, CLF is hosting its fourth Super Saturday, contacting 500,000 targeted voters in key congressional districts to inform them how their member of Congress is working for them,” Bliss added. “CLF’s unprecedented field program has proven to be a major factor this election cycle, and we will continue to increase our efforts as Election Day nears.”

Since February 2017, CLF opened 40 field offices and made over 24 million voter contacts to date. Each CLF office has a full-time staffer and hundreds of interns and volunteers who engage on a daily basis through hyper-targeted phone banking and door-to-door grassroots activism.

On July 28, CLF held its third Super Saturday and surpassed its goal of 400,000 voters contacts in more than 30 field offices nationwide. This past Saturday was the group’s fourth Super Saturday.

Republicans will attempt to defy history this November and hold the House majority. Historically, a president’s party typically loses significant Congressional seats in non-presidential election years. Republicans gained a historic 64 seats in 2010 when Barack Obama was in office, while Democrats took 32 seats in 2006 during George W. Bush’s second term in office.

The Democrats need to win 23 Seats to win the House majority, which would only give them a slim majority of 218 to 217 seats. Republicans have used their legislative victories such as the Tax Cuts and Jobs Act, as well repealing Obamacare’s individual mandate, and the skyrocketing economy to bolster their midterm message.

To combat these the historical trends, CLF has invested significantly in its grassroots and digital operations.

CLF invested over 30 percent of its budget, or nearly $20 million, to reach likely voters across the Internet. In comparison, CLF spent $2.7 million on digital in 2016. They even opened their first grassroots office in February 2017.

The super PAC also invested an extra $3 million in voter contact efforts across 15 districts, including:

The CLF even targets and emphasizes local issues facing each congressional district. For example, in Rep. David Valadao’s (R-CA) race, they focus on water resources for the Central Valley and fighting the California gas tax, while in Rep. Tom MacArthur’s (R-NJ) district they focus more on the opioid crisis.

The CLF has chosen New Jersey’s third congressional district as one of their key congressional races. The third New Jersey Congressional has elected MacArthur to Congress twice, both in 2014 and 2016, and before then they chose former Eagles left tackle and Republican Jon Runyan as their representative in 2010 and 2012. The last time NJ-3 went for a Democrat was in 2008, during a huge down-ticket wave from Barack Obama’s historic presidential election.

Congressman MacArthur hopes to defeat Democrat Andy Kim, a Democrat with far-left ties who has tried to paint himself as a moderate. Kim founded and served on the board of directors of Rise Stronger, a far-left group dedicated to resisting President Donald Trump’s agenda. MacArthur even pointed out during the race that Kim has “been endorsed by the New Jersey Communist party.”

Kim previously refused to answer 16 times whether he would support abolishing the Immigration and Customs Enforcement (ICE) agency and then later granted that the would oppose eliminating the nation’s immigration enforcement agency.

Kim has faced backlash over embellishing his national security resumé. Kim claimed to be a national security officer during the George W. Bush administration; however, his own LinkedIn page admits that he worked as an entry-level staffer for the United States Agency for International Development (USAID) for less than a year when he was 22-years-old.

In contrast to Kim, MacArthur has worked as then-House Tuesday Group co-chairman to work with House Freedom Caucus Chairman Mark Meadows (R-NC) to make changes to the original Obamacare repeal proposal known as the American Health Care Act (AHCA) to ultimately pass through the House.

MacArthur has also worked to help pass and champion Trump’s tax cut legislation which has poured— as President Donald J. Trump calls it– “rocket fuel” on the economy.

Breitbart News spoke with multiple CLF activists on Saturday about why they want to get involved in grassroots activism. The CLF office in New Jersey features roughly 30 interns and volunteers who work several days a week and at least four or five hours a day to energize Republican voters. 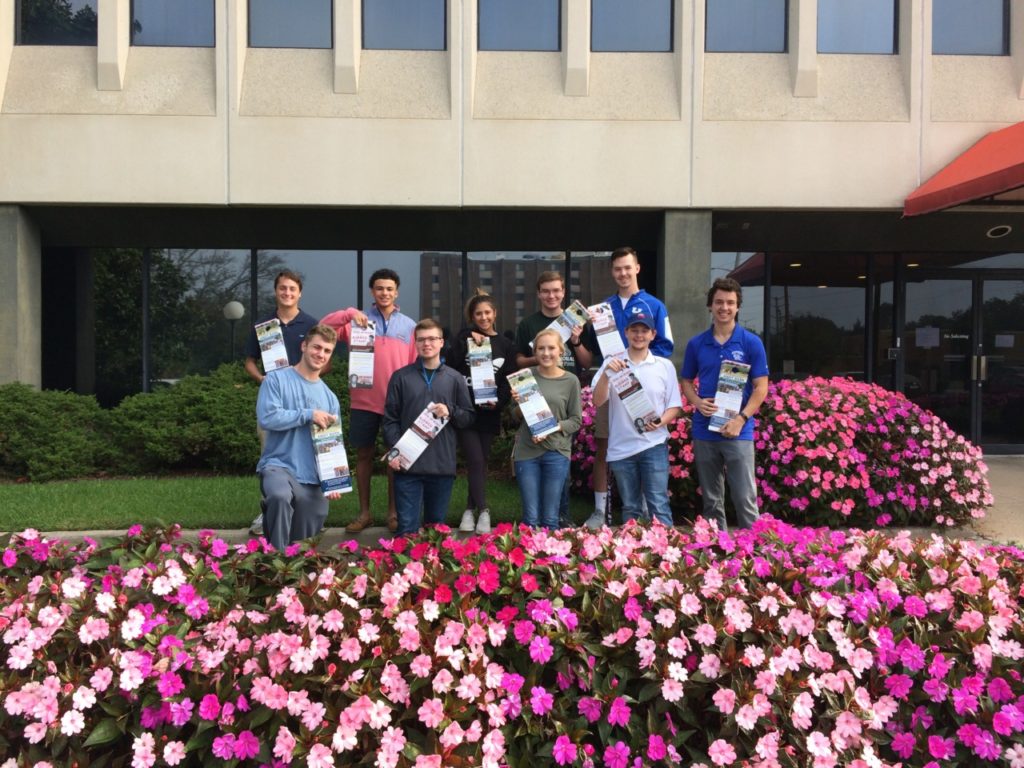 Will, a student at The College of New Jersey (TCNJ), told Breitbart News that voters across Burlington County are fired up about this race. Will said at one Andy Kim town hall, “A former Navy Seal from Burlington Country got up to condemn [Andy Kim] that he overstated” his national security resumé.

Miranda, a student at Rowan University, told Breitbart News that many of the New Jersey residents she speaks with believe Kim is a “D.C. outsider who’s entitled” and wants to derail the progress that Republicans and President Trump have made in the last two years. Miranda also said that many residents, even some Democrats, have become upset with Democrats’ tactics to disrupt and resist the democratic process.

Miranda said that the opioid issue has been ignored in New Jersey’s third congressional district, which, fortunately, Rep. MacArthur has worked to shed a “light on” the issue. 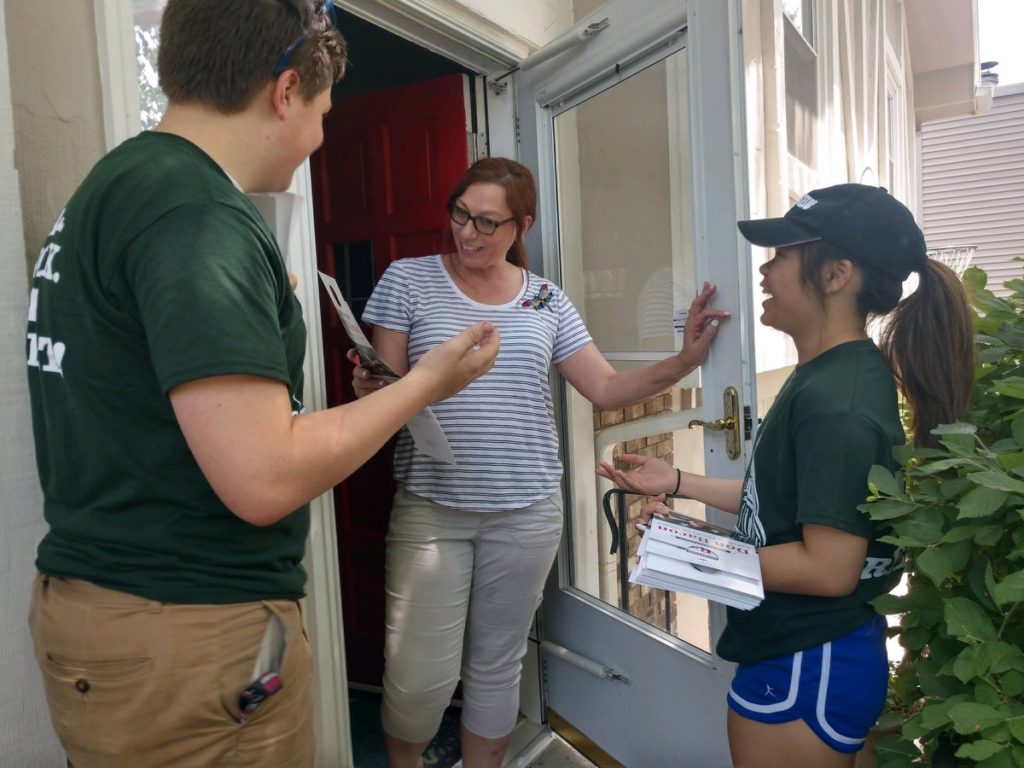 “CLF has a packed house in #NJ03, where our field team is calling voters and talking to them about the work @tmac4congress is doing on their behalf. #CLFInTheField,” CLF wrote.

CLF has a packed house in #NJ03, where our field team is calling voters and talking to them about the work @tmac4congress is doing on their behalf. #CLFInTheField pic.twitter.com/Sbv5OWATeb

Here, you can see a sample flyer that CLF activists use to spread the word about how Rep. MacArthur has helped the New Jersey third district, which includes: 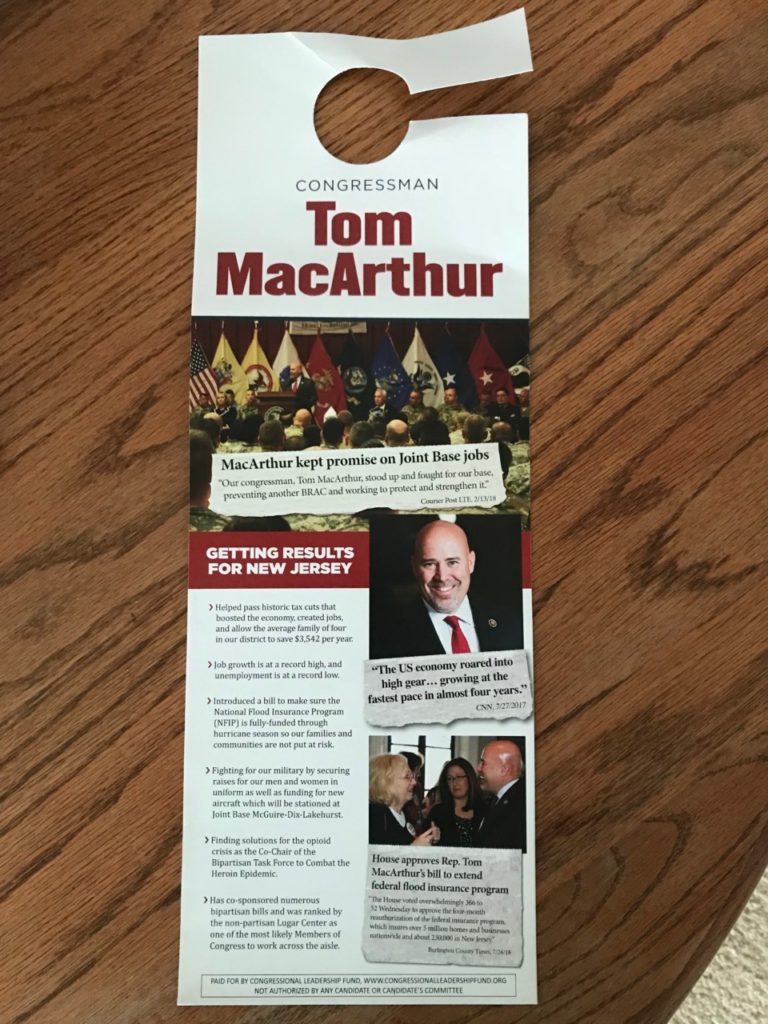 On the obverse side of the flyer, CLF illustrates how electing Andy Kim is not the right choice for New Jersyans. CLF notes: 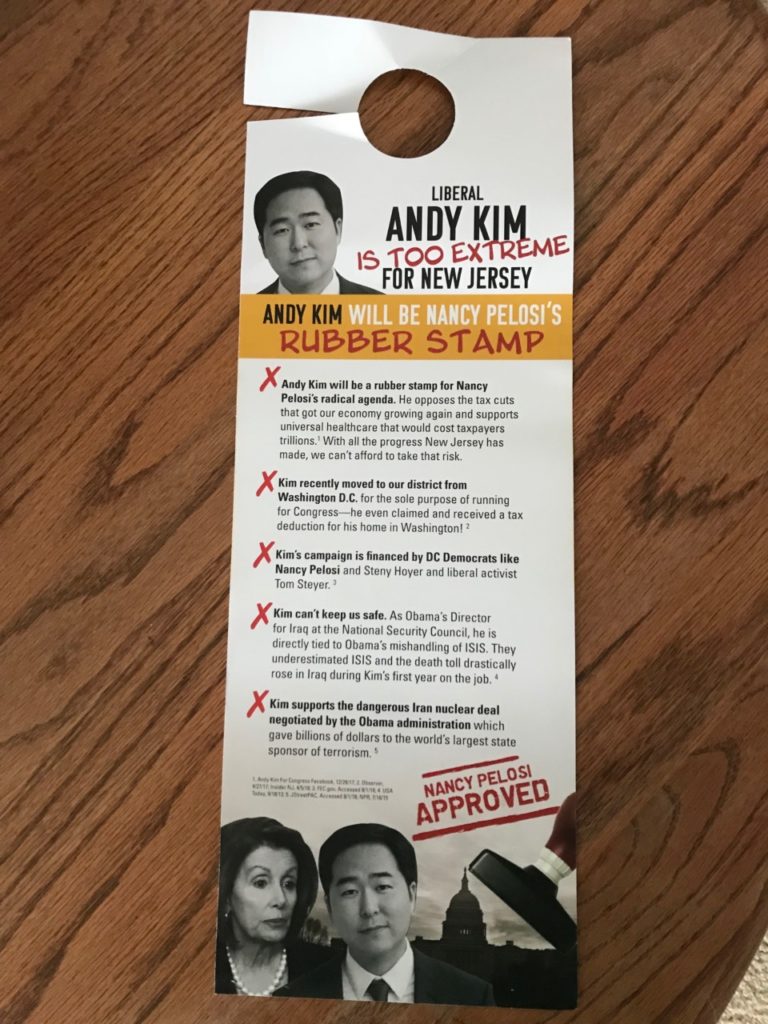 New Jersey third’s district along 61 other congressional districts, encapsulates the 62 must-win districts the Republican Party must hold to keep the House majority. Breitbart News reported in August of the must-win races, 27 are “looking good” for the GOP, while 38 “hang in the balance.”

President Donald Trump charged during a campaign rally in Missouri in September that Republican voters cannot be complacent or else they could face “massive regulation, massive taxes, and massive crime.”

While the media has portrayed a rising surge of Democratic voters to vote Republicans out of office through a “blue wave,” Republicans voters are starting to get increasing engaged, in part thanks to the efforts of CLF.

An NBC/Wall Street Journal poll released this found that Republicans have nearly matched Democratic interest in the midterm election.

The Journal notes positive signs for the Republicans:

Republican strategists also revealed that the Supreme Court nomination of Judge Brett Kavanaugh has “dropped a bomb” into the electorate, energizing Republican interest in voting this November.

One poll from West Virginia found that 58 percent of voters want Kavanaugh confirmed to the Supreme Court, while only 28 percent do not want him to join the nation’s highest court.

Glen Bolger, a GOP pollster, tweeted on Friday, “Seeing a significant jump in GOP voter interest in the elections this week. The Dem intensity advantage is melting away. Two things: 1. I figure it has to be Kavanaugh effect. 2. Remains to be seen if it lasts. GOP campaigns should not assume their turnout concerns are done.”

Seeing a significant jump in GOP voter interest in the elections this week. The Dem intensity advantage is melting away. Two things:
1. I figure it has to be Kavanaugh effect.
2. Remains to be seen if it lasts.
GOP campaigns should not assume their turnout concerns are done

Josh Holmes, a Republican consultant, tweeted, “Looking at some poll numbers this morning, it’s impossible to overstate how important the Kavanaugh hearings have been to voters. Like dropping a grenade into the electorate. Ds in red states are not going to like this.”

Looking at some poll numbers this morning, it’s impossible to overstate how important the Kavanaugh hearings have been to voters. Like dropping a grenade into the electorate. Ds in red states are not going to like this.