Wind turbines are terrible for the health of the millions of birds and bats they slice and dice every year – and they’re not much good for humans either: they can even stop your heart working properly.

This was the conclusion of an experiment conducted recently by a medical team in Mainz, Germany, led by Professor Christian-Friedrich Vahl.

Interviewed in Allgemeine-Zeitung, Vahl said that the Low Frequency Noise generated by wind turbines can weaken the heart muscle and change the blood flow.

Prof. Wahl became interested in infrasound and its impact on health after a friend who lived near a wind park had complained of feeling continuously sick. It is known that all around the world people living near wind parks often experience health issues – some being severe.

The group led by Prof. Vahl conducted an experiment to find out if infrasound has an effect on heart muscle strength. Under the measurement conditions, the force developed by isolated heart muscle was up to 20 percent less.

The strength of the heart muscle is important in the event the aortic valve becomes caked up and thus more narrow. According to Dr. Vahl: “This changes the blood flow and the flow noise.”

Now researchers are discussing whether these changes can pose an additional risk to the function of the heart, the Allgemeine Zeitung reported.

Citing the results, Prof. Vahl said: “The fundamental question of whether infrasound can affect the heart muscle has been answered.”

The researchers conclude: “We are at the very beginning, but we can imagine that long-term impact of infrasound causes health problems. The silent noise of infrasound acts like a heart jammer.”

There has long been anecdotal evidence that wind turbines are injurious to human health. I first heard these stories myself on a visit to Australia in 2012 when I met several people who had experienced serious health problems from the effects of wind turbine infrasound – and had been forced to abandon their homes. Subsequently, I also spoke to people in the UK who were also victims of Wind Turbine Syndrome.

You can read the first report I wrote on the subject here.

Here is a more recent one, full of useful links, titled: Donald Trump is so Right to Wage War on Wind Farms

The wind industry is a massive class action suit waiting to happen. [Especially now that the World Health Organisation has confirmed the health risks – which, of course, just like Big Tobacco, Big Wind has been covering up for years] Indeed, of all the scandals to emerge from the great global warming scam, the wind industry is in my view the worst.

Wind power is often billed as cheap, clean, wholesome and safe. In fact, it’s very expensive, environmentally damaging, harmful to humans and animals – and pretty much useless in the war on climate change. But you don’t get to read the truth very often in the credulous mainstream media which prefers to run the propaganda put out by extremely well-funded wind industry lobbyists.

Typical is this farrago of drivel from the BBC.

Wind – you guessed it – turns out to be the answer. Which isn’t a particularly big deal when you think about it. The point about renewable energy is that all of it is dramatically more expensive than fossil fuel energy. So being the “cheapest” form of renewable energy is a bit like winning the prize for “thinnest sumo wrestler” or “least unpleasant Antifa activist” or “sanest Remain voter”: pretty meaningless in the great scheme of things.

But as Paul Homewood points out  it contains three misleading statements:

1) Caroline Lucas claims that the government has “virtually banned onshore wind”. As the BBC Complaints Dept has already been forced to categorically confirm, there is simply no truth in this. The government has simply ended subsidies and (shock, horror!!) allowed local communities to decide whether they want new wind farms or not.

This is typical of the lazy, slovenly writing we see so much of at the BBC, where climate change is concerned. The BEIS shows quite clearly that intermittency costs are not included in their costings. Nor, for that matter, are “Whole System Impacts”, such as new transmission lines.

If the BBC are going to quote the BEIS report, should they at least take the time to read it properly?

3) Above all, there is this chart, showing onshore wind is cheaper than CCGT; 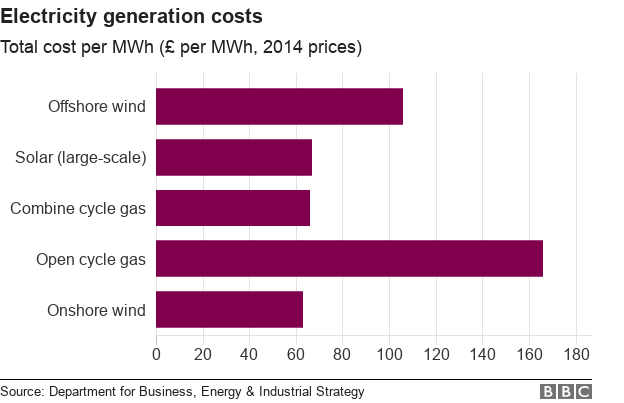 What the BBC fails to point out is that the CCGT cost includes a totally artificial “carbon cost” of £19/MWh. Without this CCGT would be costing £47/MWh.

What the BBC and its friends in the Green Party never point out is that investment in new onshore wind projects has dried up to virtually zero since subsidies were withdrawn. If it really was so cheap, why does it still need subsidising?

Why does it still need subsidising? It’s a question the wind industry is utterly incapable of answering because if it ever did so honestly the game would be up.

The wind industry is nothing more than a subsidy trough for rent-seekers.

No matter how much bigger wind turbines get, they’ll still be producing unreliable, intermittent, hugely expensive power of no use to man nor beast.

Wind turbines are so bad indeed, they’re like something that the Nazis might have dreamed up. No, wait...