Illegal immigration this year is expected to hit the highest level in a decade, reaching numbers that the United States has not seen since President George W. Bush.

In December 2018, the last month for illegal border crossing totals, there were close to 51,000 border crossings at the U.S.-Mexico border, a level that outpaced Princeton Policy researcher Steven Kopits’ monthly projection by about 3.5 percent.

“The migrants are coming, through the official entry points or away from them, but they are coming, and coming in quantity,” Kopits wrote in his monthly projection report. 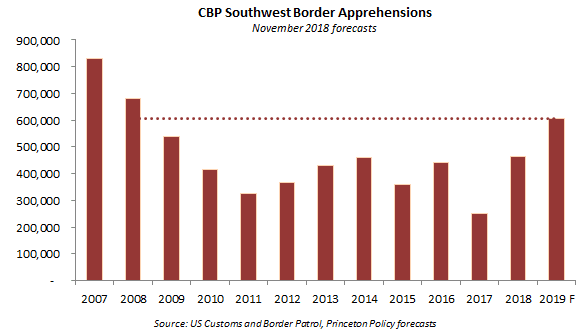 In Fiscal Year 2008, which started with Bush and ended with Obama, there were more than 705,000 crossings at the southern border. The year before, there were close to 860,000 border crossings.

Additionally, this would represent an increase of illegal immigration at the southern border between 2017 and this year of more than 99 percent.

Illegal immigration under Trump has been skyrocketing since his first year in office. For example, for the calendar year 2018, illegal immigration levels at the U.S.-Mexico border hit about 465,600 crossings. This was a level of illegal immigration not seen since Obama’s Fiscal Year 2014 border crossing totals, when about 480,000 foreign nationals were apprehended at the border.

Aside from overwhelming already strained Border Patrol and Immigration and Customs Enforcement (ICE) resources, illegal immigration hits the country’s working and middle class the hardest, as they are left paying an annual bill of about $116 billion to subsidize the cost of illegal aliens.

Every one percent increase in the immigrant composition of an American workers’ occupation reduces their weekly wages by about 0.5 percent, researcher Steven Camarotta concludes. This means the average native-born American worker today has their wage reduced by perhaps 8.5 percent because of current legal immigration levels.

The Washington, DC-imposed mass legal immigration policy is a boon to corporate executives, Wall Street, big business, and multinational conglomerates, as America’s working and middle class have their wealth redistributed to the country’s top earners through wage stagnation.