The middle class in Chicago, Illinois is “almost gone,” new research finds, as the vast majority of residents are either wealthy professionals or working-class residents living paycheck to paycheck.

Research by the Voorhies Center chronicled the near six-decade shrinking of Chicago’s middle class, which is close to nonexistent today, as corporate developers and multinational conglomerates continue dominating metropolises across the U.S. — forcing middle class residents out.

For instance, in 1970, middle income residents made up about half of Chicago, while about 42 percent of residents were either poor or working class and less than ten percent were considered wealthy.

Fast forward to 2017 and Chicago is made up primarily of working class or poor residents, 62 percent, and more than 20 percent are wealthy professionals. The middle class makes up only 16 percent of the city’s population today. 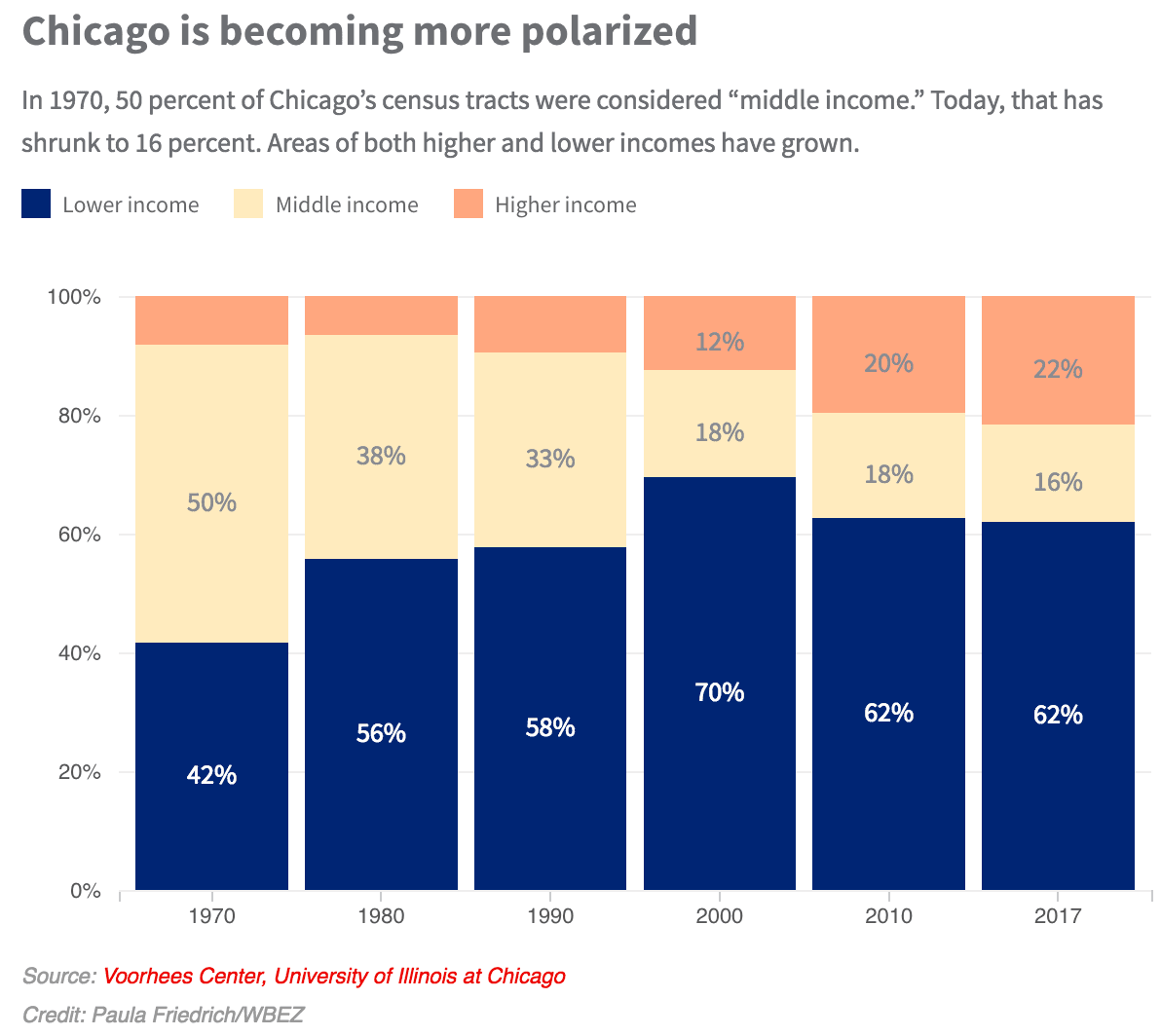 A map of the drastic middle class exodus of Chicago depicts a city where wealthy high income earners are concentrated in the downtown, skyscraper neighborhood, while mostly poor and working class residents make up almost all of the rest of the surrounding areas.

“We have two cities,” co-director of the Voorhees Center for at the University of Illinois at Chicago Janet Smith told WBEZ. “We have the rich and we have the poor.”

A majority of neighborhoods in Chicago that were once considered middle class in 1970 are now poor or working class neighborhoods, an economic change that has been coupled with rapid demographic changes primarily driven by the country’s mass legal immigration.

Today, more than 20 percent of Chicago’s population is foreign-born.

“It went from 95 percent white to 95 percent Mexican in that 10-year period,” Meyer said.

Indeed, mass illegal immigration — where many times more than a million illegal aliens arrived in the country every year — dominated the 1990s and thus demographically changed the makeup of many middle class regions of the country in a very short period of time.

At the same time, former President George H.W. Bush expanded legal immigration levels at the pleasure of Wall Street, corporate developers, the big business lobby, and the U.S. Chamber of Commerce — all of which have profited greatly from the policy’s redistribution of wealth from middle class Americans to the wealthiest of earners.

“When you go back to 1970, the areas that are considered middle income — those were basically white,” demographer Rob Paral told WBEZ. 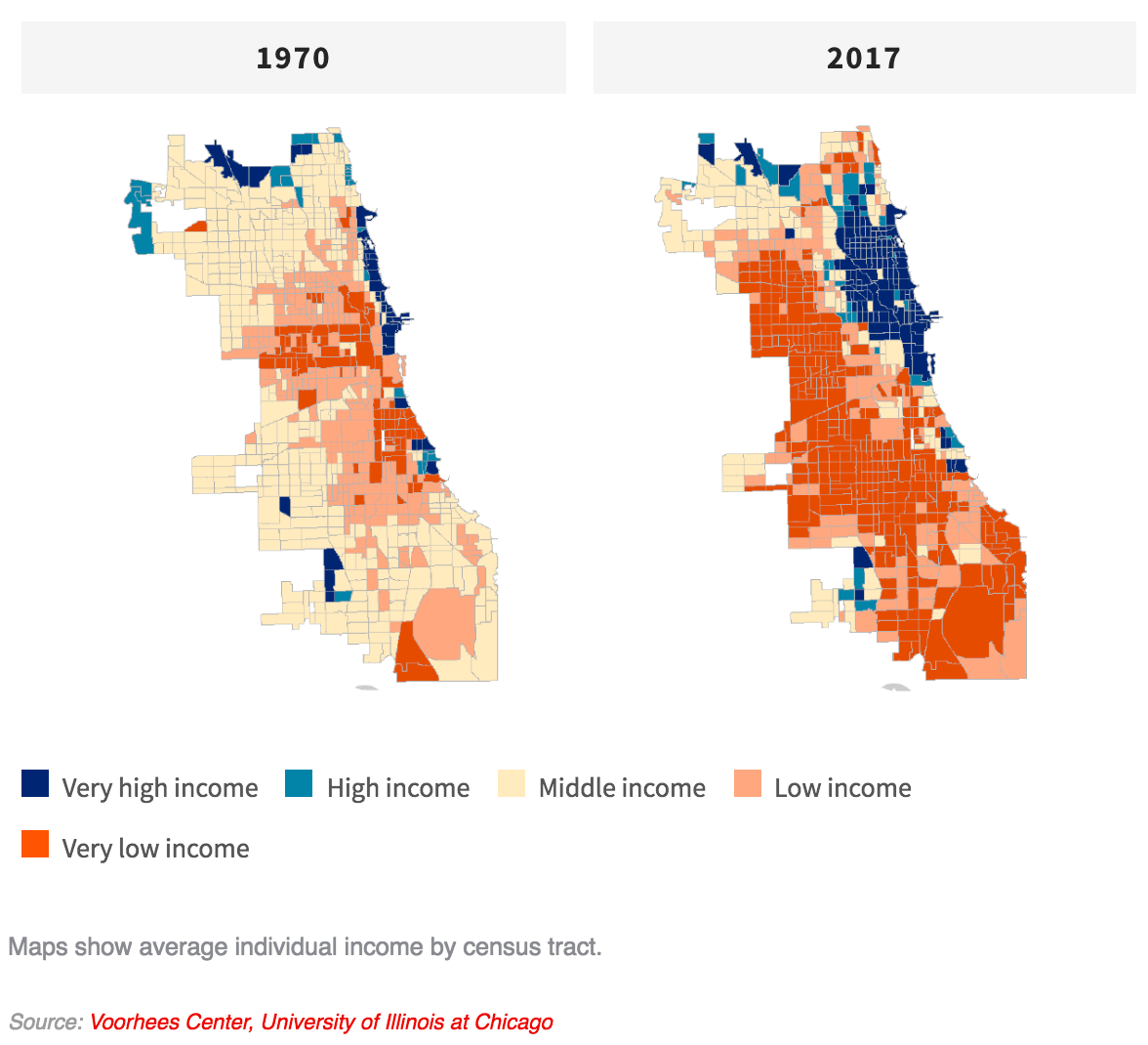 Chicago is not alone in its income inequality. Other metropolis cities, like San Francisco, New York City, Los Angeles, Seattle, and Washington, D.C., have all become havens for the rich-poor economic gap.

Researchers have said New York City, for example, is losing about 100 middle class residents every day as the city’s population booms — primarily because of immigration — and real estate becomes increasingly expensive.

In the 1970s, middle class New Yorkers made up about 61 percent of the city’s population. Today, that middle income population has shrunk to less than 50 percent.

As Breitbart News has chronicled, between 1979 and 2017, the wages of the country’s bottom 90 percent — poor, working class, and middle class U.S. workers — have grown by only 22 percent. Meanwhile, the country’s top one percent — the wealthiest of Americans — have seen their salaries grow 155 percent over that same period and the top 0.01 percent saw their wages grow 343 percent. This means that the billionaire class has seen more than 15 times the wage growth since 1979 of the working and middle class.