Trump called out the automaker and Barra for laying off thousands of American workers and the recent closing of the Lordstown, Ohio, assembly plant.

This year, GM announced it would stop production at four of its U.S. plants, including Detroit-Hamtramck and Warren Transmission in Michigan, Lordstown Assembly in Ohio, and Baltimore Operations in Maryland. Trump initially blasted the decision, saying, “This country has done a lot for General Motors. They better get back to Ohio and soon.”

The production closures come after GM laid off about 1,500 American workers in Lordstown in 2018, while their Mexico production remains unaffected and production in China ramps up.

At the beginning of this year, GM executives began laying off 14,700 workers in the United States and Canada, with the majority of the layoffs concentrated in Michigan, Ohio, Maryland, Georgia, and Texas, including at least 3,300 American factory workers.

These layoffs included the mass layoff of at least 4,000 American workers in white-collar jobs for GM, many of whom were older and had worked at the corporation for more than two decades. Even in supporting industries, about 400 Americans are set to be laid off in the Lordstown, Ohio, region. 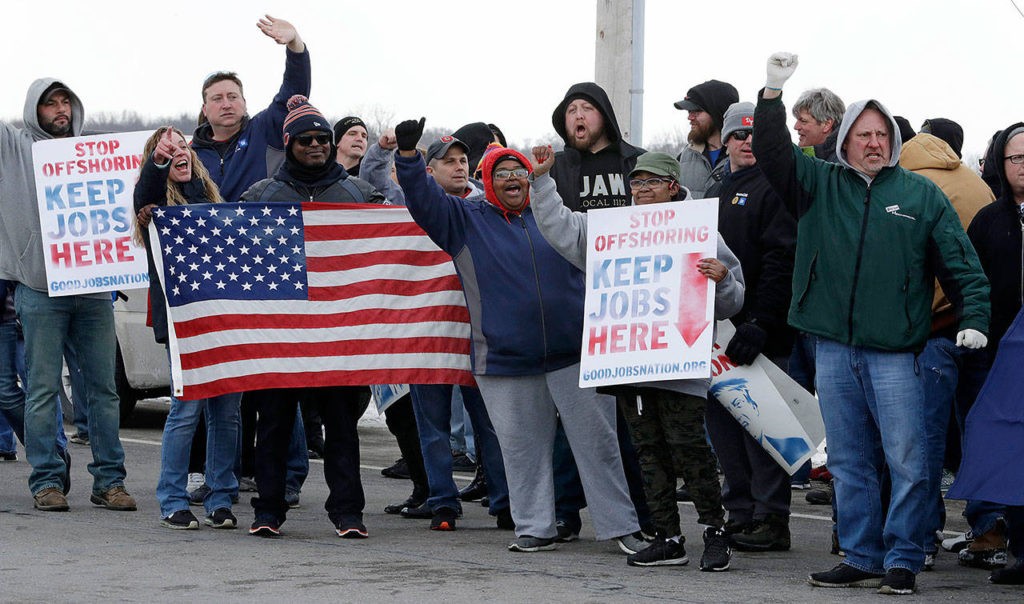 General Motors employees gather outside the plant for a protest, Wednesday, March 6, 2019, in Lordstown, Ohio. General Motors’ sprawling Lordstown assembly plant near Youngstown is ending production of the Chevrolet Cruze sedan, ending for now more than 50 years of auto manufacturing at the site. (AP Photo/Tony Dejak)

A Lordstown resident told local media that the “life of our communities is at stake” because of the plant closure, saying, “This is the last nail in the economic coffin of the Mahoning Valley. We’re fighting for our lives here.”

In a series of online posts to Twitter, Trump said GM executives needed to devise a plan, quickly, to reopen the Lordstown plant, writing that Barra and others “must act quickly.”

Because the economy is so good, General Motors must get their Lordstown, Ohio, plant open, maybe in a different form or with a new owner, FAST! Toyota is investing 13.5 $Billion in U.S., others likewise. G.M. MUST ACT QUICKLY. Time is of the essence!

In another Twitter post, Trump wrote that he had spoken with Barra and that he did not “care” who was to blame for the closure of the Ohio plant, writing that he “just want[s] it open!”

Democrat UAW Local 1112 President David Green ought to get his act together and produce. G.M. let our Country down, but other much better car companies are coming into the U.S. in droves. I want action on Lordstown fast. Stop complaining and get the job done! 3.8% Unemployment!

Just spoke to Mary Barra, CEO of General Motors about the Lordstown Ohio plant. I am not happy that it is closed when everything else in our Country is BOOMING. I asked her to sell it or do something quickly. She blamed the UAW Union — I don’t care, I just want it open!

Trump is headed to Michigan this month for a rally as he signals that economic nationalism will remain the central platform of his 2020 re-election bid with specifically the protection of American auto jobs increasingly becoming an election issue.

The closing of the four U.S. plants comes as GM has reported nearly $11 billion in fourth quarter pre-tax profit and more than $38 billion in revenue, beating financial experts’ expectations. Additionally, despite the mass layoffs, Barra has continued to rake in nearly $22 million a year.

Trade experts and fellow economic nationalists have urged Trump to pursue auto tariffs to persuade American automakers from leaving the U.S. to seek out cheaper production and less-paid foreign workers in China and Mexico.