This past Monday an event took place at the White House that many Americans might think would be an April Fool’s joke if it had been initiated by any typical Republican politician.

President Trump hosted a gathering to celebrate the First Step Act, the prison reform legislation recently passed that begins to address sentencing and other issues for people incarcerated in the federal prison system.

It was my great privilege to be in the room with the President, Jared Kushner and Ivanka Trump who were the driving forces behind the initiative, and numerous members of the House, Senate, and activist groups who all played a key role in taking this “first step.”

The most important people in the room, however, were not the politicians who voted, they were the people who have been released from prison as a direct result of the First Step Act.

This event was not covered by the MSM because of how well it reflected upon the President and because of the praise he received from the people whose lives he has helped change forever. During the event, he introduced the guests of honor and had some of them step up to the microphone. 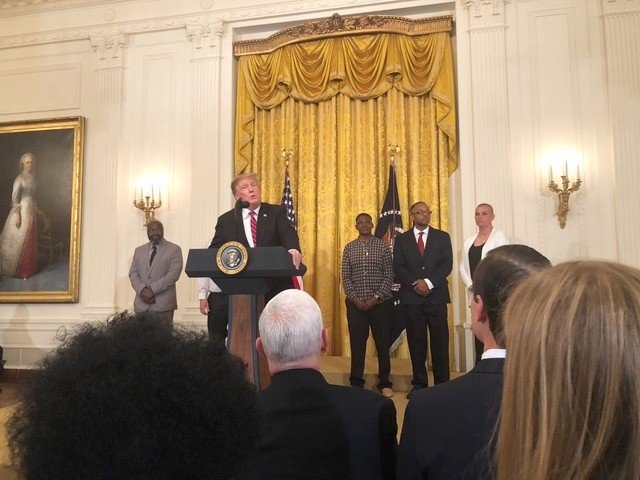 President Trump, Jared Kushner and Ivanka Trump who were the driving forces behind the First Step initiative (Charlie Kirk/Breitbart News).

Gregory Allen made me laugh out loud when he enthusiastically shared with the crowd that two months ago, he was in a jail cell and now he is in the White House. He used that dichotomy to suggest “Let’s continue to make America great again.”

April Johnson made tears well in my eyes when she stepped up and shared with everyone how last September her daughter received a diagnosis of ovarian cancer with a very pessimistic prognosis. Because of the First Step Act, she was now going to be able to spend the time her daughter has left at her side instead of in her memories.

Several of the guests referred to the people they had left behind in prison and how there is still more work to be done. They mentioned the need for a “Second Step Act,” as did the President. It is forthcoming and it will address reentry into societyand reducing the unemployment rate for people with prison records. The President noted that their unemployment rate is roughly five times higher than the same measure for the general population.

Odd. We will gladly employ people who are here illegally but are less willing to employ someone who did something illegal and has paid the price for it.

President Trump can act in this area because while he ran as a Republican, he is not in any sense of the word a “traditional” Republican. The Republican Party has positioned itself as the party of “law and order.” Somehow, this has been lazily equated with not caring for lawbreakers. It is as if because a person has broken a law, they then become less than fully human. It is an extension of the idea that if you want to support our police, a common position for conservatives to take, then you can’t support anyone who has run afoul of the police.

This is broken logic and the President is the first Republican to bend down to pick up the pieces. 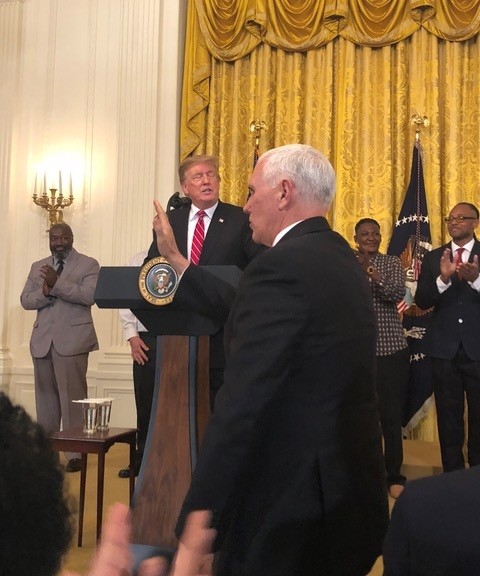 In fact, he is the first President to address this, period.

If people want to point to divided government as an excuse for things not getting done, I direct you to the first two years of the Obama administration where they had control of both the House and Senate. This wasn’t on their agenda. During that period, the only aspect of the criminal justice system on President Obama’s mind was pardoning himself for stealing away our choices for our own doctors andhealth insurance plans.

The First Step Act happened because President Trump and his much-maligned daughter Ivanka, and her even more maligned husband Jared, were willing to take that first step into an arena that other conservatives, and liberals, have not dared to enter. They were willing to do this because they are not beholden to party politics and special interest constituencies. Take a deep breath and enjoy the politically clean air.

In his remarks the President mentioned damage done by what he called the “Clinton Crime Act,” properly known as the Violent Crime Control and Law Enforcement Act of 1994. This Act, which had Senator Joe Biden as a major proponent, was Draconian in nature and helped to firmly stamp the word “hopelessness” across the forehead of anyone convicted of a felony within the federal system. First Step, and now Second Step, are this President’s way of working around VCCLE without having to repeal it.

To try and put all of this into perspective, President Donald Trump, along with Jared, Ivanka, and others, have recognized that in America we have systematically and thoroughly dehumanized people who have committed crimes and been run through the criminal justice system. They further have recognized that we have created a culture that implicitly says, “you may have served your time, but we are not done punishing you yet.”

The President who is not beholden has showed a willingness to say enough!

In his remarks, the President made references to human “dignity and potential,” moving toward “a nation that believes in redemption,” and giving a people a chance to “contribute to their community, state, and nation.” He also said that we are “one united nation sharing one common destiny.”

That statement might seem preposterous to anyone who observes how divided our nation is today in terms of political conflict. The truth is, we are united whether wewant to be or not. We are in this together; joyously, reluctantly, or otherwise. We are all to be measured in part by how we treat the least and the troubled among us.

I, for one, stand joyously in unity with the President, Ivanka, and Jared in supporting what’s been done in Step One and what is to come in Step Two.