Legal and illegal migrants send $150 billion in untaxed funds back to their homelands each year, denying the remittances to Americans and their communities, according to a Federation for American Immigration Reform (FAIR) report.

The United States’s “generous and lax immigration policies have led billions of dollars to flow out of our economy untaxed, which is a disservice to Americans,” said a statement FAIR President Dan Stein made about the remittances. “When our country urgently needs tax revenue to improve physical and societal infrastructure programs, it’s imperative to address this drain on our resources immediately.”

It is bad enough that American taxpayers are being asked to provide welfare for foreign nationals in the United States. It only adds insult to injury when our state, local and federal governments allow income that could be taxed to reduce some of the costs associated with unchecked mass migration (both legal and illegal) to simply flow out of the U.S. economy and into foreign pockets.

The funds come from the roughly 45 million foreign-born legal immigrants and illegal migrants who are living alongside 280 million Americans. The migrants come from various countries, including Mexico, China, and India. 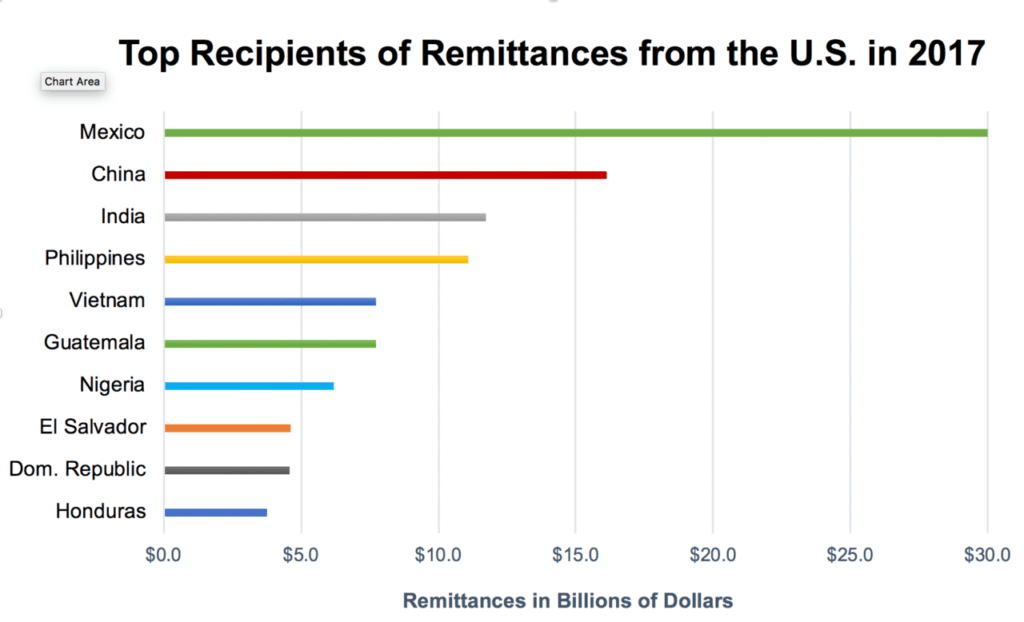 Top recipients of remittances from the U.S. in 2017

The immigrant and migrants are under family pressure to support their relatives living at home, where U.S. dollars have a high value. The report said:

American dollars are generally worth significantly more than the local currency in developing countries. For example, according to 2017 data, the average hourly wage in India is about 61.9 Rupees, or roughly $0.90. That means that a U.S.-based relative can provide an Indian citizen with one month’s wages by remitting roughly $150 per month. A slightly larger remittance of $250-$500 per month can support an extended Indian family in a comparatively luxurious style.

But the exported funds are lost to local American retailers, employees, and governments, the report said:

Rather than being used to purchase goods and services [locally] in the United States, the majority of remittance monies go directly into the pockets of foreign businesses. A smaller portion of remittance payments indirectly wind up in the coffers of foreign governments through duties imposed upon the cash transfer itself or taxes on the goods and services purchased with that cash.

The money sent abroad is typically disposable income (that would often be spent on small luxuries) … When immigrants remit portions of their income to other countries, it places more pressure on the local jurisdictions in the states where they reside to make up that lost revenue elsewhere. This often results in higher overall taxation rates.

Furthermore, local businesses suffer because those who send remittance payments abroad typically end up with less disposable income. Money sent to other countries means less money to spend on goods and services in the communities where foreign-born individuals live.

The export of funds also reduces the ability of the home countries to grow their own economies, according to the report:

Remittance payments act like a welfare program, dis-incentivizing participation in the labor force. If one’s financial needs are being met by a benefactor abroad: Why pursue job training or seek employment?

Furthermore, countries with higher rates of remittances received tend to suffer from the “brain-drain” effect. A brain-drain occurs when those immigrants who have used remittance payments to obtain further education, or upgrade job skills, migrate out of developing economies in search of a higher standard of living

Even without remittances, media reports reveal that the lure of low-wage American jobs is draining Central American towns, schools, and workforces:

The US govt's appetite for more cheap labor is distorting Central America's economy by encouraging & subsidizing migration instead of boosting local investment & job-growth via trade. https://t.co/ox747dO6qS

The remittances are just another way in which large-scale migration redistributes a huge amount of wealth from ordinary Americans to coastal cities and investors, as well as to foreigners.

But the federal government imports another roughly three million foreign workers each year.

The government also imports roughly one million work-permit workers who work for one to three years, tolerates about eight million illegal residents, and does not punish companies for employing the hundreds of thousands of illegal migrants who sneak across the border or overstay their legal visas each year.

This policy of flooding the market with millions of foreign white-collar graduates and blue-collar laborers means that Americans must compete for jobs by taking lower wages. In contrast, employers and investors rarely have to compete for American workers by offering higher wages.

The labor policy also moves business investment and wealth from the Heartland to the coastal cities, explodes urban rents and housing costs, and shrivels jobs and real-estate values in the Midwest. It also increases state and local tax burdens, and it hurts children’s schools and college educations.

Additionally, the policy pushes Americans away from high-tech careers, and it sidelines millions of marginalized Americans, including many who are struggling with drug addictions. It also drains workers and graduates from developing countries and diverts $150 billion a year from the American economy to foreign countries: