Multiple polls show many Americans are willing to support fellow Americans who say they are transgender — but the polls also show that generic support drops sharply whenever voters face specific trade-offs and dilemmas.

The shift was spotlighted in the May 2019 Harvard Harris poll where public support for transgender men’s access to women sports drops by more than half once the questions shift from generic and confusing to specific and clear.

The first generic and confusing question asked: “Should competitive athletic teams in high schools and college allow transgender to play on the team of their stated sex or require them to play on the teams of their birth sex?” The 1,295 voters split their answers 49 percent to 51 percent.

Support crashed when respondents were provided with a simpler and more specific second question. The question — “Should we make all sports gender-neutral, allowing athletes of both sexes to compete with one another as they chose?” — generated just 29 percent support, down by 20 points from the generic question.

But that second question was also too obscure for some respondents — the support for the biology-is-sex side dipped from 51 percent to 47 percent, while the “unsure/don’t know ” jumped to 24 percent.

The Harvard Harris poll also asked a third question that was even simpler and more specific: “Do you consider it fair or unfair for athletes of one sex to compete against gender-neutral or trans-gender athletes who were born as members of the other sex?” Support for the pro-transgender view dropped by another six points down to 23 percent. That was less than half the support prompted by the first, most obscure, question.

Every poll should use specific and easy-to-understand questions, said Terry Schilling, director at the American Principles Project. “It should come at this by asking: ‘Should high schools and colleges allow boys who identify as women to play in women’s sports?'” he said. The answer “would be lopsided…. [because] people know that boys and men have an advantage in athletics over women,” he said.

A simple and specific question was used in a May poll by Rasmussen Reports, and it got 2:1 opposition: “Do you favor or oppose allowing transgender students to participate on the sports teams of the gender they identify with, letting biological males, for example, play girls sports?” The question got 54 percent “No,” 28 percent “Yes” answers, and 18 percent “Not sure” from the polls of 1,000 adults.

The two-to-one opposition would rise even further if respondents were asked a question from the women’s’ perspective, Schilling said. For example, a question that asked, “Should women have the right to exclude men from their athletic competitions?” would prompt even more opposition, he said. The latent, untapped opposition is visible in the Rasmussen poll, where 23 percent of women said they were not sure if they supported “letting biological males, for example, play girls sports?”

The generic-to-specific crash occurs repeatedly in the transgender polls amid the unfamiliar and confusing language.

For example, the Harvard Harris poll showed the public split 50:50 when asked the confusing and generic question: “Do you favor or oppose a law to require public institutions and accommodations to require transgender people to use bathrooms of their sex at birth?”

The “sex at birth” term is unfamiliar and confusing, said Schilling. “If you are not aware of the nuance of the transgender stuff, it will slip right by you … I could see how people are confused by it and really don’t know about it.” The term is used by transgender activists to declare that a person’s sex at birth can be changed, even though it is impossible to change the biology of a person’s cells, brain structure, or DNA.

But support for the transgender claim crashed down to 22 percent when Harvard Harris offered a simpler, more specific question: “How should workplaces deal with trans-gender and gender-neutral employees when it comes to the use of restrooms?”  Thirty-five percent said business should get involved, 43 percent said workplaces should offer “gender-neutral restrooms” — such as single-user bathrooms for both sexes — while only 22 percent backed the core transgender demand they be treated as members of the opposite sex.

The April poll of 1,100 adults by the Public Religion Research Institute used even more obscure language than the Harvard Harris poll, and the general-to-specific crash was also visible.

For example, the PRRI poll showed that 31 percent “strongly” support “Laws that would protect gay, lesbian, bisexual, and transgender people against discrimination in jobs, public accommodations, and housing.” That generic response was undercut by a subsequent specific question, when only 18 percent said they would “strongly” oppose “Laws that require transgender individuals to use bathrooms that correspond to their sex at birth rather than their current gender identity.”

This downward generic-to-specific trend is accompanied by sharp partisan splits over the core transgender demand that the government must declare that each person’s sense of “gender identity” is more legally and socially important than their male-or-female biological sex.

“The idea that being male or female does not matter is insane,” said Schilling. This is a revolutionary demand because the different strengths and desires of the two complementary sexes have always been a core element of culture and law. For example, men’s stronger bodies ensured they were expected to take risks, compete, labor, and fight; while women’s ability to create new people pressured men to form cooperative couples. Those complementary roles are now blurred by prosperity and contraception — especially among upper-income people — but are a core part of people’s evolved preferences.

The PRRI poll offered up a useful chart showing the public’s attitudes towards the transgender ideology’s claim that there is “a range of many possible gender identities.” The poll did not use commonplace language about sex and biology, but it got back unwelcome answers showing that 43 percent of Americans strongly recognize only “two genders,” while 24 percent strongly believe there is a range of genders. 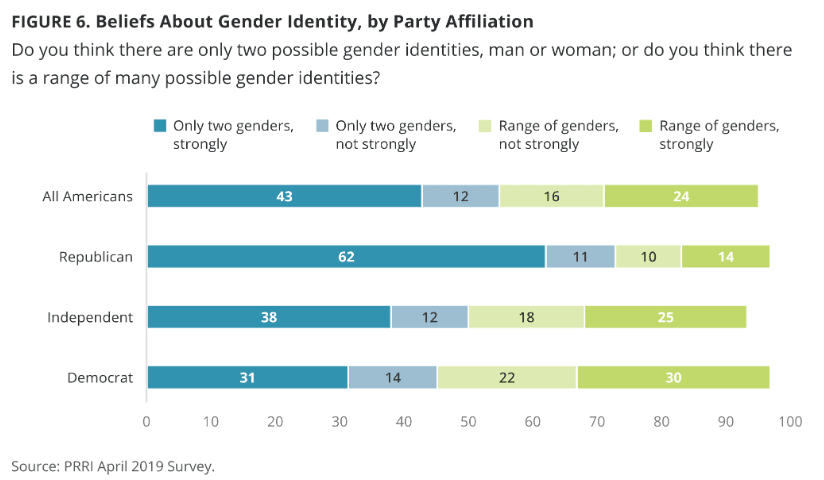 That national result hides the political power of the normal view that the two sexes are more important than “multiple genders.” The data showed that Democrats’ “strongly” views are evenly divided between sex and gender, that Republicans’ “strongly” views are overwhelmingly pro-sex (62 percent to 14 percent) and that independents lean towards the GOP with a 38 percent to 25 percent “strongly” split.

The pro-transgender Arcus Foundation funded the PRRI’s poll and PRRI did not ask any clear or specific questions.

Predictably, the pro-transgender poll was welcomed by establishment media.

“Support for transgender people serving in military service has grown among Republican ranks over the last two years, despite the Trump administration’s ban on transgender personnel serving in the U.S. military, a new study shows,” said a credulous report in Newsweek.

Similarly, Aaron Blake at the Washington Post reported that”A new poll from the Public Religion Research Institute shows that nearly two-thirds of Americans oppose the ban [on transgender people in the military]. And while there is, generally speaking, little change from when Trump first made the announcement in 2017, there is a notable shift among one group: Republicans.”

“Americans are quickly adopting positions in support of transgender rights,” claimed an op-ed in TheHill.com. “Sixty-two percent of Americans say they have become more supportive of transgender rights in the last five years, according to a Public Religion Research Institute (PRRI) poll last month,” said the op-ed by Democratic consultant Mark Mellman.

“I don’t think the media does a good job in highlighting problems with the polling,” said Schilling. “The media needs to do a better job in policing these biased surveys,” he added. When conservatives conduct polls, the media “all ask the tough questions and dig into our ideology, but why don’t do that for them?”

But many polls are not designed to reveal the public’s true views but instead to nudge people towards a political goal, he said. “Many are done as propaganda … [because] humans want to fit in, to be part of the mainstream, so these polls which appear to show growing support for transgender issues are mostly meant to intimidate and coerce people,” he said.

The social pressure is accentuated in polls and PR by funding from wealthy millionaires — many of whom are also political donors, said Schilling.

If GOP politicians want to win or to just get reelected, “they should reject the [polls and donors] outright,” he said.

“We should point out that these polls do not get into the real heart of the matter, they don’t ask the tough questions… [such as] ‘Should boys who identify as girls be able to compete in women’s high school and college athletics?’ That is a fair question because a lot of people don’t understand this transgender question.”

The ideology insists that men and women’s bodies are more or less identical, and it objects to the public’s view of the two sexes as simultaneously different, complementary, and equal. The transgender advocates want to impose their ideology on Americans by establishing “transgender rights” laws, which would require the Department of Justice to penalize individuals and groups that insist that women and girls are biologically different — and have different priorities — than men and boys.

Multiple polls show that most Americans wish to help and comfort people who think they are a member of the opposite sex, even as they also reject the transgender ideology’s claim that people’s legal sex is determined by their feeling of “gender identity,” not by biology. A U.K. survey shows a similar mix of sympathy for people who say they are transgender alongside lopsided opposition to the ideology.

Transgender advocates claim that two million Americans say they are transgender to a greater or lesser extent.

But very few people who describe themselves as transgender undergo transition surgery of the genitals. Only about 4,118 Americans surgically altered their bodies in hospitals from 2000 to 2014 to appear like members of the opposite sex, according to a pro-transgender medical study. A 2018 Pentagon report commissioned by former Defense Secretary James Mattis said that “rates for genital surgery are exceedingly low- 2% of transgender men and 10% of transgender women.”

The transgender movement is diverse, so the different factions have competing goals and priorities.

It includes feminists who wish to blur distinctions between the two sexes, people who glamorize the distinctions between the two sexes, masculine autogynephile men who demand sex from lesbians, lonely or autistic people, as well as revenue-seeking drug companies and medical service providers. It includes wealthy donors, ambitious politicians, and professional advocates. The movement also includes sexual liberationists and many progressives who are eager to liberate people from their bodies, non-political people who are trying to live as members of the opposite sex, high-profile children, troubled teenage girls trying to flee teenage strife, and people trying to “de-transition” back to their sex, plus parents who are eager or willing to endorse transgender claims.

The gender ideology is rapidly gaining power, aided by huge donations from wealthy individuals and medical companies. It has already attacked and cracked many of the popular social rules which help Americans manage the cooperation and competition among and between complementary, different, and equal men and women.