Only about one-in-seven people in the United Kingdom accept the transgender ideology’s demand that each person’s sex is not determined by their biology, but by their feeling of “gender identity,” according to a new survey.

The U.K. survey is relevant to the United States because it provides information on public attitudes in the swirling controversy over “transgender rights.” Americans are rarely asked for their views on claimed transgender rights, but the U.K. survey asks about practical civic problems, allows people to pick “don’t know,” it uses neutral language, and it does not pressure people to endorse alleged “rights” claimed by pro-transgender groups.

The survey was conducted for the Fair Play for Women campaign, which is seeking to preserve the legal status of women in the face of pro-transgender demands that the government must blur any legal recognition of the complementary differences of men and women. A polling firm, Populus, ran the survey of 2,074 U.K. respondents in late October.
“Elected representatives need to be aware that a very significant majority of the population want to retain rights related to sex and its objective nature, not [to the idea of] “gender” and the ideology connected with it,” said Paul Dirks, a Canadian who supports the legal recognition of male and female differences.

The best score for transgender advocates is the 19 percent of respondents who provided a “yes” answer to this question:

Q2. We would now like you to think about a person who was born male and has male genitalia but who identifies as a woman. In your own personal view would you consider this person to be a woman or a man?

But that generous personal acceptance by one-in-five respondents dropped quickly when the respondents were asked to apply the identity-over-biology rule to commonplace situations.

For example, only 13 percent of people said men who are living as women should be allowed “to compete in female-only sporting events.”

Eleven percent answered “yes” when they were asked, “Should a self-identifying transwoman with a penis be free to use female changing rooms?”

Thirteen percent said people should be allowed to change their sex without even visiting a doctor for confirmation.

The U.K. has many “hate speech” laws, including criminal penalties and government stigmatization for criticism of religions. So the authors asked if the statement “‘women cannot have male genitalia” should count as “hate speech” or “be allowed to be expressed.” 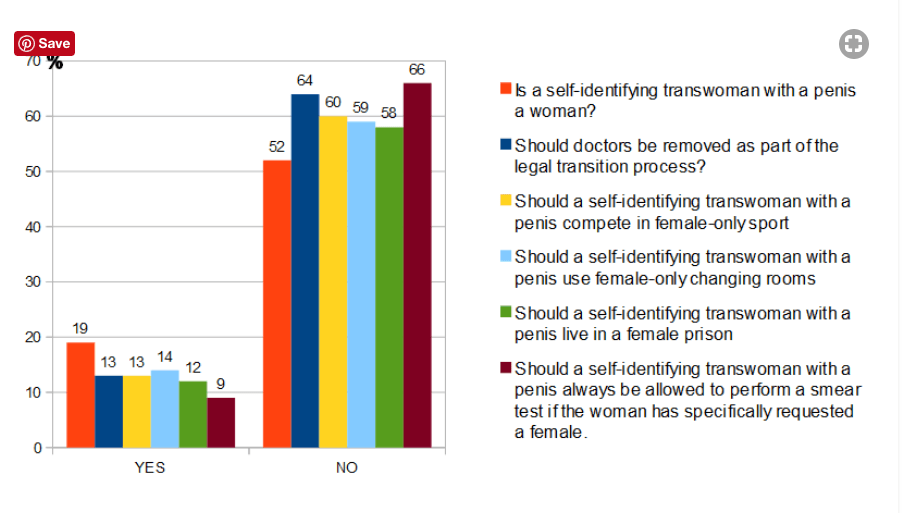 In the United States, several polls show transgender ideology is deeply unpopular, especially among women and parents. In 2017, former President Barack Obama told NPR that his promotion of the transgender ideology made it easier for Donald Trump to win the presidency in 2016.

Multiple polls show that most Americans wish to help and comfort people who think they are a member of the opposite sex, even as they also reject the transgender ideology’s claim that a person’s legal sex is determined by their feeling of “gender identity,” not by biology.

Despite the public disapproval, many Democrats are forcefully endorsing the transgender claim that men are entitled to be treated as women once they say they are women. Breitbart News reported in November:

It is “cruel and unscientific” to define a person’s legal sex by their biology, says a pro-transgender complaint signed by 98 Democratic House legislators.

The Democrats’ statement was sent to President Donald Trump’s administration after the New York Times reported that the administration will formally clarify that the sex of people involved in sex-discrimination legal fights will be based on their male or female body.

Trump’s biology-determines-sex policy “makes it clear that members of this administration are willing to … solidify an archaic, dogmatic, and alarming view of the world,” the Democrats complain their letter to the Department of Health and Human Services (HHS).

This men-have-women’s-rights demand is having a growing impact on civic rules and even on companies.

Transgender groups appropriate women's ideal: Victoria's Secret manager says he 'hopes' to use transgender models, AKA men who want to be women. The submission came after social-media backlash to his comments saying the brand cannot include every subgroup. https://t.co/nBUCllvvFw

Very few people who describe themselves as transgender undergo cosmetic surgery of the genitals. Only about 4,118 Americans surgically altered their bodies in hospitals from 2000 to 2014 to appear like members of the opposite sex, according to a pro-transgender medical study.

In Ohio, for example, in February 2018, a judge forced parents of a teenage girl to give up custody so she can begin a lifetime of drug treatments and surgery that will allow her to appear as a male.

In November, progressives united with business and media groups to defeat an anti-transgenderism, pro-women ballot in Massachusetts. Advertising and media coverage portrayed the biology-is-legal-sex initiative as a measure that would discriminate against people who live as members of the other sex.