Apple Inc. should be allowed to hire ‘DACA’ illegal migrants because they are good for the company’s shareholders, according to a legal plea sent to the Supreme Court.

“They, and [legal] immigrants like them, are vital to Apple’s success,” said the plea by CEO Tim Cook and by the company’s human resources chief, Deirdre O’Brien. “They spark creativity and help drive innovation. They are among our most driven and selfless colleagues.”

The 16-page plea included one legal argument: that the 443 illegal migrants deserve relief because they submitted their names to the federal government to get DACA benefits. “This Court has recognized that ‘serious reliance interests’ like these carry significant legal weight, said the document.

Instead of addressing the legal issues, Cook offered broad business and moral claims that would sweep away Americans’ right to border and decent wages in an American-only labor market.

Cook’s plea described how several Apple DACA employees were brought into the United States illegally, yet he also said the migrants “have done everything right … [and] follow the rules.”

For example, the plea suggested that there is no moral distinction between Americans and foreigners that company executives are bound to respect, saying, “one of Apple’s core values is the belief that equal opportunities should be available for all, regardless of background.”

“In their patriotism, dedication to their families and communities, and commitment to making their country a better place, they are as American as any of us,” the plea said.

Cook lauded the migrants’ claimed “rich diversity” without defining diversity, and ignored the trade-offs between a demand for a “diverse” workforce and a most-skilled workforce:

Our recipe for success is simple: Hire the best people, from the most diverse backgrounds. They will solve the most challenging technological problems. They will find new ways to connect to the broadest population and new ways to provide the best customer experience. This is Apple’s innovation strategy. It is all about the people—and their rich diversity.

Cook did not mention the fact that the company can hire foreign workers — including former illegals — via the nation’s guest-worker and immigration programs. For example, the L-1 visa allows Apple executives to hire illegals back in their home countries and transfer them to U.S. locations. Executives can also get green cards and citizenship for their L-1 and H-1B visa workers.

The federal date presented by MyVisaJobs.com suggests the company hired more than 2,000 foreign workers via the H-1B program and asked for green cards for another group of roughly 2,900 visa-workers. Almost 2,500 of the green-card recipients were H-1B workers, and 239 held L-1 visas which allows foreign-based employees of Apple to work in the United States

The vast majority of the imported workers came from India, according to the website: 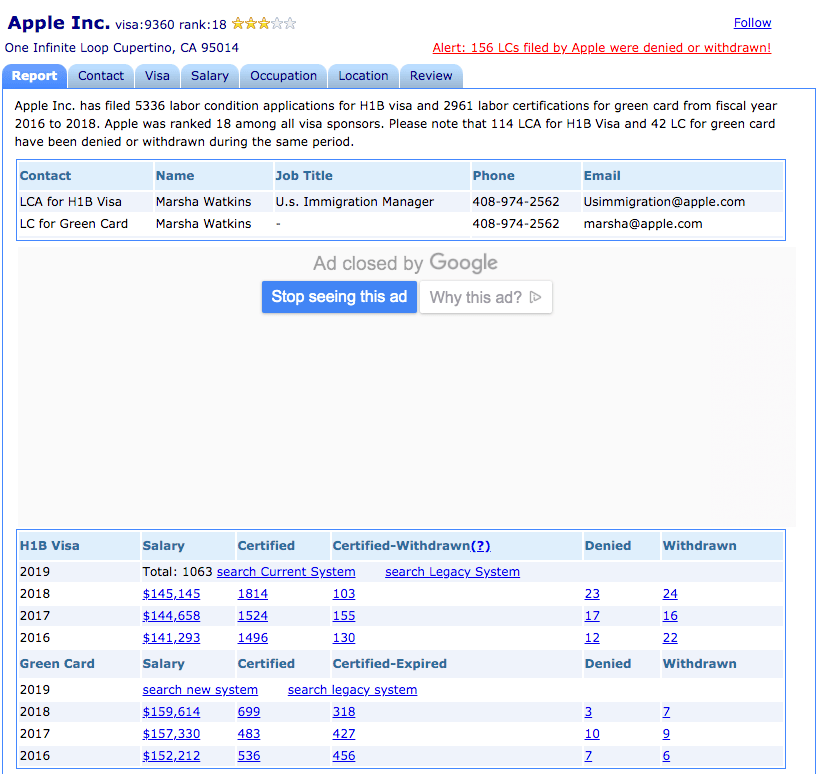 “Dreamers fuel creativity, broaden knowledge, and help drive innovation,” Cook says. “They inspire all of us. They make Apple better. They make our country better.”

The case is Department of Homeland Security v. Regents of the University of California, at the Supreme Court of the United States. The cases are numbered Nos. 18-587, 18-588, and 18-589.