More than 50 pro-life leaders have sent a letter to Secretary of Health and Human Services (HHS) Alex Azar that urges all public health officials to halt the promotion of abortion as the nation responds to the coronavirus crisis.

The letter reads that many Americans are “rising to the challenge” of doing all they can to prevent the spread of the coronavirus that originated in China.

“Unfortunately, there is one clear outlier – the abortion industry, including the largest abortion chain in the nation, Planned Parenthood,” the national pro-life leaders state, adding:

In acts of manifest fearmongering and self-interest, they are exploiting the anxiety of women and couples by continuing to promote abortion in communities across the country. Planned Parenthood is responsible for nearly 346,000 abortions in the last reporting year, including both surgical and medical procedures carried out in many locations all the way to 24 weeks of pregnancy. By ceasing both surgical and chemical abortions now, Planned Parenthood will free up much needed medical equipment and decrease the demand placed on ER’s due to complications from both medical and surgical abortion. This will protect women who will, without doubt, need follow-up care, including infection treatment and transfusions, from the nation’s emergency care centers and hospitals.

The pro-life leaders urge Azar to note that the abortion industry “is compounding one crisis with another”:

Therefore, we urge public officials to use their broad emergency authority to safeguard against the extreme abortion agenda by:

During the coronavirus crisis, however, Planned Parenthood has refused to stop abortions, even when ordered to do so.

Abortion is essential for people’s health and wellbeing. That’s why clinic doors are staying open. https://t.co/lv55KmompW

In August 2017, the Charlotte Lozier Institute (CLI), the research arm of the Susan B. Anthony List, demonstrated the extent of taxpayer-funded Planned Parenthood’s business prowess in promoting its primary money-making service – abortion.

CLI released a paper that showed Planned Parenthood obtains 35 percent of the U.S. abortion market, a percentage that well overtakes the market shares of leaders in other industries.

“In 2015, Planned Parenthood performed more than one third (35.4%) of all the induced abortions in the U.S.,” wrote Charlotte Lozier Institute (CLI) President Chuck Donovan and Dr. James Studnicki, CLI’s vice president and director of Data Analytics.

The authors compare Planned Parenthood’s share of the U.S. abortion market to the market shares of leaders of other industries: 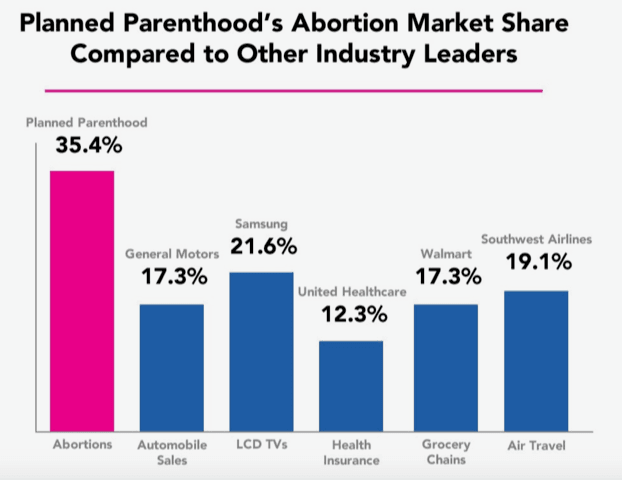 “The level of market dominance for abortions demonstrated by Planned Parenthood could be taught in business schools as the ultimate example of strategic planning and execution,” Donovan and Studnicki asserted. “It is a defining activity.”

Additionally, the authors found that Planned Parenthood depends primarily on its abortion-centered business model – and is not a significant provider of medical care in the United States, despite its self-promotion as an “irreplaceable” and “life-saving” healthcare provider.

The report observed that Planned Parenthood provides less than 1.4 percent of the nation’s HIV tests and less than 1 percent of pap tests, and that, within the five-year period prior to the release of the paper, the abortion chain’s service-to-client ratios for breast exams and pap tests had declined by 37 percent.

In its most recent annual report, Planned Parenthood revealed its organization performed a record high number of abortions while it also received record high taxpayer funding during the same period.

Yet, Democrat leaders have continued to push for more funding for Planned Parenthood as they hold up federal assistance to Americans and small businesses during the crisis.