Roughly 450,000 foreign-born illegal immigrants are getting college degrees, so they need taxpayer funding and work opportunities, according to an alliance of advocates for Mike Bloomberg and for hundreds of colleges and universities.

“This new report shows that many more undocumented students are enrolled in higher education than originally reported,” said an April 15 statement from Teresita Wisell, a vice president at Westchester Community College in New York. Her college is one of many education centers that can sell education services to illegal immigrants.

“Our communities and our nation need these students more than ever,” claimed Miriam Feldblum, the executive director of the college advocacy group that counted the population of illegal immigrant education consumers. “Congress [must] prioritize legislation that removes barriers for existing students and expands opportunity for future cohorts [of illegal students],” Feldbaum said in the April 15 statement, amid the massive lays-offs of American college graduates cased by China’s Wuhan virus.

“We call on all states to grab this opportunity and expand their state admissions, tuition, and financial aid policies to all students, regardless of immigration status,” said Andrew Lim, a research director for Mike Bloomberg’s pro-migration group, titled New American Economy.

Bloomberg’s group helped write the study with Feldbaum’s group, which lobbies for several hundred colleges and is titled The Presidents’ Alliance on Higher Education and Immigration.

But the report provides interesting clues about the rising share of illegal immigrants who are getting taxpayer-funded education to train for the jobs needed by American graduates. For example, according to the report:

A majority of the 450,000 come from five states — California, Texas, Florida, New York, or Illinois — and 82 percent of the 450,000 illegals are enrolled in taxpayer-run schools.

The California numbers suggest that up to 33 percent of the 450,000 migrants are enrolled in four-year colleges, from where they can get jobs as managers, engineers, recruiters, scientists, or architects, or they can continue their education to become licensed professionals.

10 percent of the illegal migrants are in post-graduate courses that do allow them to become doctors, lawyers, or other license-protected professionals.

The report comes as pro-migration groups try to raise the inflow of foreign college graduates into the U.S. jobs needed by the American middle-class.

Any increase in the illegal population of college graduates is a double benefit for the investors who are trying to create and sell new company shares on Wall Street. The illegal workers inflate the apparent value of the shares by reducing each company’s payroll costs and by inflating the consumption of the company’s services and goods.

But any increased supply of labor is a problem for the roughly 150 million Americans who make their living from wages and salaries. Amid the extra immigration, their salaries and wages are cut, their rents, housing prices, and commutes are increased, and their children’s’ schools are reorganized to teach children from foreign cultures.

Wealthy U.S. investors have been leading the push to accelerate the inflow of foreign college graduates. In 2013, for example, the Senate’s “Gang of Eight” amnesty bill included a rule that would have exploded the supply of foreign graduates for white-collar jobs by allowing U.S. universities to “staple” green cards to the diplomas earned by their foreign customer-students.

Similarly, in 2019, Utah GOP Sen. Mike Lee pushed for passage of his S.386 bill that would have offered green cards to roughly 60,000 Indian graduates per year if they took white-collar jobs in the United States.

Similarly, Feldbaum’s group has allied with wealthy investors to defend two programs that annually allow up to 300,000 foreign graduates and students to take good jobs from American graduates.

U.S colleges earn up to $40 billion a year from the roughly 300,000 foreign graduates and students who enroll in U.S. colleges to get work permits via the little-known Occupational Practical Training and the Curricular Practical Training (CPT) programs.

Thousands of foreign students use the OPT and CPT programs to get elite jobs at Intel, Google, Facebook, Amazon, Microsoft, and many other companies — even though U.S. graduates are ready to take those jobs. Moreover, any of those jobs, say U.S. graduates, are awarded by foreign-born managers to people from their own national networks.

The presidents of more than 400 state and private universities have formed a quiet partnership with a top-level group of wealthy investors to help foreign graduates, even though the same alumni will take prestigious jobs from the American graduates of those institutions.

Officials at the Presidents’ Alliance on Higher Education and Immigration refused to answer questions from Breitbart News about the conflicts of interest posed by their anti-American alliance with the West Coast investors at FWD.us.

The FWD.us lobby group was created in 2013 by wealthy investors to help boost the inflow of visa workers and legal immigrants into the United States via the 2015 “Gang of Eight” amnesty. The foreign workers raise stock market values by serving as cheaper workers — including software programmers and delivery drivers — and also as consumers and apartment renters.

Collectively, these programs have helped minimize salary growth for U.S. graduates for the last two decades. For example, the average starting wage for recent U.S. life-science graduates is roughly $30,000 per year, even for the graduates of very selective colleges, according to the pro-migration Economist magazine: 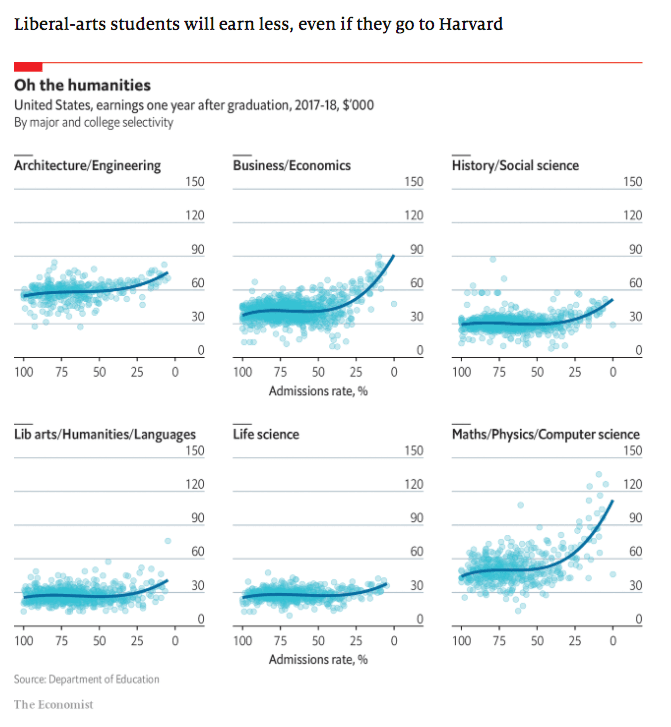 Feldbaum’s group is supported by a variety of elite universities, including Harvard, Princeton, American University, Bard College, Georgetown University, and George Washington University. It is also backed by many lower-status state colleges who would gain extra tuition if the government provides tuition for illegal aliens in the United States.

The joint report is designed to help business groups lobby legislators, and it offers nothing to the many American graduates who need higher wages to help them get economically stable, pay their college debts, get married, buy homes, and raise families.

“Many undocumented students [are] actively training to fill critical skills shortages in health, STEM, teaching, and business fields,” Wisell said in the April 15 statement announcing the report. “Now more than ever, we can and must support these students in every way,” she added, as millions of American graduates lost their jobs amid the economic crash.

The 450,000 illegal migrants enrolled in colleges likely represent the next wave of illegal aliens for the Democrats to champion.

Feldbaum’s group repeatedly compares the 450,000 migrants to the roughly 700,000 migrants who got work permits in 2012 from President Barack Obama’s Deferred Action for Childhood Arrivals (DACA) amnesty. “There are more than 450,000 undocumented students enrolled in postsecondary education … Of these students, 216,000 are DACA-eligible (they either hold DACA or would have been eligible for DACA),” said the report.

Breitbart News has extensively covered the rising inflow of foreign college graduates, but that inflow has mostly been ignored by Jeff Bezos’s Washington Post, the New York Times, and The Wall Street Journal.

The establishment outlets carefully cover the concerns of the many blue-collar and white-collar migrants who are seeking jobs in the United States.