President Trump has lost ground with his base of voter support, white Americans, in swing states while not increasing his support with Hispanic and black Americans, New York Times/Siena College polls show.

The polls of six battleground states, released this week, come as racial tensions have swept the nation with the Black Lives Matter movement leading riots, protests, and the destruction of historical monuments in major cities.

Conservative circles have speculated that voters may not be expressing their actual opinions to pollsters.

Trump’s administration has been laser-focused on messaging specifically to black Americans, with daily social media posts from the president, the Republican National Committee (RNC), and the White House.

“We did criminal justice reform. Nobody thought it was possible to get it done, I got it done,” Trump said in a recent interview with Fox News host Sean Hannity, referring to the First Step Act.

In other posts, the RNC has slammed Democrat presidential nominee Joe Biden for his support of anti-crime legislation in the late 1980s and 1990s.

“Biden claims to help black Americans— but his record on crime led to mass incarceration,” the RNC wrote in an online post. “In 1986, Biden pushed the Anti-Drug Abuse Act — which established racial disparity in sentencing. The bill shifted the federal release program ‘from a rehabilitative focus to a punitive one.'”

Despite the aggressive campaign, the polls show little-to-no movement among minority voters switching from Biden to Trump, the Times reports:

Over all in the battlegrounds, Mr. Biden leads among black voters by 83 percent to 7 percent, up only slightly from October. Hispanic voters back Mr. Biden by 62-26, also essentially unchanged. Neither lead exceeds Mrs. Clinton’s margin in the final polls from 2016. [Emphasis added] 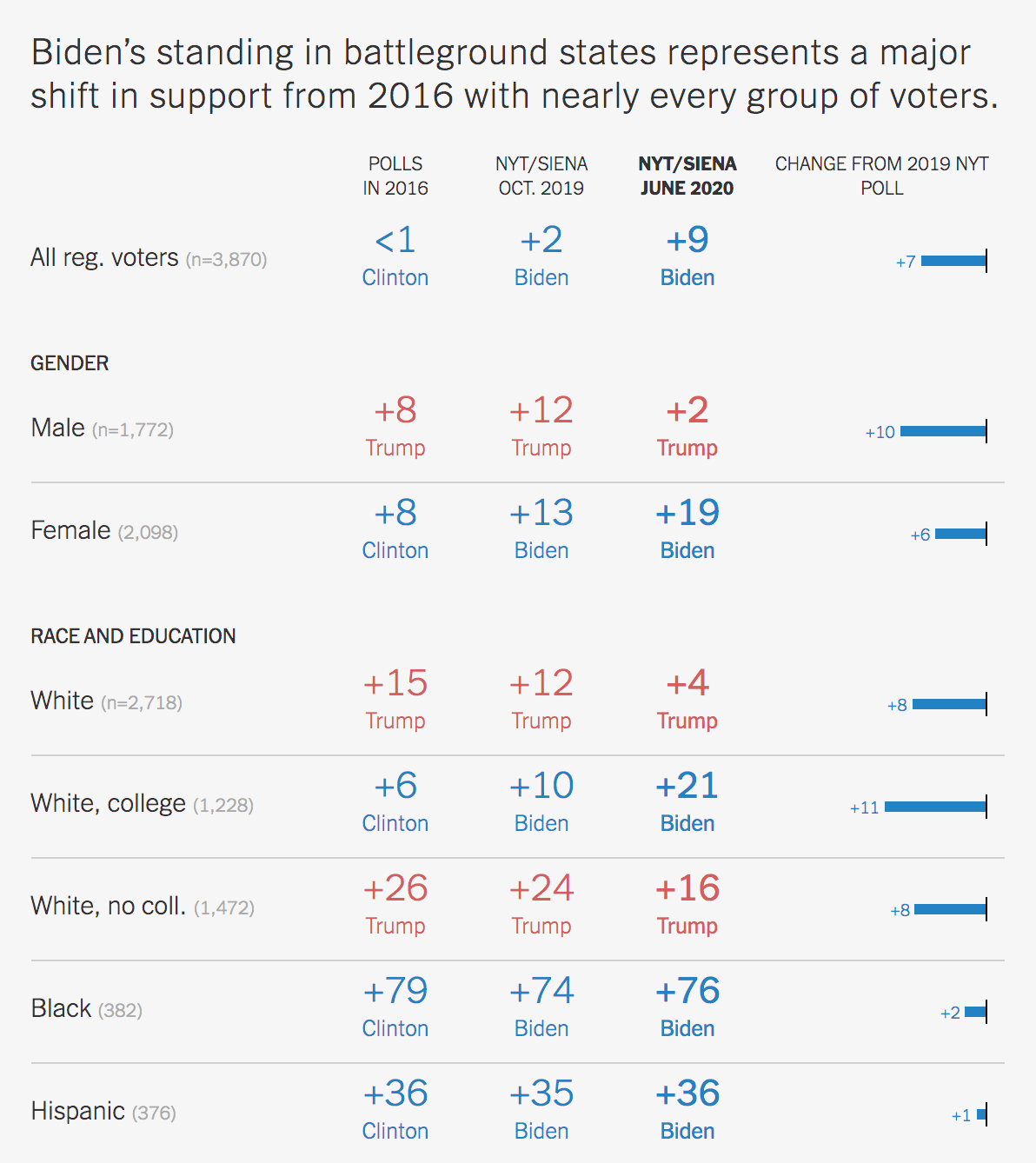 In 2016, for instance, Trump led non-college-educated white voters by 26 percentage points against Democrat Hillary Clinton. By 2019, that base of support had decreased by only two percentage points.

Today, amid societal and civil unrest, Trump’s margin with non-college-educated white voters has dwindled to just a 16-percentage point gap.

The exodus of white voters from the G.O.P. has been especially pronounced among younger voters, an ominous trend for a party that was already heavily reliant on older Americans. [Emphasis added]

Biden, on the other hand, has hugely increased his support among college-educated white voters. In 2016, Clinton led with the group by just six percentage points. Today, the polls show Biden has widened that gap, leading by 21 percentage points.