Without discussing it with one of the two presidential campaigns, the corrupt Commission on Presidential Debates (CPD) decided the second debate between President Donald Trump and former Vice President Joe Biden would be a virtual debate.

By October 15, the scheduled date of the second debate, Trump would have been many days beyond the 10 to 14 day recommended quarantine period after contracting the coronavirus.

But rather than “listen to the science,” the corrupt CPD decided to aid and abet Joe Biden’s desire to sit on his polling lead and not jeopardize it with a live debate.

Then, as if to prove how truly corrupt they are, the CPD canceled rather than rescheduled the second debate for a later time — you know, a time when the debate could be an in-person with no qualms whatsoever.

Critics of the CPD are labeling these decisions as “unilateral,” as though the Biden campaign was not consulted. For my money, “bilateral” is a more appropriate description.

The CPD claims it did not discuss any of this with the Biden campaign and I don’t fucking believe them.

I mean, already the CPD was a thoroughly corrupted institution smart Republicans had grown suspicious of. Not all Republicans. There will always be our Vichy Republicans who put “protecting norms” and the affection and acceptance of the national media above what they know to be true.

Nevertheless, the Vichies cannot explain away the facts of the past.

The CPD is, after all, the corrupt institution that gave us Candy Crowley and Chris Wallace… But never a Brit Hume or Bret Baier.

Funny how that works.

Anyway, now that the CPD is exposed like a vampire yanked into the sun, let’s hope the 2024 GOP nominee has the Trump-sized stones necessary to tell this rotting institution to shove it up its ass. Which brings me to Steve Scully.

Yes, something else the writhing corpse of the CPD tried to sucker-punch us with was Steve Scully.

I ask you, how corrupt does the CPD have to be to stick us with a debate moderator who interned — actually interned — with one of the debate participants? Do you even need to ask which participant Scully interned with? Of course, you don’t because when it comes to audacious conflicts of interest, it is always you and I who are told suck on it and die.

Yes, it’s always you and I who must be soothed and reassured by the CPD and the fake media and the Vichies that whatever version of Steve Scully is forced upon this, this Steve Scully is an “honorable” man and a “journalist” in the “finest tradition.”

It’s always us being told to trust in the “honor” and “professionalism” of the person chosen by the CPD to interrogate our presidential choice, no matter how glaring the conflict of interest, even if it’s a goddamned internship…

And then it’s always us — after the one-sided debacle ends — left with nothing but a Toldjaso! after it’s too late.

Funny how the corrupt CPD never puts itself in a position to have to soothe Democrat fears, to have to ask Democrats to “trust” in the “honorable” moderator who interned at Trump Tower, or who interned for Mitt Romney or John McCain.

And look at what we have in Steve Scully… the oh-so “honorable” and “professional’ Steve Scully… A guy who on three separate occasions has blamed tweets he regrets on a hacker:

How deep of a hole from common sense do the Vichy Republicans have to bury themselves in to buy the absurd idea Steve Scully’s Twitter account has now been hacked three times?

How deep of a hole to ignore Steve Scully tweeting out “No, Not Trump, Not Ever”? 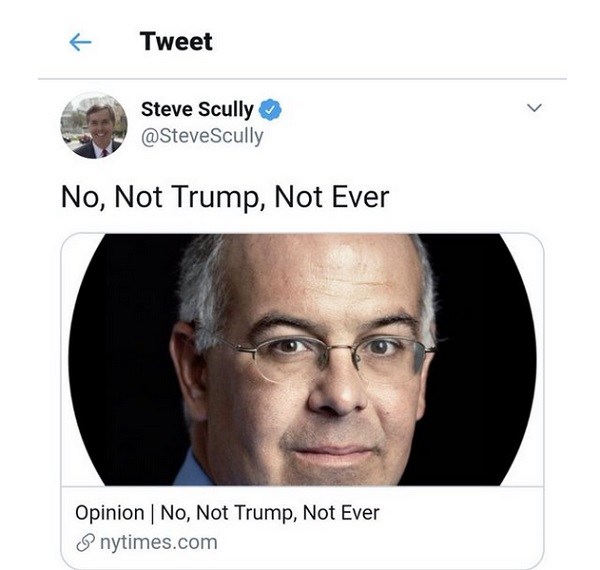 How deep of a hole to buy that someone hacked his Twitter account for a third time  — a third time — last week and tried to destroy his reputation — oh, not with a tweet that blared Trump Sucks! or Trump Eats Babies! or I’m with Joe! or Watch Me Destroy Trump at the Debate Next Week!

This so-called hacker sought to frame this “extraordinary man of integrity” with a cryptic tweet that said, “@Scaramucci should I respond to trump.”

And then this malevolent genius of a hacker was apparently able to hack into Trump-hater Anthony Scaramucci’s account to further the scheme… Because, if you happened to notice, Scaramucci didn’t respond to Scully’s inquiry with a Whuh? or I’m not sure what you mean? or Respond to what?

No, no, no, no… Scaramucci responded as though he and the “honorable” Steve Scully were right in the middle of a conversation: “Ignore. He is having a hard enough time. Some more bad stuff about to go down,” Scaramucci tweeted in reply.

So not only did Scully get hacked for a third time, the hacker is such an evil genius, he made it look like Scully screwed up and posted something publicly instead of through Twitter’s direct message.

Oh, oh, oh, and if that’s not convincing enough for you about the rot and corruption throughout all of this, C-SPAN, which seems eager to go down with the USS Scully, assures us their guy Scully has reached out to the “authorities.”

The FBI or an authority on baking your own bread with a Bic lighter?

There are all kinds of “authorities” out there.

Where is this “honorable” and “professional” man’s willingness to risk a felony to report the hack?

Even Jussie Smollett was willing to do that.

Hey, are we not talking about meddling in a presidential election?

So where’s the FBI?

America’s political and media institutions are all corrupted beyond redemption. Watching C-SPAN, Scully, and the Commission on Presidential Debates get tossed on this rotting pile puts a smile on my face and a song in my heart.