The DCCC, led by chairman Sean Patrick Maloney (D-NY), hired Tatro, a former New York gang member, to serve as a senior adviser for “diversity and inclusion.” He served time for “shooting two rival gang members in 2006” and was also convicted in 2011, serving six years for racketeering conspiracy, according to the New York Post.

According to the outlet, Tatro “confessed to the shootings, and to a ‘razor slashing’ of another victim in 2002 as well as to dealing drugs,” making around $12,000 per month doing so.

The DCCC has vehemently defended its decision to hire him, praising him for turning his life around. He, notably, appeared in the 2019 documentary series College Behind Bars, where inmates “seek college degrees – and a chance at redemption – while incarcerated.” He earned his bachelor’s degree through the program.

The DCCC has forcefully defended its new hire, describing Tatro as someone who “has worked hard to change the trajectory of his life through education and service to his community.”

“He has served his time for the crimes he committed and is now a national leader in the bipartisan movement to reform our criminal justice system and bring meaningful improvements to the education system in American prisons,” a DCCC spokesperson said.

“Such critical work breaks cycles of recidivism by making sure more people leave prison with the skills to hold down a job and contribute to their communities,” the spokesperson added.

The Post notes that Maloney, the DCCC chair, is familiar with Tatro, as the former gang member worked on his campaign in the past. A quick look at Tatro’s work history on Facebook shows that he worked as a policy adviser for Maloney’s campaign from June 2018 to September 2018, advising Maloney on issues related to criminal justice.

Social media activity also shows the two having a friendly relationship. In March 2019, Maloney, whose official Instagram username is ny18spm, “liked” a shirtless Instagram picture posted by Tatro. The caption read, “Something for you to wake-up t0” and included various hashtags, including “saturdayvibes,” “mood,” and “handsome.” [Editor’s note: Tatro’s post was deleted shortly after the publication of this article. Breitbart News has replaced the original post with a screenshot of the post below.] 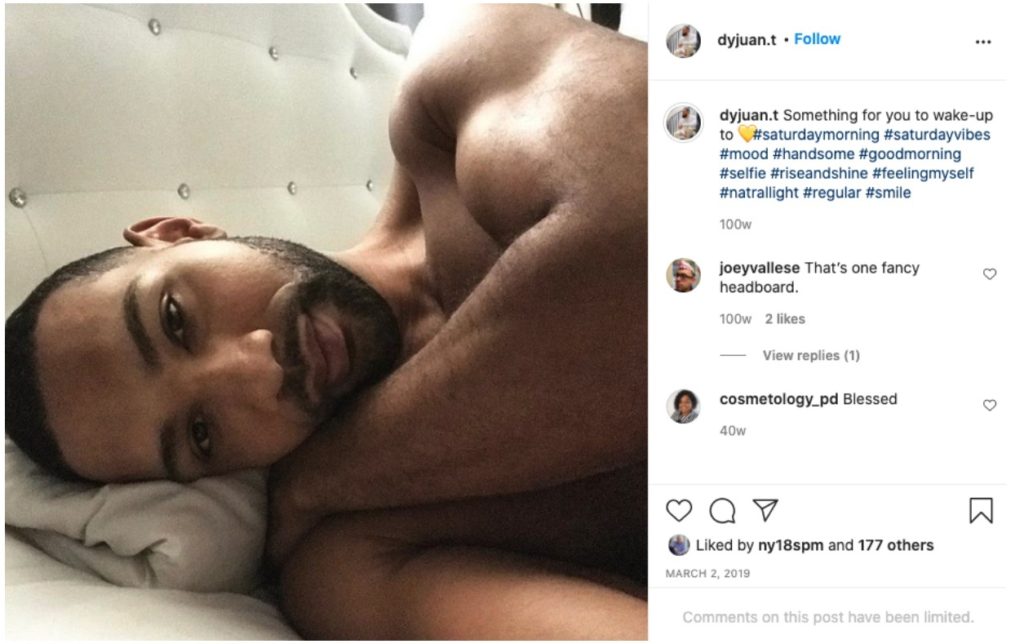 Other social media posts spanning back to 2018 and 2019 show Tatro attending Christmas parties, one at the home of Randy Florke, Maloney’s husband.

“Thank you to @spmaloney and @RandyFlorke for throwing such a great party last evening in their beautiful home.
@AFelishAdams it is always a pleasure to spend time with you. And to my guys, we have come a long way,” he wrote in 2018:

Thank you to @spmaloney and @RandyFlorke for throwing such a great party last evening in their beautiful home. @AFelishAdams it is always a pleasure to spend time with you. And to my guys, we have come a long way. pic.twitter.com/OuBprJv4iS

“Spent a very special Xmas, with family, at my good friend @randyflorke’s home two years ago,” he wrote in a December 24, 2019 post. “It’s was one of the best I ever had. Merry Xmas to you all. I hope you surround yourselves with friends and family.”

“It’s certainly on-brand for criminal-coddling Democrats, but the rest of America will find it disturbing that a murderous gang member is holding a prominent position with the DCCC,” Langworthy said in a statement, per the Post.

“Second chances are one thing, but I would have to question Congressman Maloney’s judgment to put someone with such a violent past at the top of their organization,” he added.

The Post’s report drew a sharp response from DCCC communications director Cole Leiter, who appeared to take issue with the outlet accurately describing Tatro’s past:

Then @DCCC hires him after he becomes a national leader in a bipartisan movement to reform prison education systems.@NYPost publishes trash headline. https://t.co/R0eYQSPEhC

Tatro also took to social media on Monday morning and declared it a “great day to hire a formerly incarcerated person.”

Today is a great day to hire a formerly incarcerated person.

Stonewall Democrats of NYC, which describes itself as New York’s “largest LGBTQ Dem club,” also praised the news of the DCCC’s hire.

“.@DyjuanTatro recently & deservedly became an advisor at the @dccc. That’s because he represents the future of the Democratic party, particularly for LGBTQ communities,” the group declared:

.@DyjuanTatro recently & deservedly became an advisor at the @dccc. That's because he represents the future of the Democratic party, particularly for LGBTQ communities.

Our party needs to center POC, real criminal justice reform, and restorative justice. The NY post is a sham!