Florida Gov. Ron DeSantis (R) expressed support for Cubans who took to the streets nationwide on Sunday demanding the end of the communist regime.

DeSantis posted on Twitter sharing a video of the protests, which news outlets estimate attracted thousands of people:

Florida supports the people of Cuba as they take to the streets against the tyrannical regime in Havana. The Cuban dictatorship has repressed the people of Cuba for decades & is now trying to silence those who have the courage to speak out against its disastrous policies #SOSCuba

Florida supports the people of Cuba as they take to the streets against the tyrannical regime in Havana. The Cuban dictatorship has repressed the people of Cuba for decades & is now trying to silence those who have the courage to speak out against its disastrous policies#SOSCuba pic.twitter.com/H71EYoKdUZ

“The protests appeared to begin in the town of San Antonio de los Baños, western Cuba, on Sunday morning. Local independent outlets documented chants of ‘down with communism!’, ‘they [the regime] must leave,’ and ‘fuck Díaz-Canel!’, among other anti-government statements,” Breitbart News reported. Locals livestreamed the protest on Facebook, triggering an outpouring into the streets of at least 16 major cities including both Havana and Santiago de Cuba, on opposite ends of the island. 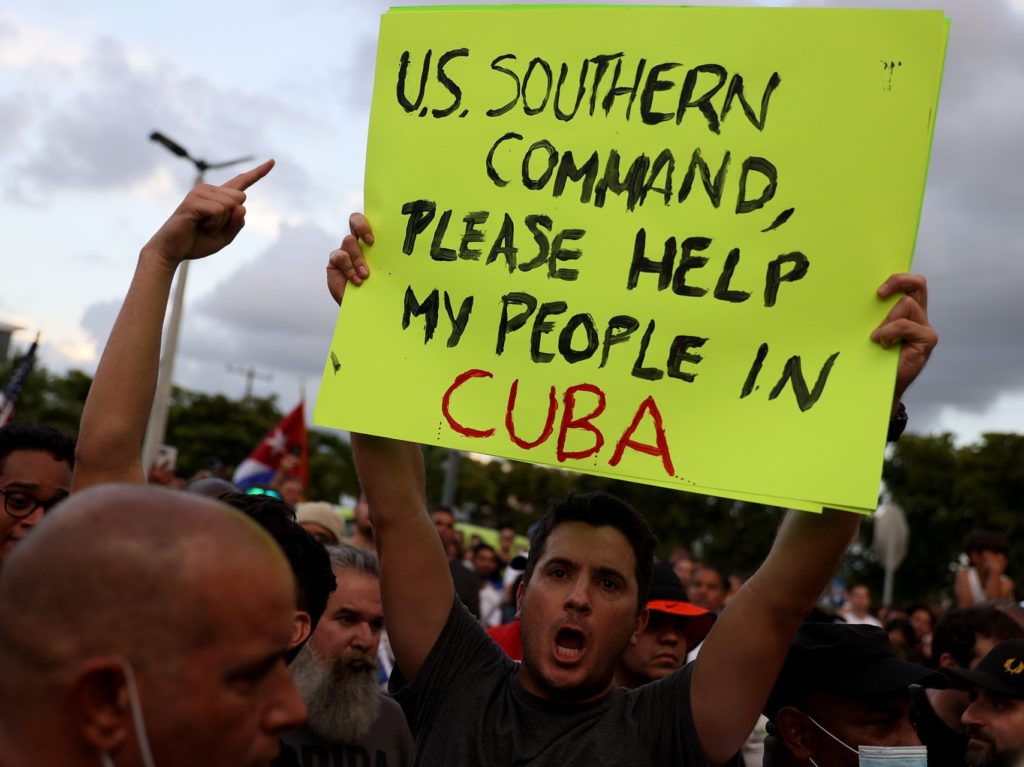 Protesters gather in front of the Versailles restaurant to show support for the people in Cuba who have taken to the streets there to protest on July 11, 2021 in Miami, Florida. (Joe Raedle/Getty Images)

Miami Mayor Francis Suarez held a news conference to address the protests and “called for international intervention led by the United States ‘to protect the Cuban people from a bloodbath.”‘

“Cubans are worthy and ready to rule themselves without tyranny,” the mayor said. “It can end today, and it must end today. The implications of this moment can mean freedom for millions of people in the hemisphere from Nicaraguans and Venezuelans and so many more.”

So far, local outlets in Cuba are estimating hundreds of arrests. Bystanders “recorded the sound of heavy gunfire in Havana and public beatings of dissidents. Miguel Díaz-Canel, the ‘president’ appointed by Raúl Castro to be the face of the still-ruling Castro Communist Party, called for street ‘combat’ against anyone demanding an end to the regime in a speech on Sunday,” Breitbart News reported.

Instead of rallying in support of Cubans, Democrats on Twitter largely criticized DeSantis for the anti-riot bill he signed into law in April, which increases penalties for people who participate in unruly protests. DeSantis passed the bill in response to Black Lives Matter protests that devolved into violence and looting in major cities across the nation last summer.

“I support the Cuban people as they take to the streets & let their voices be heard & do everything they can’t do in Florida without it being labelled [sic] an ‘aggravated riot’ under Ron Desantis’s anti-protest law,” State Rep. Omari Hardy (D-FL) wrote.

“@GovRonDeSantis made this type of protest illegal in Florida. He wants to silence dissent because he fears accountability,” tweeted Steve Simeonidis, who is the chair of the Miami-Dade Democrats.

Fascinating strategy from a number of Florida Dems. Instead of supporting protestors in Cuba, they’re trying to argue DeSantis’s anti-rioting law would’ve prevented similar protests. It wouldn’t have, but a good window into why they’re losing the voters they’re losing.

Notably, Black Lives Matter was founded by “trained Marxists.” Marxism is the philosophical underpinning of communism, the ruling political system in Cuba, and has resulted in the deaths of at least 100 million people over several decades.