Hundreds of Afghans are headed to various states for permanent resettlement, including Texas, Florida, Pennsylvania, and Arizona, among others.

Refugee contractors are working to quickly resettle tens of thousands of Afghans that President Joe Biden’s administration is fast-tracking into the U.S.

While many are landing at Dulles International Airport in Virginia, they are dispersing throughout the nation. Virginia Gov. Ralph Northam (D) said this week that more than 6,000 Afghans have flown into Dulles airport awaiting resettlement. 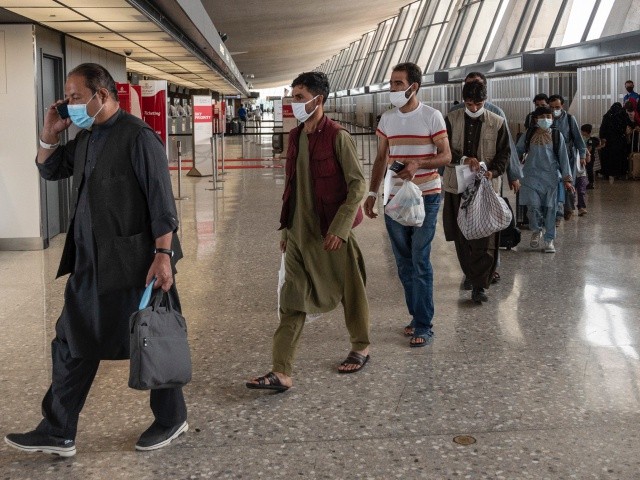 In Texas, refugee contractors have said they will resettle at least 300 Afghans across the state, according to Newsweek:

Mark Hagar, a director with Refugee Services of Texas, told Newsweek that the agency will resettle over 300 Afghans across the state in the coming weeks. [Emphasis added]

Normally, he would get one or two weeks’ notice that families are arriving in the cities where they will be resettled, but that hasn’t been the case lately. “We’re getting probably sometimes 24 or 48 hours,” he said. “But we’re able to do it because we have the staff, the volunteers, partners … they all work together to make it happen.” [Emphasis added]

Likewise, Arizona is expected to resettle many Afghans, according to refugee contractors who spoke to KSBY6 News:

“We greet them at the airport, we assist them by setting up an apartment for them, by helping them find jobs, enrolling their children in school, doing education around our culture, teaching the English language, helping them learn about transportation, and just settling into life in the United States,” said Phillips. [Emphasis added]

Right now, Phillips said she does not know how many refugees her organization will help resettle in Arizona. The number of people seeking Special Immigrant Visas, though, is unprecedented for modern times.
[Emphasis added]

In addition, Afghans are being resettled in Philadelphia, Pennsylvania, according to the Associated Press, while New Jersey Gov. Phil Murphy (D) has said Afghans will be resettled in his state as well. Busloads of Afghans, according to NJ.com, have already started arriving in New Jersey.

Jacksonville, Florida, is set to see an influx of Afghans resettled in the region. News 4 Jax reported this week that “dozens are en route to Jacksonville, though the exact number is not known,” stating:

At least 150 of the refugees waiting to be evacuated from Afghanistan will be coming to Jacksonville. Catholic Charities Jacksonville Associate Director Matt Schmitt said they’ll arrive as early as Sept. 1. [Emphasis added]

As Breitbart News reported this week, the Biden administration is drastically expanding the eligibility for Afghans to come to the U.S. Once believed to be a small-scale resettlement of Afghans who worked as interpreters directly for the U.S. Armed Forces in Afghanistan has now become a global migration effort for tens of thousands of Afghans, and potentially hundreds of thousands. 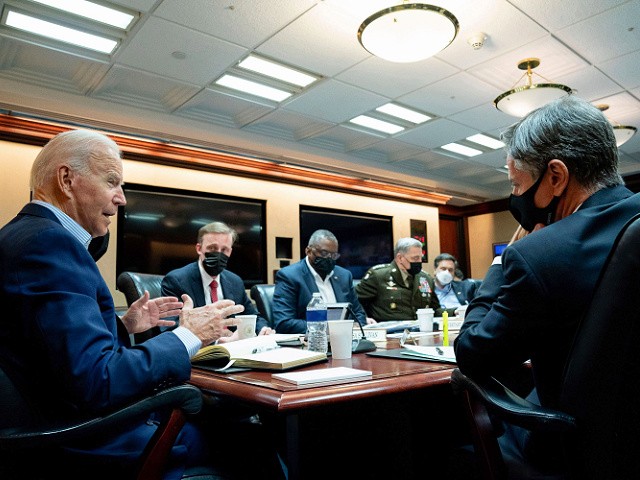 In this handout photo provided by the White House, President Joe Biden meets with his national security team for an operational update on the situation in Afghanistan on August 22, 2021 at the White House in Washington, DC. (The White House via Getty Images)

This week, for example, Biden announced that the Department of Homeland Security (DHS) would use its authority to provide thousands of Afghans with “humanitarian parole” to come to the U.S. These are Afghans who do not qualify for Special Immigrant Visas (SIVs), refugee status, or the newly created P-2 visa.

Potentially 50,000 Afghans could be given humanitarian parole to arrive in the U.S.