American multinational telecommunications giant Verizon has been pushing Critical Race Theory (CRT) on its employees by teaching the United States is a deeply racist nation fueled by the equally racist economic system of capitalism, according to a report in City Journal.

While Verizon has been open and public about its various social justice initiatives, the extent of what the company believes and teaches to its employees was revealed by an anonymous whistleblower, who shared with reporter Christopher Rufo a variety of internal documents that painted an extreme picture. From the report:

According to documents that I have obtained from a whistleblower, Verizon launched the “Race & Social Justice” initiative last year and has created an extensive race reeducation program based on the core tenets of critical race theory, including “systemic racism,” “white fragility,” and “intersectionality.”

In the flagship “Conscious Inclusion & Anti-Racism” training module, Verizon diversity trainers instruct employees to deconstruct their racial and sexual identities and, according to their position on the “privilege” hierarchy, embark on a lifelong “anti-racism journey.” Employees are asked to list their “race, ethnicity, gender, gender identity, religion, education, profession, and sexual orientation” on an official company worksheet, then consider their status according to the theory of “intersectionality,” a core component of critical race theory that reduces individuals to a network of identity categories, which determine whether they are an “oppressor” or “oppressed.”

Verizon then instructs employees on the firm’s elaborate racial-etiquette system, warning them against committing "microaggressions" and "microinequities." Members of the privileged classes must engage in the "lifelong process" of "accountability with marginalized individuals." pic.twitter.com/hGz0Tqq8zd

One video presentation reportedly about “privilege” shared with Rufo featured Verizon’s then-Global Chief Diversity, Equity, and Inclusion officer Ramcess Jean-Louis (now with Pfizer) explaining how black people in America are viewed as “less than” and “inferior.” 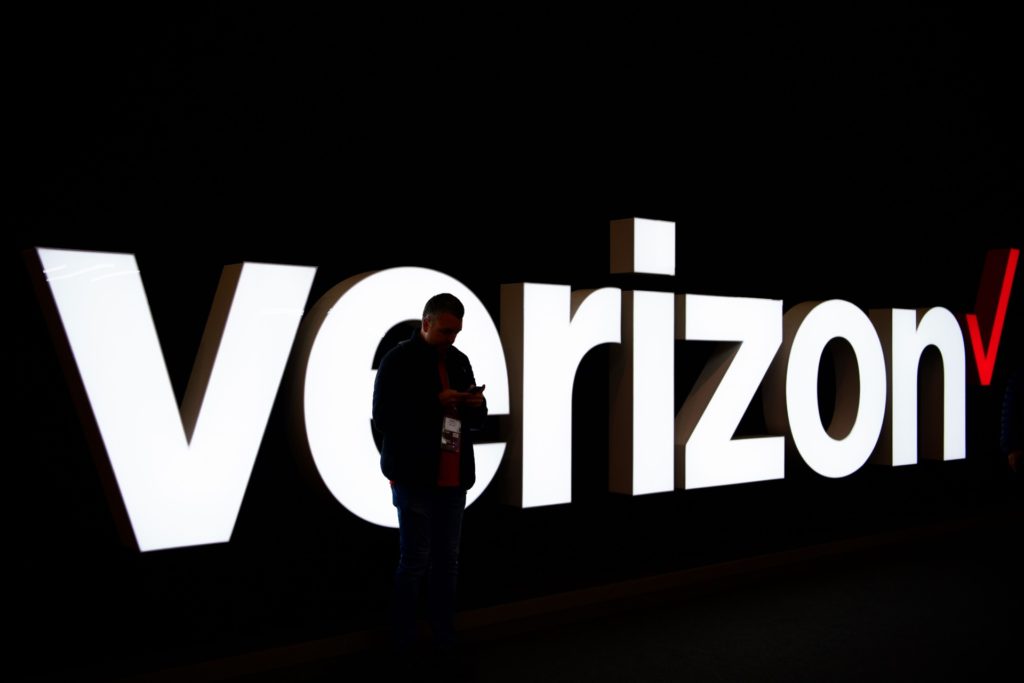 A man stands in front of the Verizon logo at the Mobile World Congress (MWC) in Barcelona on February 25, 2019. (GABRIEL BOUYS/AFP via Getty)

In the next phase of this “training,” Verizon then shared instructed its employees on how to best partake in conversations about race and oppression without committing “microaggressions” and “microinequities,” which the company defined as “‘indirect expressions of racism, sexism, ageism, ableism, or another form of prejudice’ that are ‘seemingly innocuous and often ‘unconscious or subtle,’ but make members of certain racial and sexual classes ‘feel different, violated, or unsafe.'”

Taking its cues from the 1619 Project, the company’s #Next20 education series that featured Verizon vice president David Hubbard interviewed Khalil Muhammad, great-grandson of former Nation of Islam leader Elijah Muhammad, who lectured on the evils of teaching concepts like “American exceptionalism.”

During his presentation, called American History 101, Muhammad argued that America is fundamentally racist and needs a “new origin story,” replacing the narrative of “American exceptionalism” with the narrative that America was founded on “systems of racism” that remain at the root of our society. Muhammad argued that the Founding Fathers built a slave economy and that “this early version of global capitalism” produced the “economic incentives” that prevail to this day, with modern corporations “exploiting poor people in low-income communities” in a similar way to the slaveowners of the past. “This isn’t just Marxist talking points,” Muhammad said. “It’s just the fact.”

Later in the discussion, Muhammad claimed that the current American police force is designed to maintain a “two-tier society,” enforce geographic segregation, and protect the “wealth gap” between white and black Americans. The raison d’être of policing, Muhammad said, is to “make sure that kids are locked up,” “make sure that people stay in their communities,” and “make sure that they’re criminalizing poverty”—what he called “the bread and butter of systemic racism.” Black crime statistics showing that black Americans commit crimes disproportionately, Muhammad contended, “are themselves an expression of systemic racism,” used to establish “the collective guilt of black people” and to “[justify] inequality and racism and discrimination.”

In another #Next20 conversation, Verizon invited activist Adrian Burrell to offer a solution to this systemic racism: defund the police.

“I feel like over-policing doesn’t work. And I feel like those same resources that are aimed towards hiring [police officers] with racist biases . . . need to be aimed at bringing more resources to the community at a root level, and then you just won’t need so many police,” Burrell reportedly said.

Muhammad argued that the Founding Fathers built a slave economy and that "this early version of global capitalism" produced the "economic incentives" that prevail to this day, with corporations "exploiting poor people in low-income communities," like modern-day slaveowners. pic.twitter.com/lzWqrUrzuc